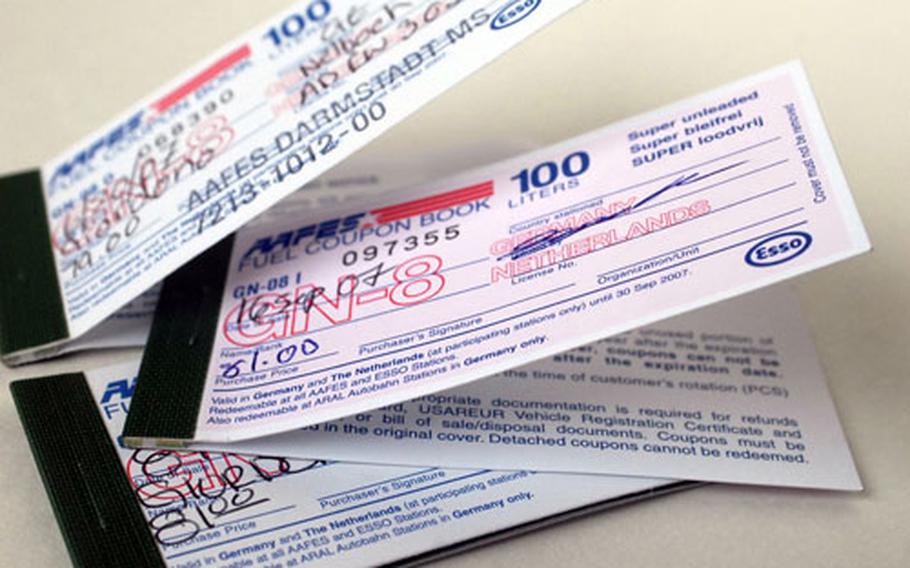 AAFES gas coupons have been extended to Nov. 30, past their normal Sept. 30 expiration date. (Photo Illustration by Michael Abrams / S&S)

STUTTGART, Germany &#8212; New coupon booklets for diesel fuel were delivered this week to many shoppettes throughout Germany, but not before some stores ran out prior to the long Columbus Day weekend.

Fuel coupons that expired on Sept. 30 are supposed to be accepted through Nov. 30 by Esso stations in Germany as well as Aral stations alongside autobahns, according to a spokesman for the Army and Air Force Exchange Service.

Customers who want to buy booklets for unleaded and super-unleaded fuel with coupons good through Sept. 30, 2008, should be able to do so by the end of the month, according to a spokesman for Army and Air Force Exchange Service.

AAFES spokesman Lt. Col. David Konop said Wednesday he had heard of only one instance of a customer not being able to use the expired coupons at a German station.

&#8220;One can never guarantee, even with valid coupons, that no one will ever be refused service,&#8221; Konop said. He noted that there are 1,200 Esso and 120 Aral stations in the country, and not all employees might know they are supposed to accept the expired coupons.

Eligible Department of Defense employees buy the coupon booklets on U.S. installations, and then use the coupons to pay for fuel at much-cheaper U.S. prices at select stations on the German economy.

Diesel fuel, for example, last weekend cost about $3.23 per gallon using AAFES coupons. The price at the pump was 1.16 euro per liter, or about $6.26 per gallon.

Shoppettes in Stuttgart and the Kaiserslautern area were among those last week that ran out of 100- and 200-liter booklets of diesel coupons.

Some stores had only booklets of 25 1-liter coupons, meaning customers who bought them had to fill out 50 or more 1-liter coupons to fill their tank before driving away for a long holiday weekend.

Konop said new diesel coupons that had arrived last week at the AAFES distribution center simply weren&#8217;t distributed to all the stores that were running low.

Konop said he had heard of no instances of stores running out of the expired but still usable unleaded and super-unleaded coupons.

Some stores are offering customers a letter from Esso written in German that can be presented at gas stations that explains the expired coupons should be honored.