Some days, training at Hohenfels is one tough slog 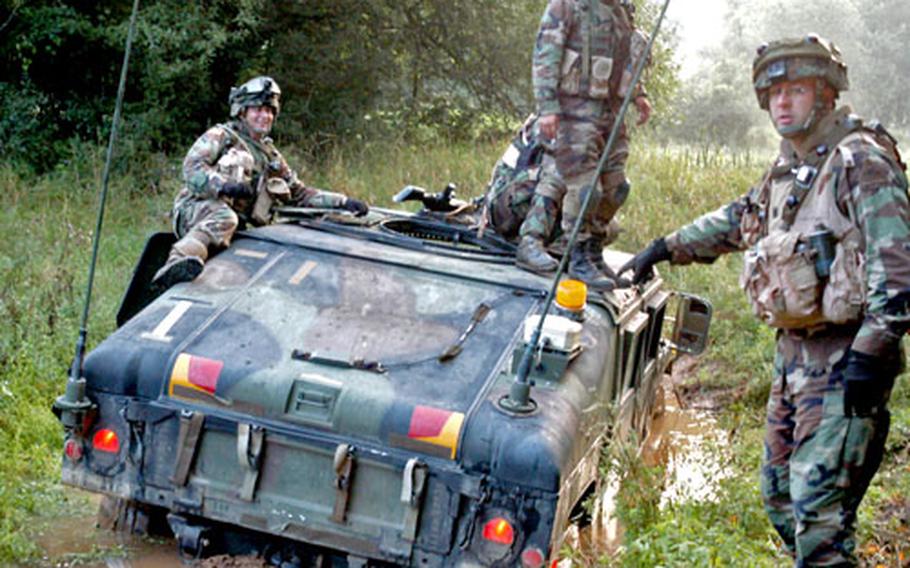 Members of Company B of the 1st Battalion, 6th Infantry Regiment, evacuate their Humvee after it became lodged in a small pond in the Hohenfels training area Tuesday. (Ben Murray / S&S)

HOHENFELS, Germany &#8212; Sometimes training situations play out as planned at the Hohenfels training area, and young troops learn the finer points of soldiering in the Bavarian woods.

And then, sometimes, your Humvee catches fire.

&#8220;That sucker is done,&#8221; said a preferred-to-be-unidentified soldier at the training area Wednesday, standing next a smoldering truck at the edge of a field and pointing at the viscous fluid flowing from the engine.

It&#8217;s a fact of Army life that complicated training scenarios can, and often do, go to pieces when missions wander off the ranch and the simulated mortars start falling.

But it was the punishing rains that pounded southern Germany last week that added an extra dimension of unpredictability for elements of the 1st Armored Division&#8217;s 2nd Brigade Combat Team as it was preparing for a deployment to Iraq.

Hilly, muddy, infested with nettles and short on toilet paper, Hohenfels in any weather is a devilish arena of pitfalls and obstacles guarded by grumpy, biting ants and mosquitoes. But the heavy rains also made the roads the consistency of melted asphalt, which clung to the transports of the Company B of 1st Battalion, 6th Infantry Regiment.

Bounding through field and fen in search of insurgents and intelligence Tuesday and Wednesday, the troops appeared motivated to complete their missions to sneak up on the town of &#8220;Tikrit.&#8221;

But then the lead vehicle of 1st Lt. William Leonard&#8217;s platoon paused at the top of a small rise in swampy area Tuesday. The driver gunned it forward and the Humvee disappeared from view.

They pulled it. They rocked it. They dug great globs of mud from behind the spinning wheels, but the truck wouldn&#8217;t budge.

Still, when a recovery vehicle did manage to extricate the wallowing Humvee a couple of hours later, at least the truck still ran &#8212; which is more than another ill-fated squad of Company B troops could say for two of their trucks the next day.

Following a familiar pattern at the edge of a great pond of dung-colored water, the lead vehicle in a group of three went for a dip and emerged on the far side smoking like an open sauna door. Crippled, it was towed for a ways by the next Humvee, which struggled so hard to pull it through the muck that it broke some important part or another that sailed through the oil pan and set the vehicle aflame.

Injuries and damage were avoided, but it was another uncomfortable scene for an image-conscious Army.