Risa Knight, right, hands change back to shopper Brandt Gardner at the Neubruecke Commissary on Tuesday. The small store on Neubruecke Casern, near Baumholder, Germany, is one of several slated for closure. (Raymond T. Conway / S&S)

Risa Knight, right, hands change back to shopper Brandt Gardner at the Neubruecke Commissary on Tuesday. The small store on Neubruecke Casern, near Baumholder, Germany, is one of several slated for closure. (Raymond T. Conway / S&S) 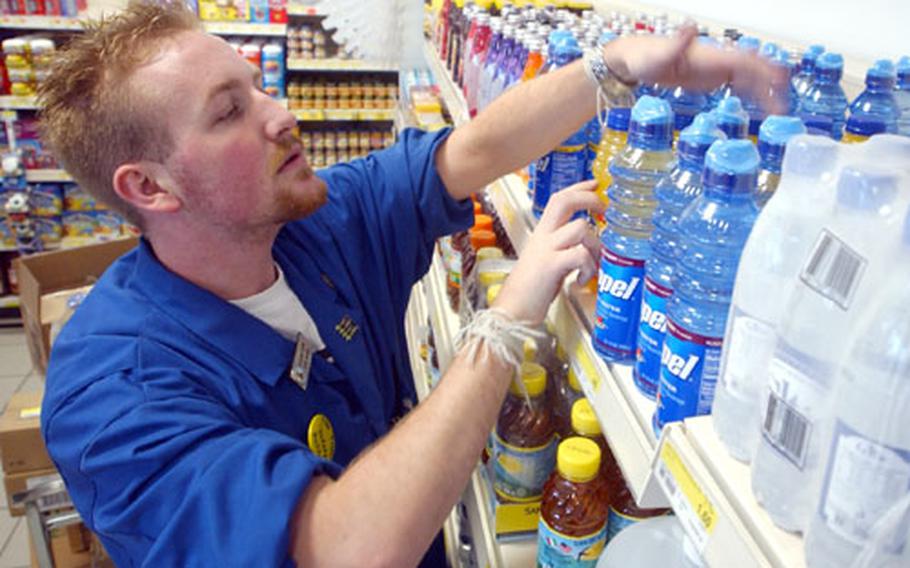 Despite angry opposition from top Army officials, the Department of Defense&#8217;s Personnel and Readiness Office is sticking with cost-cutting plans to close as many as 10 commissaries in Germany, Japan and South Korea before the end of September.

Those targeted for certain closure are Idar-Oberstein, Neubr&#252;cke, and Panzer Casern in Germany; Camp Kure, Sagami Depot and Sagamihara in Japan; and Chinhae Naval Air Station in Korea.

Three others at Kelley Barracks, Stuttgart, Germany; Hario, Japan; and Pusan, South Korea, await the verdict of Pentagon accountants. If they are found to have fallen short of cost-efficiency goals during the fiscal year that ended Sept. 30, then they also will be closed this fiscal year, according to an Oct. 22 Personnel and Readiness Office information paper obtained by Stars and Stripes.

The announcements, not surprisingly, have been met with gloom in the affected communities, several of which are home to units currently deployed to Iraq.

Brandt Gardner, a former soldier who now works for the Department of Defense, likes the Neubr&#252;cke commissary because of its convenience and small-town flavor.

A DOD policy memo signed in June 2001 apparently will lead to its doom. The memo directed the Pentagon&#8217;s Commissary Operating Board to evaluate each of the Defense Commissary Agency&#8217;s 275 stores worldwide.

One condition to stay open is that a commissary serves at least 100 active-duty servicemembers, a standard not met by Chinhae and the three commissaries in Japan. Another is that it be at least 20 miles or 30 minutes&#8217; travel time away from other commissaries. Idar-Oberstein and Neubr&#252;cke are 12 and 10 miles, respectively, from Baumholder, and Panzer sits 8 miles from Stuttgart&#8217;s Patch Barracks.

Hario, Kelley and Pusan face closure because the Personnel and Readiness office considers them financially marginal.

Ron Kelly, a DECA spokesman, said recent analysis shows all 10 of the targeted commissaries have met the Pentagon&#8217;s financial accountability standards for 2003. He said DECA is awaiting word on the fate of the stores.

Charles Abell, the principal deputy undersecretary of Defense for Personnel and Readiness, notified the services of the planned closings late last summer, but they didn&#8217;t become public knowledge until last month.

&#8220;I appreciate the difficulty of decisions to close commissary store operations,&#8221; Abell wrote in his Aug. 29 memo to the assistant secretaries of the Army, Navy and Air Force. &#8220;In view of the DECA shortfall, we can no longer justify marginal stores in close proximity to another commissary.&#8221;

But the Pentagon&#8217;s bottom-line decision making didn&#8217;t sit well with Gen. B.B. Bell, commander of U.S. Army Europe. In a scathing memo to Abell last month, he said it is wrong to add to the stress of families with deployed servicemembers.

&#8220;To close these facilities which are operated for local military families, at a time when military sponsors are deployed to hostile-fire environments, in my view approaches the unconscionable,&#8221; Bell wrote.

&#8220;Seeking relatively minor fiscal efficiencies through reduced services and loss of benefits in this overseas environment during a war erodes the commitment we have made to the total force.&#8221;

Bell said the small commissaries employ only a few people each. The Panzer and Kelly stores relieve an already overcrowded one at Patch Barracks in Stuttgart. The commissaries at Idar-Oberstein and Neubr&#252;cke both serve remote housing areas 20 minutes away on narrow, winding roads from the large 1st Armored Division base at Baumholder.

U.S. Sen. Hillary Clinton, D-N.Y., cited Bell&#8217;s memo Nov. 19 at a Senate Armed Services Committee hearing in which she expressed anger over the planned closing of the commissaries. She also decried the Pentagon&#8217;s study of turning over 58 Department of Defense schools in the United States &#8212; including those at Fort Campbell and Fort Knox, Ky.; Fort Bragg and Camp Lejeune, N.C.; and Fort Stewart, Ga. &#8212; to local school districts.

Criticism from military leaders, senators and servicemembers apparently hasn&#8217;t affected the Pentagon&#8217;s plans. No dates have yet been set for the closures, but Abell&#8217;s memo directed DECA to shut them down before the fiscal year ends Sept. 30, 2004.

Joyce Raizer, governmental affairs director for the National Military Families Association, said the Commissary Operating Board this week came out against any closing.

As the Department of Defense looks for ways to save money, it is considering closing a number of commissaries overseas by Sept. 30.

&#182;Nineteen other commissaries could close if their financial picture doesn&#8217;t improve. Five of them are overseas: