Some benefits to go from free to fee 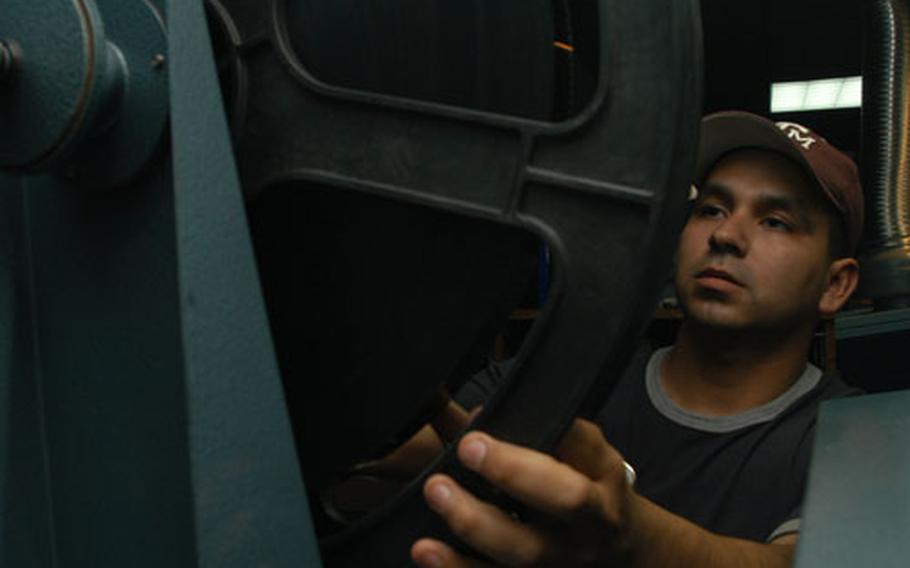 Petty Officer 3rd Class Manuel Gallegos, 27, a projectionist at the movie theater at Capodichino in Naples, Italy, threads a movie through the reels. Starting Aug. 1, theatergoers at Navy bases with 35 mm movies will have to pay for tickets. (Kendra Helmer / S&S)

Navywide budget cuts aimed at helping modernize the fleet will mean sailors will have to pay for some benefits that had been free and shell out more for others.

For the first time in years, some bases in Europe will charge admission to see a movie or swim at the community pool.

Golf fees could go up, child care is expected to rise and fees for youth sports will more than double at some places. At many naval stations, the changes will go into effect next month.

Additional budget shortfalls the following fiscal year could pressure commanders into cutting some services and charging more for others to make ends meet and keep popular quality-of-life program afloat.

Earlier this year, the Navy&#8217;s top officer, Adm. Vern Clark, called on commanders to be more frugal with resources so the Navy could put the savings toward modernization.

Rear Adm. Lewis Crenshaw, who took over this month as commander of Navy Region Europe, said the goal is to guarantee bases offer a &#8220;great quality of service&#8221; while at the same time ensuring they are &#8220;doing things smart.&#8221;

Smaller base budgets worldwide are the result of the Navy shifting dollars to what commanders have called &#8220;recapitalization.&#8221; The cuts are aimed at freeing up enough money so the Navy can overhaul its bases, ships and war-fighting gear for the future.

Proposed operations and maintenance budgets for fiscal 2004, Navywide, is expected to be $1 billion less this fiscal year, going from $34 billion to $33 billion. In 2005, the Navy is asking to raise the budget back to $34 billion.

While Congress has not finalized the 2004 budget, some bases and programs are bracing for less money.

&#8220;They know [budget cuts] are coming, so rather than being caught, they&#8217;re able to keep services going while they deal with how to implement the cuts,&#8221; said Lt. Cmdr. Carla McCarthy, spokeswoman for Navy Region Europe.

The Navy will not release figures on how much money is projected for bases in Europe in 2004 and 2005, but the effects of the expected fiscal crunch are beginning to emerge from Spain to Crete.

Some of the most visible changes will be in Morale, Welfare and Recreation programs, said Larry Warnken, Navy Region Europe&#8217;s MWR program manager.

The programs will take a hit in two sources of funds appropriated by Congress: recreation and child care.

Charging fees for some programs is the only way bases will be able to continue to offer those services, officials say.

All 8 mm Navy motion picture sites, including the theater in Bahrain and many Liberty Single Sailor facilities, will continue to provide free movies.

Theaters didn&#8217;t charge entry fees the past four years because of increased appropriated funds within the morale and recreation budget.

On a recent evening, Petty Officer 3rd Class Andy Bullock and his wife, Trista, sat in the back row of the movie theater at Capodichino in Naples with their baby, Brendan.

&#8220;I thought it was pretty cool to be able to do something where you can take your baby and if he gets fussy and you have to leave, you don&#8217;t lose any money,&#8221; Trista Bullock said. She said that though the admission fee may keep her from going to the movies as often, $3 a ticket is a good deal.

Child-care fees also may increase, but Warnken said it would not happen until February. The fees are based on total family income.

Some commanders are preparing personnel for the spikes in fees.

Last Thursday, Capt. John Orem, commander of U.S. forces in Rota, explained some of the changes in his weekly column in the base paper and at a town-hall-like meeting. He said he has to generate $380,000 more MWR revenue than last year to keep programs going.

In 2005, the base will have to raise even more. Recreation programs will face a $680,000 shortfall, which could mean eliminating some services.

Morale and recreation programs aren&#8217;t the only ones taking a financial hit.

Other departments, from supply to religious ministries, are preparing for less money this coming fiscal year.

The dilemma those departments face is that they cannot make money like some recreation programs.

Many of the changes in services are at the discretion of the base commander.

No decisions have been made in Sigonella, said Lt. Steve Curry, base spokesman. But bases in Rota and Naples have taken steps to save money.

In Naples, additional changes include a reduced summer bus schedule, cuts in FitZone hours and relocation of school-age care from Carney Park to the Gricignano support site, said Lt. Susan Henson, base spokeswoman.

In Rota, fees for youth sports will go from $10 to $25 and the fitness center will charge nonmilitary people for some programs.

&#8220;I would expect people will see this as a reduction in the quality of some of their experiences because they will have to pay now where they didn&#8217;t have to pay before,&#8221; Warnken said. He said the alternative to having people pay for the service is to shut it down.