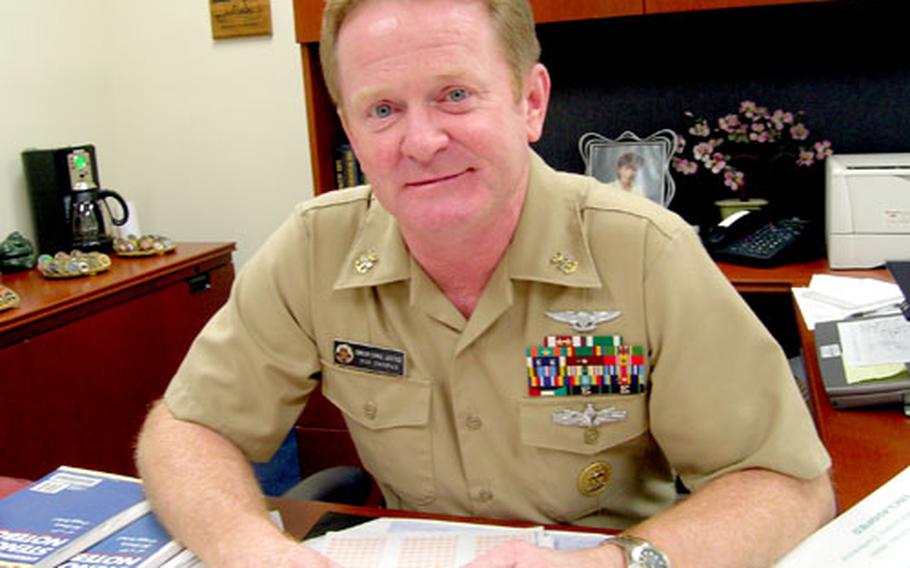 While not an official instruction, liberty plans are encouraged at the command level for sailors ranked E-5 and below at Naval Air Facility Atsugi, says Command Master Chief Chris Justice. (Allison Batdorff / S&S)

While not officially mandated at NAF Atsugi, liberty plans are a part of gearing up for the weekend for many sailors ranked E-5 and below, said Command Master Chief Chris Justice.

A liberty plan is a &#8220;tracking tool&#8221; to monitor sailor behavior and is intended to prevent incidents out in town, he said. Atsugi has been discussing liberty plans since 2004, but more units on base have been requiring them in recent years, Justice said.

Sailors write down what they&#8217;ll be doing Friday through Sunday then turn the plan over to their chain of command. If the plan includes drinking alcohol off base, leadership will likely ask such questions as &#8220;Who is your liberty buddy?&#8221; and &#8220;Who is driving? How are you getting home from the bar, etc.&#8221; Justice said.

Changes can be made but require a phone call to the chief petty officer or on-duty leadership, Justice said.

Liberty plans are just one way to do this, said Justice, adding that junior sailors also have liberty buddy requirements and good behavior is emphasized in area orientation briefs, television announcements and through leadership mentoring.

The base also has an alcohol-related incidents prevention council that strategizes different ways to reduce the number of problems, said Atsugi spokesman Brian Naranjo.

According to Naranjo, the emphasis appears to be working as Atsugi has gone 66 days without a drinking-and-driving violation. Justice added that he believes alcohol-related incidents have decreased overall due to education and more &#8220;intrusive leadership.&#8221;

While Petty Officer 2nd Class Antonio Javier&#8217;s unit does not do liberty plans, his leadership does Friday announcements about weekend Morale Welfare and Recreation activities, plus warnings about alcohol, he said. &#8220;They tell us if we&#8217;re drinking to plan accordingly and encourage [us] to take advantage of the MWR activities&#8221; Javier said. &#8220;I&#8217;m pretty busy at school right now, but I find the information helpful.&#8221;