Some Americans serving in the U.K. prefer owning over renting 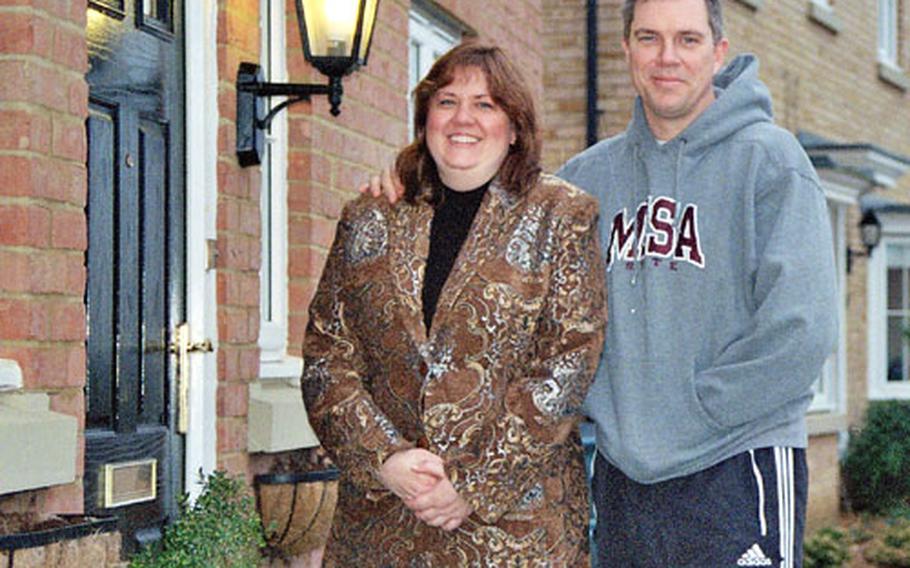 Cynthia and Tom Harrison opted for American size with English class when they bought their home in Ely. (DeeDee Doke / Special to S&S)

Cynthia and Tom Harrison opted for American size with English class when they bought their home in Ely. (DeeDee Doke / Special to S&S) Tech. Sgt. Angela Willis plays with her 6-year-old daughter, Jade, and their dog, Sheba, in front of the semi-detached house that she bought in Beck Row. (DeeDee Doke / Special to S&S)

Tech. Sgt. Angela Willis lives and works in England, but she&#8217;s using her Air Force housing allowance to buy a piece of the American dream &#8212; a home for herself and her daughter, Jade, just minutes away from her workplace at RAF Mildenhall.

Willis ignored the naysayers and is the proud owner of a two-story, three-bedroom, 1&#189;-bathroom home, which she bought new last year for 148,500 pounds (about $258,500). The price may seem steep, but her housing allowance covers her 882-pound monthly mortgage payment as well as her utilities, and Willis said it&#8217;s clearly an investment in her future.

If she sells her house when she leaves the United Kingdom, she will have enough equity to finance a down payment for a home in the States. If she keeps it, she could rent it out, and renters&#8217; payments could cover the mortgage, potentially growing her investment.

Willis is not the only American to have bought a home while assigned to a U.K. base, and local bankers hope even more will do so.

American servicemembers and civilians are an attractive niche market for mortgage providers, because they&#8217;re professionals, have a steady source of income and their housing entitlements make house-buying a natural form of investment with a tangible benefit.

An all-too-strong pound, post-Sept. 11 jitters and rising house prices contributed to fewer home purchases by Americans in the past five years than in the mid- to late 1990s. But the practice is picking up again as money-savvy Americans consider making their entitlements work for them instead of simply lining landlords&#8217; pockets.

Cynthia Harrison, a civilian assigned to RAF Alconbury, and her husband, Tom, are now on their second U.K. house, this time a five-bedroom home in picturesque Ely. The couple and their three children have lived in England since 1994. Six years ago, the Harrisons decided buying would help them earn equity toward a stateside purchase.

&#8220;The biggest hurdle was getting the down payment,&#8221; Cynthia Harrison recalled.

But that initial investment paid off. When they sold that home &#8212; in Kettering, Northamptonshire &#8212; three years ago to move closer to Tom Harrison&#8217;s job in Mildenhall, surging house prices meant they were able to sell it for about twice the original purchase price.

House prices in the United Kingdom skyrocketed between 1997 and 2002, which left many sellers with significant gains on their initial investments. Since then, the Bank of England has warned that housing in England is &#8220;overvalued,&#8221; and some financial observers have suggested for several years that a housing market crash was on its way.

That crash has not yet materialized. In a Feb. 16 report on the U.K. housing market, the Royal Institution of Chartered Surveyors reported that house prices in East Anglia, where the major U.S. air bases are located, had increased for the first time overall since July 2004. The Centre for Economics and Business Research, an economic think tank, has predicted that house prices across the United Kingdom will rise by an average of 4.4 percent in 2006.

Although some Americans have, in Webster&#8217;s words, &#8220;benefited significantly&#8221; from the rising prices, not everyone makes a killing on the U.K. housing market. Cynthia and Tom Harrison said they don&#8217;t expect to enjoy the same flush return on the sale of their second home as they did on their first, but they would like to break even.

One way potential buyers can explore neighborhood price trends is to go to www.nethouseprices.com and plug in the name of the street where the house they want to buy is and the name of the town and it will display what houses around that location have sold for in recent years. If the house is new, however, that tool won&#8217;t necessarily help.

Prices of homes in villages adjoining the bases have not risen as dramatically as those of houses in the area&#8217;s small cities, such as Bury St. Edmunds, Ely and Thetford, which have shopping centers and good transportation links.

Capt. Aaron Beam, of the 727th Air Mobility Squadron, chose the Norfolk village of Feltwell to live in so his four children would be near their schools at RAF Feltwell, instead of choosing for the price advantage.

&#8220;We knew it would be really expensive to buy a house [in England], but it was definitely in the back of our minds before we moved here,&#8221; Beam said.

The Beams also own a home in Arkansas, but it was important to buy a home in England, Beam said, to make their children feel at home while they lived abroad. Last year, they bought a 70-year-old house from an American family who moved to Japan, and Beam repainted the kids&#8217; bedrooms in their favorite color to reinforce that homey feeling.

&#8220;This gives us the freedom to decorate any way we like,&#8221; the maintenance operations officer said.

The purchase was a great deal in a couple of ways. Two months after they bought their home, Joe Simon won a new car from the couple&#8217;s real estate agent in a drawing of customers who had bought or sold houses through the company that year. Plus, because of their dual-military benefits, the Simons could afford to take out a 15-year mortgage, so they will actually own the home sooner rather than later.

Tanya Simon is so sold on the prospect of U.K. home ownership that she plans to spend an upcoming $30,000 career bonus on buying a second home as a rental property.

Source: Land Registry of England and Wales, for the period of October to December 2005, updated Feb. 13.

Some important tips to remember:

¶ Three years is the preferred minimum tour of duty remaining at the time of application, although remaining tours of two years and nine months often will be approved.

¶ A satisfactory reference is required from your commanding officer.

¶ A 95 percent mortgage is usually the maximum permitted.

¶ Home-buying in England differs from buying a house in the States. Examples: You’ll need a solicitor, or lawyer, to handle the sale, and a buyer or seller can back out up until the very last minute before the final paperwork is signed or contracts exchanged.

¶ A seller may accept your offer on a house and then reject it in favor of a higher offer.

¶ To make the most money from your investment, buy a house in a location that is attractive to British buyers as well, with shops, other amenities and good transportation links nearby.

¶ If you want a charming old English house, remember that it may be difficult to buy insurance for, say, a thatched-roof cottage.

¶ Buying a new house will provide some buyer protection in the form of a warranty for a certain number of years.