Some Americans prefer to send younger kids to British schools 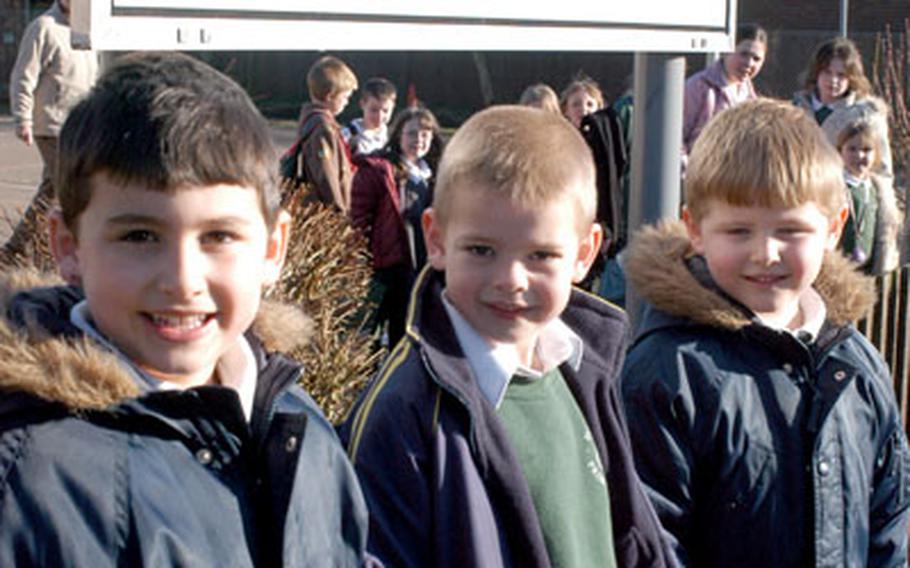 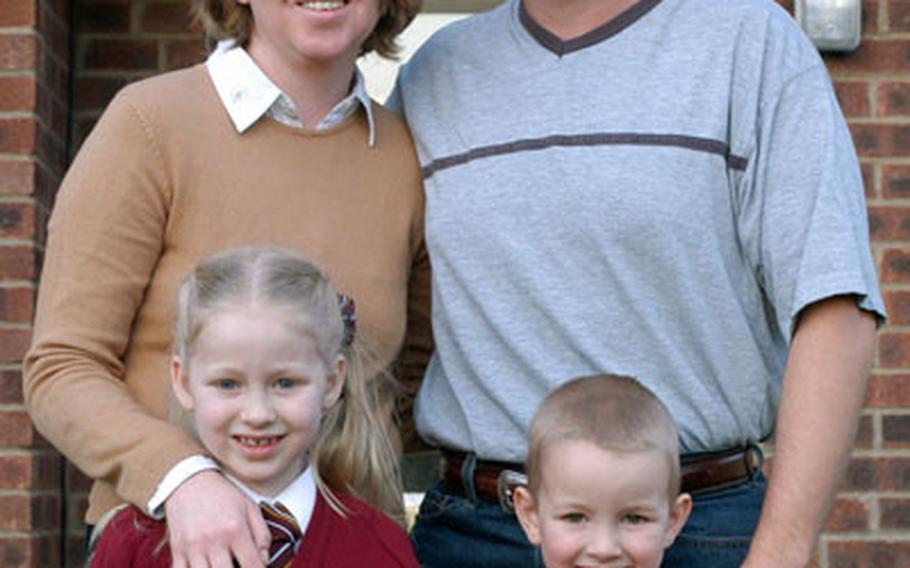 Kallie and Tech. Sgt. Kevin Hollyfield stand with their children Madison, 7, and Coltin, 5, outside their family home in Newmarket, where the children go to St. Louis Roman Catholic Primary School. (Ben Murray / S&S)

For American Air Force mom Maria Hill and her husband, Tech. Sgt. David Hill, the decision to send their son, Devon, to an English primary school instead of a Department of Defense Dependents School in 2003 was easy.

Devon, then 4, was just a few days too young to get into Lakenheath Elementary School near his home, potentially pushing back the start of his education for a full year.

&#8220;He would have had to wait out a whole school year for four days,&#8221; Maria Hill said. That potential delay pushed the Hills to send Devon and his younger brother, Trevor, to Great Hockham Primary School, a tiny British school in a rural town near Thetford, about 20 miles from Lakenheath.

There, Maria Hill said, the boys enjoy small class sizes &#8212; just 28 kids in the first three grades &#8212; an extensive reading program and the intangibles of immersion in another culture.

The Hills&#8217; decision to send their sons to a local program is not uncommon among American families in England. According to enrollment estimates from the Suffolk County Council, there are about 380 American students in the Mildenhall school district alone.

The majority of those students, about 240, are in the six primary schools in the area, with about 100 Americans in the three middle schools and around 40 in the upper grades, according to council figures.

The DODDS Lakenheath and Feltwell elementary schools alone, by contrast, enroll more than 1,100 students. With a grand total of just under 4,300 DODDS students in England, the percentage of American students drawn away from on-base schools is low, comparable to the number pulled out to be home schooled, said Linda Curtis, DODDS Isles District superintendent.

Though parents who send their kids to English schools said they do so for a wide variety of reasons &#8212; from cost-free entrance to academic preferences and social benefits &#8212; many had two central motivations: British schools allow kids to start earlier and appear to have more accelerated academic programs for young students.

Petty Officer 1st Class Sonya Taylor, based at Commander, Naval Activities United Kingdom near London, said she sends her 4-year-old daughter, Desiree, to a half-day British nursery specifically to give her a head start.

At her daughter&#8217;s age, the only on-base option is to send her to a Child Development Center, where the caretakers aren&#8217;t licensed to teach, she said.

Currently, the 4-year-old is learning a letter and a number a week, work Taylor would equate with kindergarten-level work in American schools, she said.

Others said they chose an English school because they can offer the option of public, faith-based programs.

&#8220;In the States, you pay for a Catholic education,&#8221; Kevin, who attended Catholic school himself as a child, said.

The teachers at St. Louis are stern and traditional disciplinarians, the couple said, and it&#8217;s smaller and closer to home than Lakenheath Elementary, which enrolls about 700 students. The curriculum, too, seems more accelerated than an American program, the Hollyfields said.

When Madison first transferred into St. Louis midway through an American kindergarten program, for instance, she joined kids of similar age who were well ahead of her, working through the middle of the British equivalent of first grade, her parents said.

&#8220;I think they also throw a little bit more at them because they finish sooner,&#8221; Kevin Hollyfield said.

Now in her second year at St. Louis, Madison has already had a year of French, and is working on improving her vocabulary, the 7-year-old said.

But there are disadvantages to having kids in the British system, parents said. Vacations and school breaks don&#8217;t often line up with American ones or traditional U.S. holidays, such as Thanksgiving. Some subjects, too, are conspicuously absent from later grades: American history and civics.

The differences in the systems also lead to another trend among American parents: Many said the older the kids get, the more likely they are to put them into DODDS schools.

The reasons are twofold, according to parents. First, American kids are required to go to school longer than the British, who can quit at 16, and U.S. programs generally have more diverse subjects in high school, parents and students said.

Nicole DeChant, the daughter of an American servicemember in England who attended British schools all the way through, said kids in local high schools don&#8217;t participate in sports and social activities the way American students do.

DeChant, now 22 and finishing a university degree in psychology, said she thought the academics in her schools were on par with American programs, but she missed social highlights of a U.S. school, such as going to a homecoming game or a prom.

The structure of the British high school system can also be a deterrent to American parents. According to DeChant, English students have the option of bowing out at 16, and those who stay in whittle their subjects down to just four topics at that stage, cutting the total to three the following year.

But the later years are also the ones parents have to watch most when thinking of transitioning kids from British to American schools, Isles District chief of staff Judy Allen said.

To graduate from a DODDS high school, students have to compile a certain number of credits that start accruing in the ninth grade, Allen said, a fact parents should heed when choosing where and when to send their child to school.

While skills are transferable between the two systems, parents should make sure large gaps don&#8217;t form between a British education and American requirements if they want kids to graduate without &#8220;undue duress,&#8221; she said.

Allen said she wasn&#8217;t aware of any typical areas where students show significantly disparate skill levels, however, noting that students entering DODDS are evaluated on an individual basis.

An inherent benefit, DeChant and other families agreed, is the one kids get from growing up half in a different society.