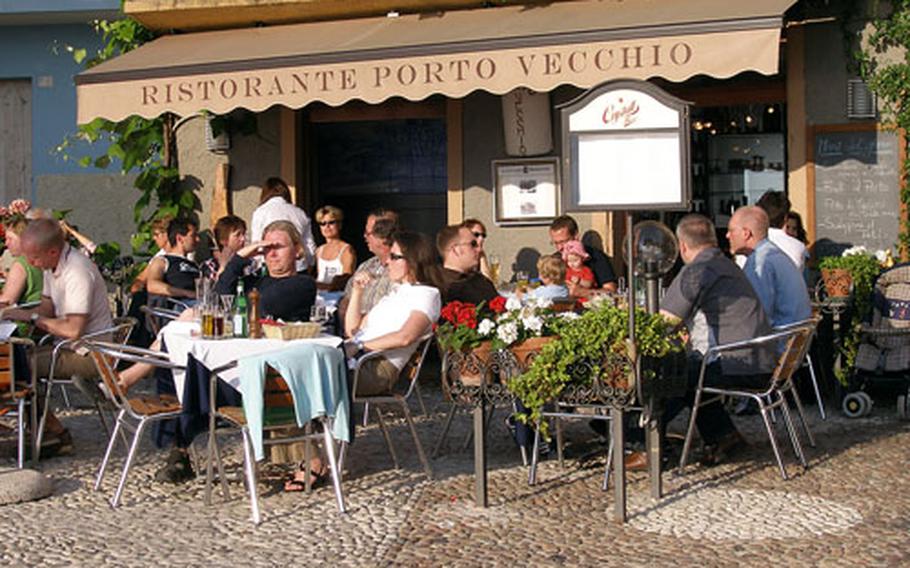 People enjoy the sun and cuisine on Lake Garda at a restaurant on the old port of the medieval town of Malcesine, Italy. According to Cambridge University researchers, Italians are the least happy people in Europe. (enw# 61p rb) (Michael Abrams / S&S)

With some of the world&#8217;s best cuisine, beaches, beautiful people and panoramic vistas, what&#8217;s not to like?

Something, apparently: Italians, Portuguese and Greeks are among the unhappiest people in Europe, according to Cambridge University researchers.

If that&#8217;s the case, then add great acting to Italians&#8217; long list of accomplishments, said short-term resident Geoff McGarrigle, who let out a guffaw Wednesday after learning a survey found Italians are the unhappiest people in Europe.

&#8220;Italians seem to be the happiest in Europe, bar none. Even the language is happy. All the pregos, grazies, buona seras. They are so kind,&#8221; said McGarrigle, who has visited the southern Mediterranean country a half dozen times.

Denmark&#8217;s citizens ranked the happiest in Europe, according to data culled in part from the annual European Social Survey and analyzed by a Cambridge team led by Luisa Corrado.

Respondents ranked factors thought crucial for individual happiness, such as reliability of friends, relations with neighbors, job security and satisfaction, and faith in institutions like the government and police, Corrado said.

Denmark ranked high because respondents generally were well off, with good job security, strong social networks and trust in the institutional bodies such as the government, an area where Italy scored low, Corrado said.

Italians grapple with governments regularly near collapse, smog problems that force traffic blackouts in major cities, high unemployment and a large illegal immigrant population &#8212; all of which lead to a general distrust in the government, public services and law enforcement agencies.

In spite of all that, Antonio Fontana, a groundskeeper at the U.S. Army base in Vicenza, expressed surprise by the survey results.

A factor common to high-scoring countries on the list was a general acceptance of cultural diversity, Corrado said.

Where Italy did score high &#8212; the highest in Europe, in fact &#8212; was in strength of family bonds, Corrado said, an important factor, but not enough to lift it off the bottom of the list.

Being at the bottom was also relative, Corrado said. Though Italy was the worst rated of the 15, it still scored 6.27 out of 10 on the happiness scale.

In the end, however, the happiest person in Europe, Corrado said, was likely to be a young northern European either married or with a long-term partner and strong family connections, plus reasonable financial security, trust in the government and general optimism. The moral: Sun and money are great, but may not make you happy.