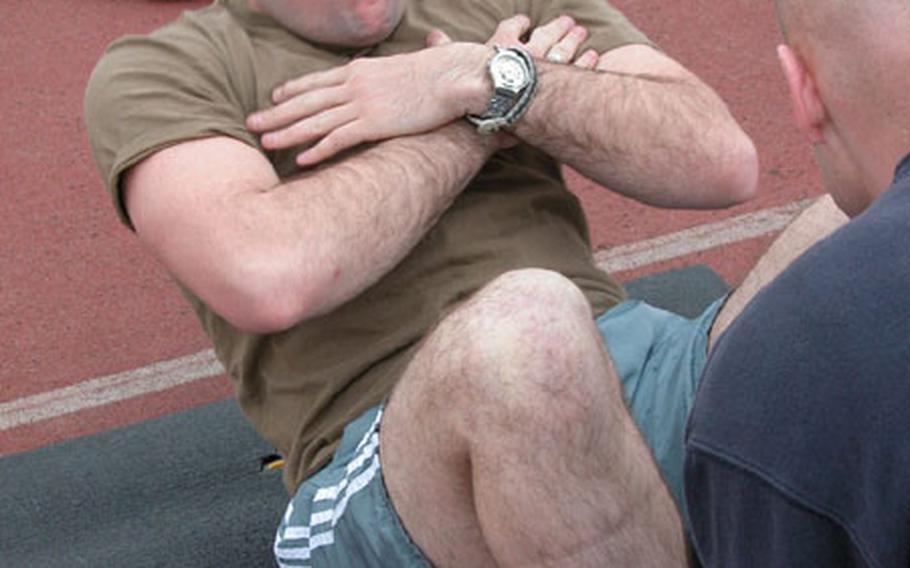 Staff Sgt. Quinton Hunt of Hokah, Minn., and with the 31st Maintenance Squadron, fights to do one last crunch Friday as part of his Air Force fitness test at Aviano Air Base, Italy. (Charlie Coon / S&S)

The new test bases 50 percent of airmen&#8217;s scores on their run time and 30 percent on their waist size. The sit-ups and push-ups count 10 percent each. The test replaced one that measured airmen&#8217;s heart and breathing rates while they rode a stationery cycle.

&#8220;It&#8217;s definitely more challenging, for sure, than the bike test,&#8221; said Tech. Sgt. Christopher Aspen of Virginia Beach, Va., and the 31st Maintenance Squadron, after finishing his test Friday at Aviano.

Airmen who flunk the new test with a score of 69.9 or lower are required to enter a five-day-per-week training program and are retested until they get their score above the &#8220;poor&#8221; rating.

The first batch of results could have been worse, according to Minda Smither, fitness program manager for the Aviano-based 31st Fighter Wing.

Some in-shape airmen claimed the cycle test, in which they either passed or failed, was unfair because it measured fitness only after a person had been on the bike long enough to reach a target heart rate.

Well-conditioned airmen took longer to reach the elevated heart rate, they said, and therefore were more worn down after reaching it, when the test began.

Smither said out-of-shape airmen who are scrambling to get fit before their test should pace themselves.

Overtraining can cause back, knee and ankle injuries and even heart attacks, Smither said.