Some AF lodging rates to go up, others to drop in fiscal ’14 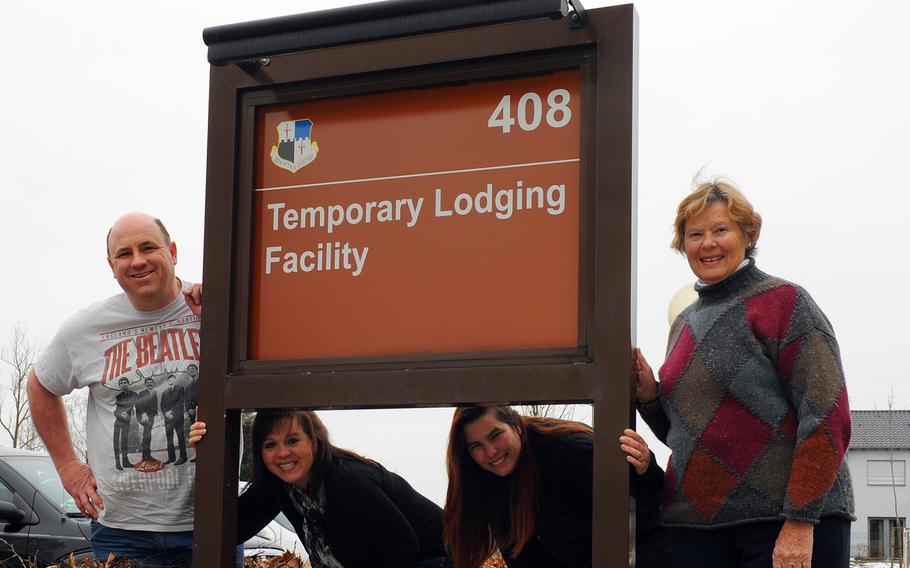 Airman's Attic volunteers at Spangdahlem Air Base, Germany, pose for a picture by their building sign on Feb. 28, 2013. (Kevin Nichols/U.S. Air Force)

KAISERSLAUTERN, Germany — Air Force lodging rates will change again Oct. 1, with prices for visiting-airman and -officer quarters and standard temporary-lodging rooms to increase by a quarter for some airmen and $5.50 per night for others.

Rates for larger temporary-lodging facilities and distinguished-visitor rooms, meanwhile, will dip, some significantly, according to Air Force officials.

A year ago, the Air Force for the first time in four years raised its rates for all room types at its 88 lodging locations worldwide. Some room categories jumped as much as 51 percent, with the Air Force at the time attributing the higher costs to the need to fund costs for operations, room renovations and construction.

This go around, the Air Force is bumping up rates for the most common room categories. Starting in fiscal 2014, visiting-officer quarters/visiting quarters — rooms for officers or civilians traveling on official business — will go from $53.25 to $56 a night. Airmen will pay 25 cents more per night, with visiting-airman quarters costing $42.25; two years ago, those rooms were $34.75 a night. Temporary lodging — for military personnel and their families when moving to a new duty station — goes from $55 to $60.50 per night.

Military personnel and their families traveling for leisure may also stay at Air Force hotels if space is available.

All new lodging rates are within per diem levels for all locations, according to Air Force officials.

With fewer dollars due to the automatic, across-the-board spending cuts known as sequestration, the Air Force is looking to cover most routine operational expenses — such as linen cleaning, housekeeping, TV and Internet, room repairs and security — incurred by its lodging facilities with self-generating, nonappropriated funds, instead of money appropriated by Congress, according to the service.

Rates “were adjusted to accommodate increased operational costs while ensuring consistent delivery of service to our customers and promoting maximum occupancy rates” in Air Force lodging, Capt. Erika Yepsen, an Air Force spokeswoman at the Pentagon, said in an email.

But this time, despite the budget crunch, the Air Force isn’t extending the fee increase across the board.

Rates for larger temporary-lodging facilities – three bedrooms or more – and those for distinguished visitors are dropping after rising significantly at the start of last fiscal year, Air Force officials said. In a memorandum earlier this month, Kathy Watern, deputy assistant secretary for cost and economics, said after adjusting lodging rates in fiscal 2013 for certain costs, the Air Force “refined some of the factors,” driving an overall fiscal 2014 decrease to large temporary-lodging facilities and distinguished-visitor rates.

Rates for large distinguished-visiting-officer quarters — for colonels and above and chief master sergeants — are decreasing from $83.50 to $61.50 per night. Distinguished-visiting-airman quarters — “chief suites” for chief master sergeants — will cost $44.75 per night, down from $54. The most expensive rooms, those for generals and high-level civilians, will cost $61.50 per night, down from $83.50, according to the Air Force.