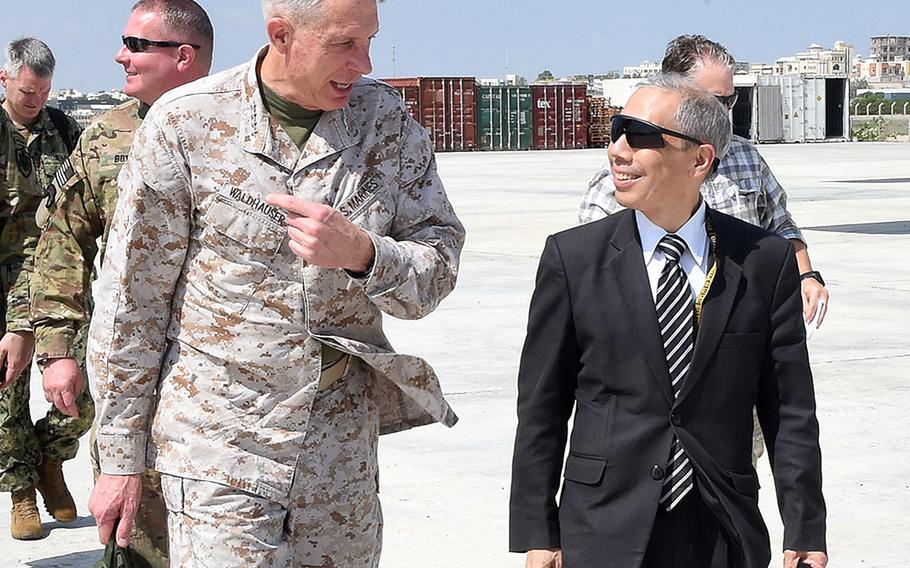 Marine Gen. Thomas D. Waldhauser, commander of U.S. Africa Command, speaks with U.S. Ambassador to Somalia Donald Yamamoto at the Mogadishu airport Nov. 27, 2018. During his visit, Waldhauser also met with Somali President Mohamed Abdullahi Mohamed. The Pentagon denied Monday that there is a plan to reduce its mission in Somalia and cease airstrikes against militants in the country. (Nick Scott/U.S. Navy)

STUTTGART, Germany — The Pentagon on Monday denied reports of a looming drawdown in Somalia, saying there is no plan to cut back the mission in a country where U.S. Africa Command continues to carry out airstrikes.

“There have been no recent policy changes regarding U.S. operations in Somalia,” Pentagon spokeswoman Cmdr. Candice Tresch said in a statement. “We continue to support the Federal Government of Somalia’s efforts to degrade al-Shabab.”

The denial comes after NBC reported Friday that planning is underway to pull back in Somalia, where U.S. special operations troops have been a steady presence for several years. The U.S. also conducts regular airstrikes against the militant group al-Shabab.

The network reported that the Pentagon wants to curtail airstrikes and hand the mission off to the CIA. “I would say we’re running out of targets,” an unnamed U.S. defense official told NBC.

The Pentagon says it has about 500 military personnel in Somalia, where AFRICOM conducted 47 airstrikes in 2018 and 35 the year before.

AFRICOM launched its first airstrike of 2019 in Somalia on Wednesday.

Citing unnamed defense officials, NBC said it was unclear how many troops would remain in the country if the plan goes into effect. The reported shift away from Somalia is at odds with a recent Pentagon announcement that it will cut back 10 percent of its force in Africa but leave largely intact its mission in Somalia. The U.S. also recently re-established a permanent diplomatic presence in the country.

Overall, U.S. counterterrorism policy is in a state of flux. In addition to plans to reduce some missions in Africa, the Trump administration reportedly has plans to cut 7,000 troops in Afghanistan and downsize significantly in Syria.

Last month, President Donald Trump’s announcement that he would immediately pull all forces out of Syria prompted the resignation of Defense Secretary Jim Mattis.

But on Sunday, National Security Adviser John Bolton told reporters in an apparent policy reversal that there was no rush out of Syria. Elimination of all ISIS militants and a promise from Turkey not to harm Kurdish partners were preconditions for any American withdrawal, Bolton said.