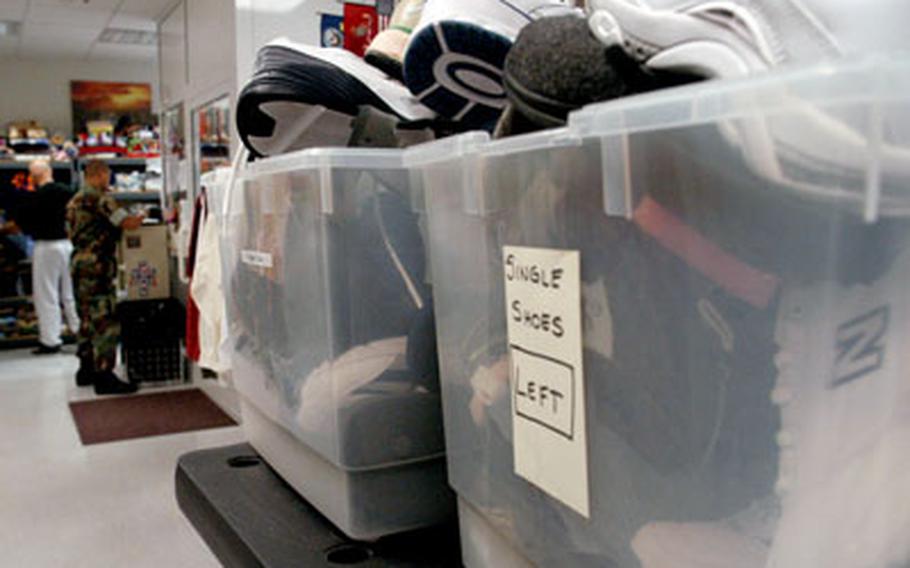 Within the chaplain&#39;s closet at Landstuhl Regional Medical Center are two bins filled with shoes with no mate. The single sneakers are meant for amputees evacuated to the hospital. (Seth Robbins / S&S)

Within the chaplain&#39;s closet at Landstuhl Regional Medical Center are two bins filled with shoes with no mate. The single sneakers are meant for amputees evacuated to the hospital. (Seth Robbins / S&S) 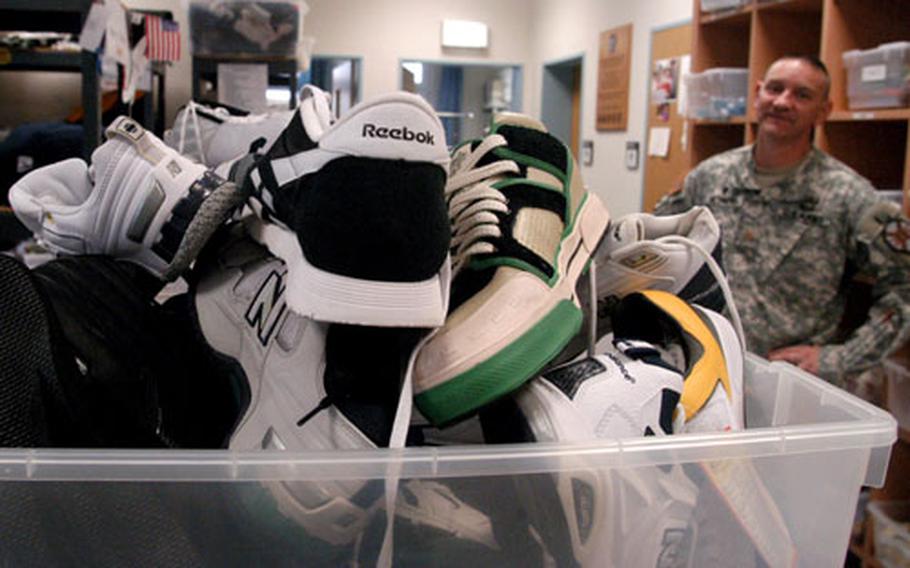 Army Chaplain (Maj.) Eric R. Meyners looks over bins filled with shoes in the chaplain’s closet at Landstuhl Regional Medical Center in Germany. Meyners says he doesn’t notice the mateless shoes, which are meant for amputees, when he’s at work. But when he explains the purpose of the shoes during tours, visitors always fall silent. (Seth Robbins / S&S) 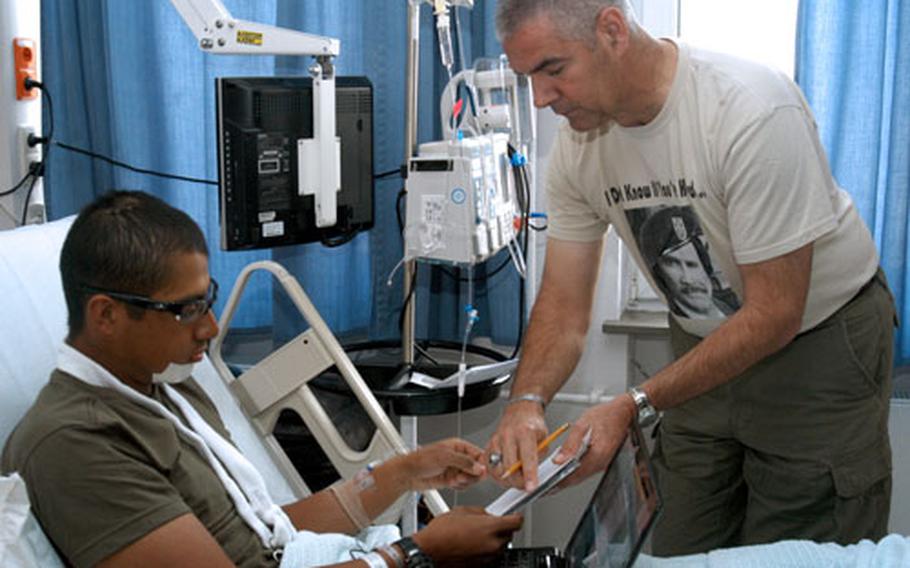 Joseph Bowser, staff assistant to the secretary of the Army, gives his phone number to Lance Cpl. Pedro Alvarez, who was injured while serving with the Marines in Afghanistan. Bowser, who lost his right leg after a bomb blast in 2004, toured Landstuhl Regional Medical Center, talking to wounded servicemembers. (Seth Robbins / S&S) 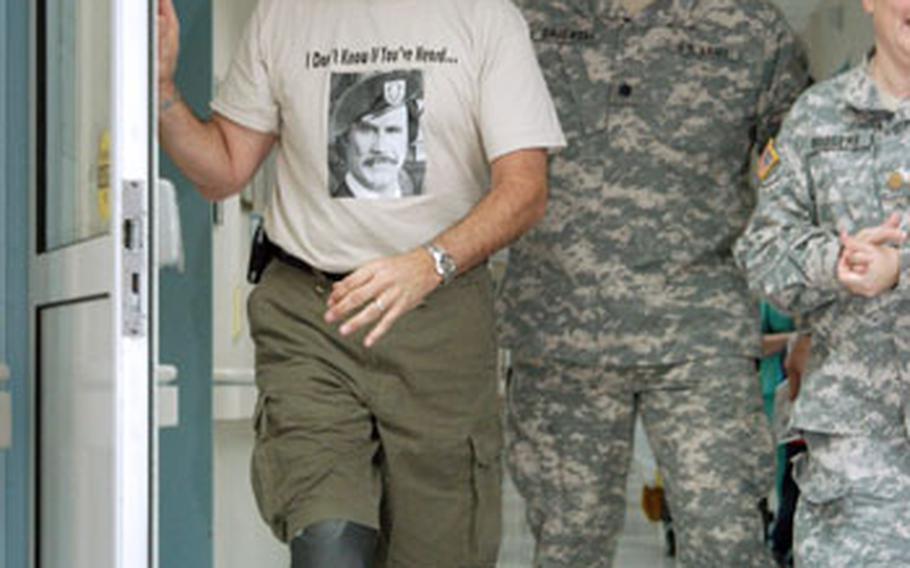 They are filled with shoes.

Smelling of fresh leather, the shoes vary in style and size: a green and black Reebok high top, size 10; a tangerine-colored Converse, size 8; a women&#8217;s white New Balance, size 5; a burgundy and black hand-sewn slipper, no size given.

The bulk of these shoes have no mate because the other is being used by someone who has lost a limb.

"They live in the closet," Army Chaplain (Maj.) Eric R. Meyners said of the shoes, sifting through the bin. "It just doesn&#8217;t seem to be the right thing to do to have them displayed."

"It gets very real," he said. "It brings home for them the harsher side of what goes on in war."

In the chaplain&#8217;s closet, there are dozens of shelves packed with other reminders. Shirts are sliced from collar to waist and fitted with Velcro closures so they can be worn around casts and other cumbersome devices. There are similarly altered boxer shorts, and tear-away pants to be worn over leg braces, and electric razors for soldiers who are unable to use their dominant hand and would cut themselves with a traditional blade.

The shoes may be tucked away in a closet, but medical advances and modern prostheses have brought amputees out into the open more than during any prior war.

Though the total tally of amputees from Iraq and Afghanistan &#8212; more than 900 so far &#8212; is less than one-fifth the tally from Vietnam, troops with missing limbs remain potent symbols of the conflicts, said retired Col. Charles Scoville, chief of amputee care at Walter Reed Army Medical Center in Washington, D.C.

&#8220;Our guys with limb loss are much more visible. They are returning to normal lives,&#8221; Scoville said.

One of them is Joseph Bowser. Now staff assistant to Secretary of the Army John McHugh, Bowser lost his right leg after a 2004 mortar attack in Balad, Iraq.

Then a sergeant first class, Bowser had just finished talking to his children by phone when he walked outside and heard the familiar sound of mortars. He glanced at his watch, thinking that it was about time for the evening&#8217;s attacks to start.

Before he put his arm down, a 122 mm Chinese rocket exploded nearby.

Bowser was bleeding profusely from the back of his right leg. Doctors at Balad stopped the bleeding, but Bowser&#8217;s leg and foot were mangled, his heel bone destroyed. When he reached Walter Reed, Bowser was advised to have his leg amputated.

&#8220;The easy part was saying I want to have it amputated,&#8221; Bowser said. &#8220;The hard part was being pushed out the door and knowing that when you come back you are not going to have a piece of you anymore. There is no way of putting it back on. I was crying like a baby while they pushed me out.&#8221;

During his two-year rehabilitation, Bowser learned to walk again with a prosthetic leg attached below the knee. And after mastering that, he laced up a pair of skates and headed onto an ice rink.

Maj. Marilyn Rodgers, a physical therapist who has worked with amputees at both Walter Reed and Landstuhl, recalls a litany of accomplishments by past patients, including a below-the-knee amputee attempting to qualify for the Olympics in white-water kayaking and a lieutenant colonel leading his unit back to Iraq after losing part of his foot.

&#8220;They are pushing the technology,&#8221; Rodgers said. Prosthetic legs with microprocessors assist with walking and standing, a new prosthetic arm interprets nerve muscle impulses to close or open fingers on a mechanical hand, and stronger and lighter prostheses allow amputees not only to run, but to race.

More than 100 amputees have returned to active duty, about 40 returning to Iraq or Afghanistan, something that would have been unthinkable in the Vietnam War.

Yet no matter how sophisticated the technology, amputees can&#8217;t escape the physical realities of a lost limb. Hence the shoe bin.

The bins were placed in the chaplain&#8217;s closet late in 2005, when the hospital had an influx of soldiers injured by roadside bombs in Iraq, said Army Chaplain (Col.) James Griffith, director of pastoral services at Landstuhl.

Griffith recalled two soldiers looking for shoes; one had had his left leg amputated, and the other had lost his right foot. They both happened to wear the same size.

Griffith also remembered a soldier&#8217;s mother wading into the sneaker bins for her son, taking care not to break up one of the many new pairs that are also available.