Soldiers while away hottest hours in Kuwait by learning Arabic 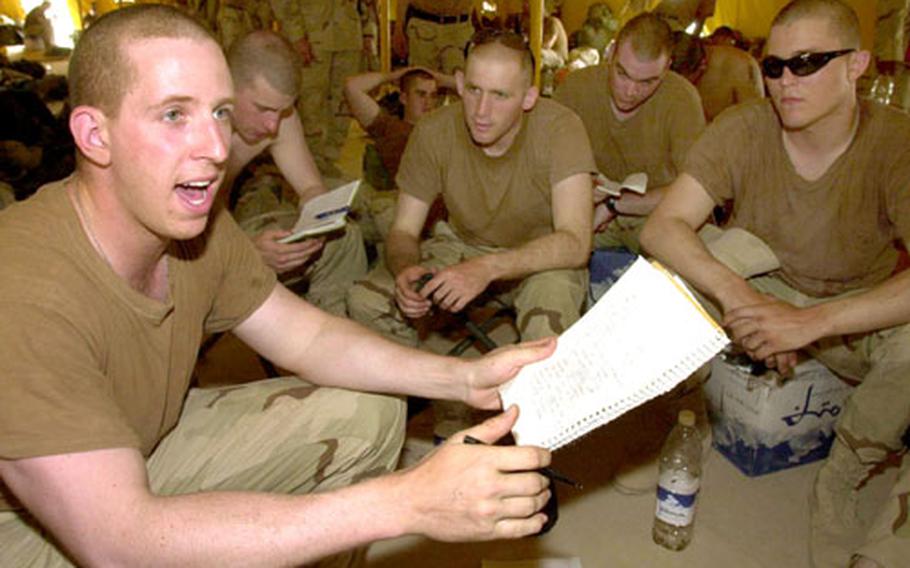 CAMP UDAIRI, Kuwait &#8212; A cluster of infantrymen circled Pfc. Denis Wells, armed with notebooks and pens &#8212; and a desire to learn Arabic.

For members of the 1st Battalion, 36th Infantry Regiment, studying language skills and cultural awareness is a good way to kill time during the hottest part of the day. But the practice may come in handy during the coming months, as they police Iraq&#8217;s postwar lawlessness.

Soldiers near him softly repeated his answer in mumbles.

In the mornings, when the sun is slightly cooler, the soldiers go over tactics. By noon, they retreat into any bit of shade they can find. Under the midday heat, the soldiers&#8217; tent feels like a furnace. Sweat drizzles from their brows.

Flipping through their notebooks, the infantrymen have pages of Arabic words written phonetically.

Wells, a former piano major at Berklee College of Music in Boston, joined the infantry after a neighbor was killed in the Sept. 11, 2001, terrorist attacks.

There are many dialects in Arabic, so the instructors condensed their lessons to the rudiments, such as saying &#8220;Weapon, down.&#8221;

Not all the lessons revolved around searches. The soldiers are learning a few friendly words, too, such as &#8220;Mar-ha-ban,&#8221; which means hello.

The Army also issued soldiers compact discs and pocket-size booklets for them to practice the language.

Each evening, Chaplain (Capt.) Lew Messinger, 34, of Nazareth, Pa., offers classes on the basics of Islam.

Pfc. Rhamane Cisse learned about Islam growing up in Ivory Coast. Six months after leaving Africa for the United States, Cisse joined the infantry. Fellow troops ask him about the religion, he said.

The 1st Armored Division is heading north this week to relieve the 3rd Infantry Division in Baghdad. Soldiers throughout the division&#8217;s 1st Brigade are still in Kuwait, sifting through phonetic pronunciation of one of the world&#8217;s most complex languages. With that, they are learning cultural differences, such as avoiding conversations with women and never using their left hand.

Wells chimed in with an answer.