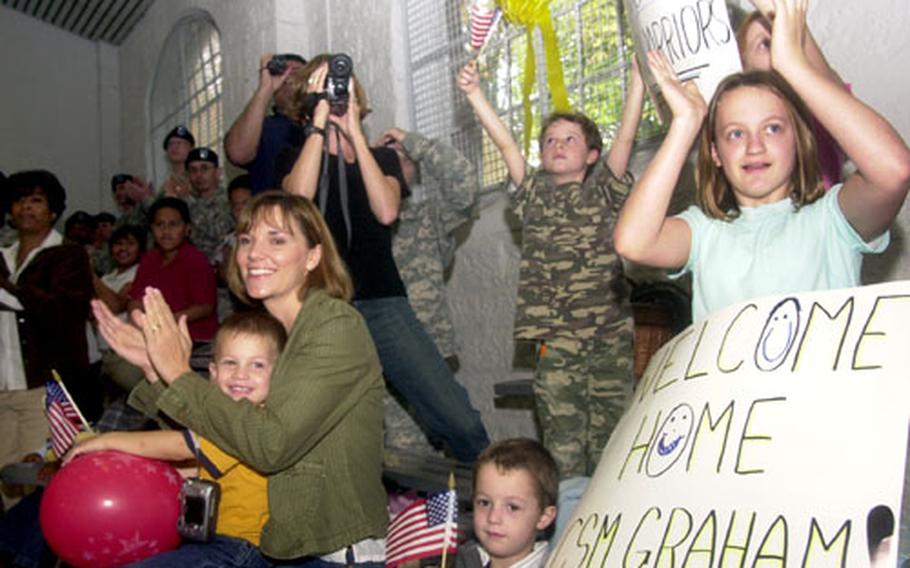 Following a short speech by Lt. Col. Tony Chambers, 181st Transportation Battalion commander, Hunkin&#8217;s children welcomed home their mother after her nearly yearlong deployment to Iraq. The kids, ranging in age from 5 to 9, mobbed their mom with hugs.

Forty-seven soldiers with the 181st Transportation Battalion Headquarters and Headquarters Detachment returned to Mannheim on Wednesday from a 12-month deployment to Iraq. The battalion, which at one point during its deployment was responsible for 1,800 soldiers, operated out of Logistics Support Area Anaconda. During its deployment, the 181st served as a security escort battalion that performed convoy logistics patrols every day, Chambers said.

&#8220;The mission there was definitely one of the most dangerous missions a unit could undertake being in Iraq,&#8221; he said.

That being said, all the soldiers from the Mannheim-based unit made it back safely, Chambers said. Chambers referred to his soldiers as heroes who set and maintained a high standard throughout their deployment.

Now that Hunkin, a veteran of three deployments, is home, her husband, Lepapa, said he will turn over the couple&#8217;s four kids to her.