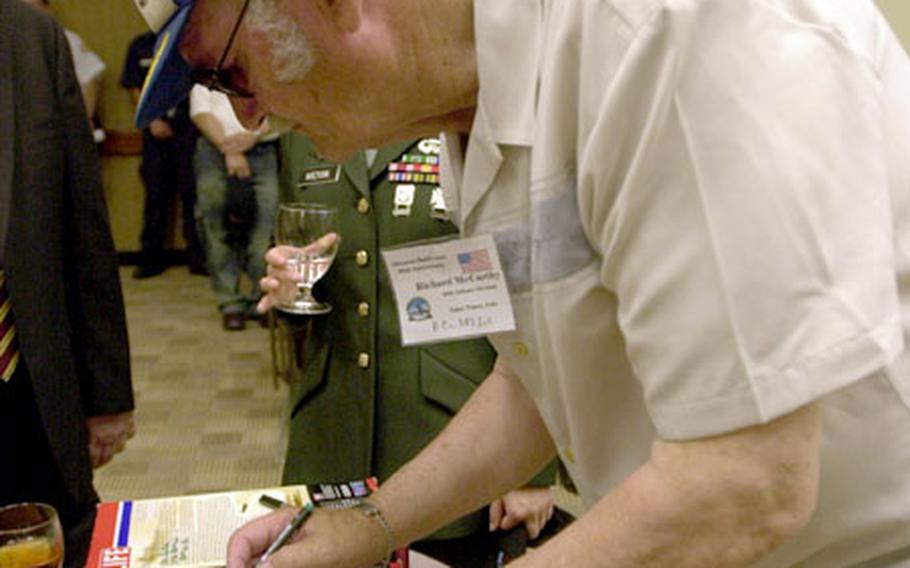 TORII STATION, Okinawa &#8212; The Army held several events Wednesday afternoon to commemorate the 60th anniversary of the Battle of Okinawa.

Several members of the Army&#8217;s 96th Infantry who fought here attended the events, which included viewing battle memorabilia, a devotional at the base chapel, a weapons and gear display and a &#8220;retreat&#8221; ceremony. A special part of the day for the former fighting men was the dedication of Torii Station&#8217;s Training Center to Pfc. Edward J. Moskala, who earned the Medal of Honor during the battle.

Moskala, of Company C, 383rd Infantry, 96th Infantry Division, was fighting at Kakazu Ridge on Okinawa. According to the medal citation, he took out two machine-gun nests, then with seven other men provided security as the unit withdrew.

Three hours later, he realized a wounded soldier was left behind and returned for him. He then protected other wounded soldiers and saved another man while killing four enemy infiltrators. Moskala was struck and mortally wounded while aiding a disabled soldier.

After the dedication, the former warriors entered the training center to view static displays of U.S. and Japanese World War II military items.

While viewing the displays, Richard McCarthy said he remembers the battle well. He was an 18-year-old private first class replacement with Company B, 383rd Infantry, when he landed on Okinawa April 12 or April 13.

He said he was wounded twice: once by a bullet in the leg and again by grenade shrapnel in the left shoulder. He was shot on &#8220;Charlie Hill,&#8221; he said, after he was sent forward to demolish an enemy position.

&#8220;After I threw the satchel charge into the cave, I turned around and noticed I was by myself,&#8221; said McCarthy, who this month was making his fourth trip back to the island since the battle. He said some men behind him had been hit by machine-gun fire and were &#8220;hunkered down&#8221; in holes. He joined them and was hit in the leg after a bullet ripped through the right hip and buttock of a soldier in front of him.

It took McCarthy half a century to learn that soldier&#8217;s identity. While at a reunion in 2000, he was talking to former unit member Jim Reineck, whom he didn&#8217;t know. The man said he was shot on the same day as McCarthy, on the same hill. McCarthy said he asked Reineck if he&#8217;d been shot through the buttocks. The answer was yes.

While veterans recalled the battle, collectors such as Marine Staff Sgt. Richard Deuto helped them view some of the gear they once used. Deuto said he has been collecting war memorabilia for years and loves to show it off to the veterans and hear their war stories.