Soldiers use training to reaffirm their skills on the big guns 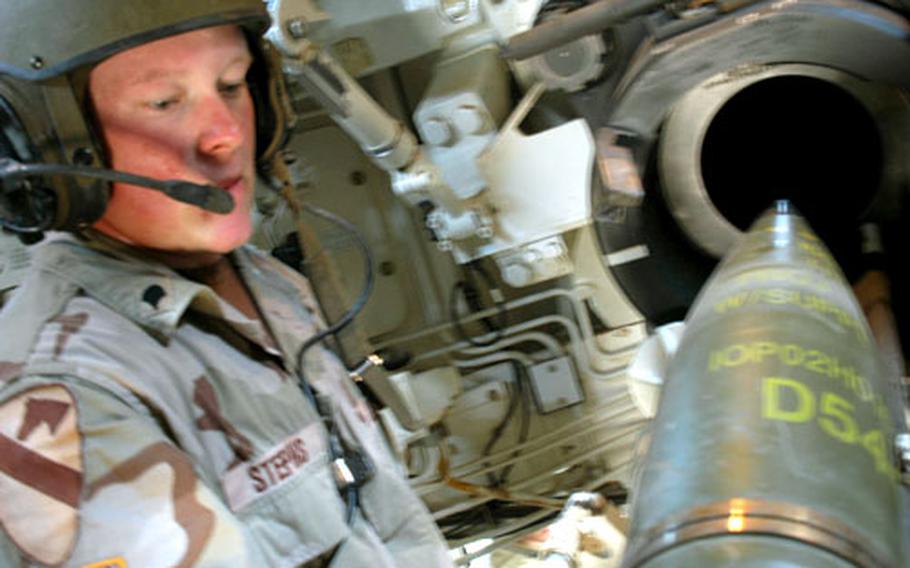 Spc. David Stephens, 21, of Miskeego, Wis., loads ammunition into the barrel of a M109 Alpha 6 Howitzer during a qualification test Friday at Camp Tigerland in Baghdad. Each chief of each four-man crew must qualify every six months in order to operate the gun. Stephens is the “No. 1 man,” the soldier responsible for loading the weapon. (Teri Weaver / S&S)

CAMP TIGERLAND, Iraq &#8212; One morning last week, during their off hours, four soldiers from the Wisconsin National Guard volunteered to work in a Howitzer with no air conditioning. The crew signed up to train for certification to fire the big guns in Iraq, a once-every-six-months requirement for artillery units here. The soldiers must certify, and recertify, to ensure proper proficiency and safety goals are met, said Maj. Bryan Gardner, 37, of Ponchatoula, La.

For every four-man gun crew, a certified chief must be inside the Paladin to oversee the firing of each round.

The Milwaukee soldiers are attached to a Louisiana National Guard unit, the New Orleans-based 141st Artillery, Gardner said. The 141st has a number of Howitzers poised on the edge of this part of Camp Liberty to target specific areas as needed, he said.

The soldiers who man the guns feed a mix of information &#8212; target and gun locations, weather conditions, direct observation &#8212; into the gun&#8217;s computer to determine the amount of propellant needed for each fire, Gardner said.

To pass the qualification, the team had to fire a series of 155 mm rounds at a target more than 1,000 meters away. If they were more than 50 meters off, they failed. If they attempted to hit a target at a certain time, and failed by more than two seconds outside of that time, they failed, Gardner said.

For those who have qualified, manning the Howitzer involves being ready to go at a moment&#8217;s notice and to accurately shoot off a round every 15 seconds, Gardner said.

But the crews on duty don&#8217;t have to spend their entire shift inside the gun. Instead, they wait in a nearby room complete with ice chests, a television, a couple of cots and air conditioning.