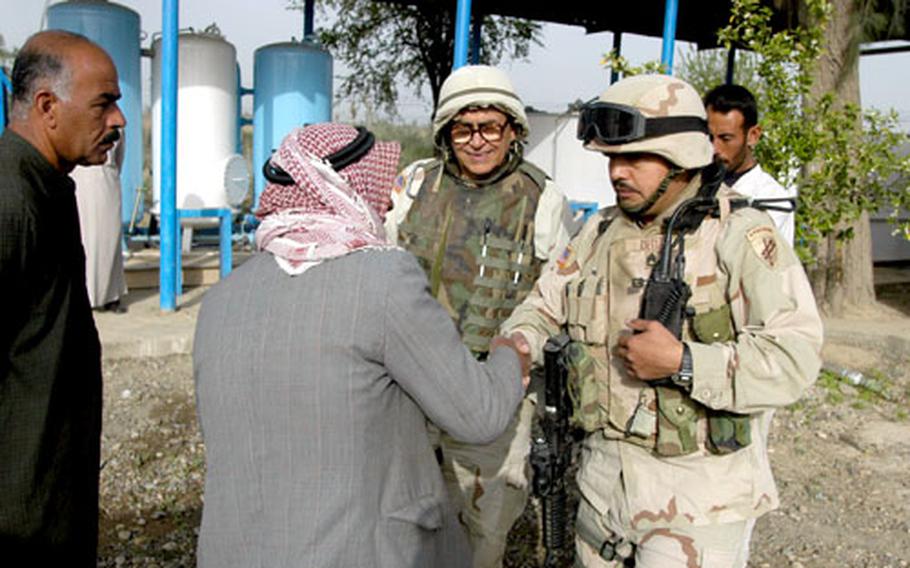 Staff Sgt. Rene Ortiz, right, of the 426th Civil Affairs Battalion, shakes hands with a local official in Bichigan, Iraq, after inspecting the filtration system, background, of a water system to be used by the small village. (Charlie Coon / S&S)

Staff Sgt. Rene Ortiz, right, of the 426th Civil Affairs Battalion, shakes hands with a local official in Bichigan, Iraq, after inspecting the filtration system, background, of a water system to be used by the small village. (Charlie Coon / S&S) 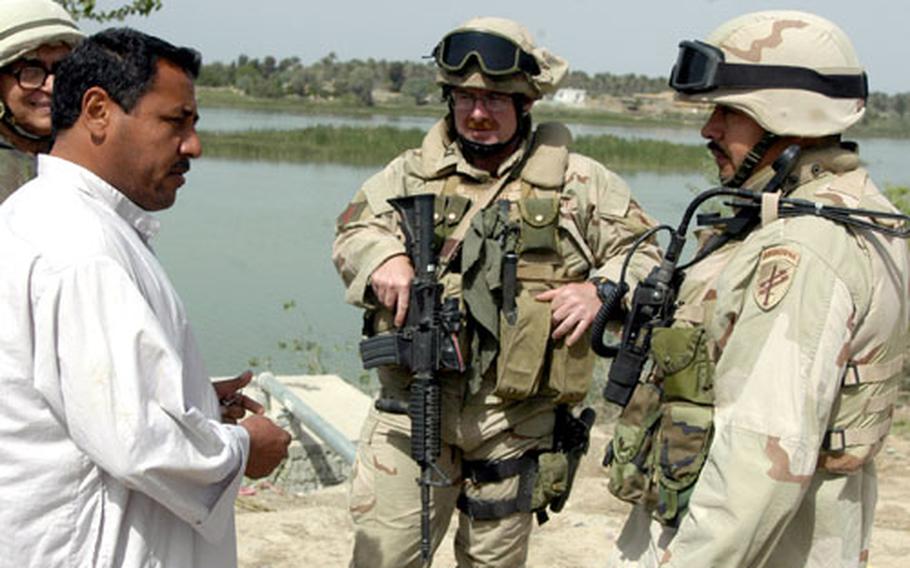 Capt. Andy McConnell, center, and Staff Sgt. Rene Ortiz, right, consult with an Iraqi contractor on a project that would bring water from the Tigris River, background, into the village of Bichigan, Iraq. (Charlie Coon / S&S) 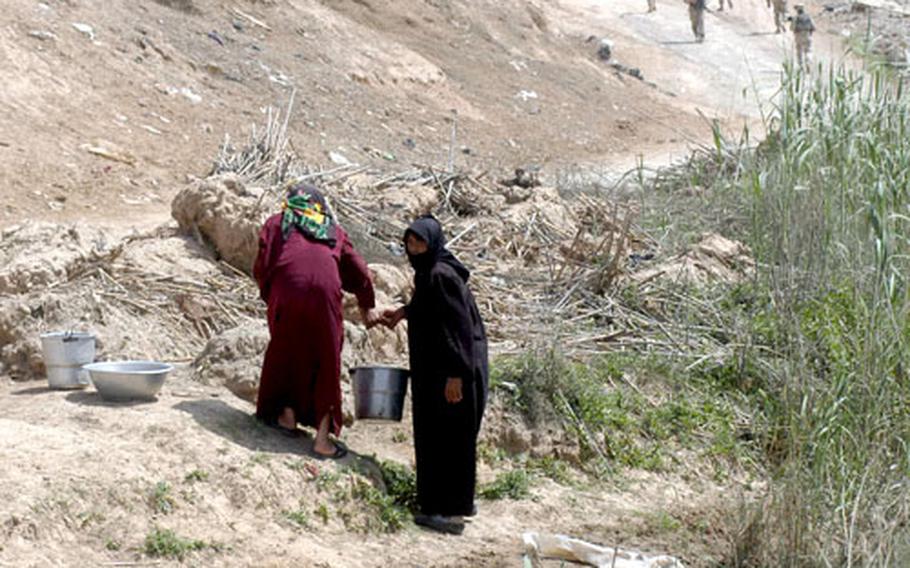 Women from the village of Al-Mashru, Iraq, collect water from an irrigation canal near their home on April 4. (Charlie Coon / S&S)

For many Iraqis who live in rural villages, having enough water to get by has always been good enough.

Part of the U.S. military&#8217;s goal is to change that way of thinking. If more Iraqis had clean water to use, there&#8217;d be less hepatitis and gastrointestinal disorders such as diarrhea. So the military is working with local contractors in north-central Iraq to build water-cleaning facilities at villages along the Tigris River such as Hardania and Bichigan.

&#8220;Adequately chlorinated and treated water can effectively eliminate those (ailments), especially in children and the elderly, people with weak immune systems,&#8221; Tarpey said.

The process is simple enough.

Water is pumped from the Tigris River into a tank.

Alum, a type of metal, is added to the tank and binds with the heavier compounds in the water, such as dirt. The solids sink to the bottom of the tank.

The less-dirty water is filtered several more times, then chlorine is added and the water is pumped into the nearby village.

If the water facility works as it is designed, then the village of Hardania, population 250, will have clean water for years to come.

But the soldiers worry that the system will not be maintained after it is built. They don&#8217;t trust the local &#8220;water guy&#8221; to add alum and chlorine and regular intervals.

Nor are the soldiers sure that there will be fuel for the generators that are used to power the pumps.

&#8220;They have problems getting fuel for the generators,&#8221; said Capt. Andrew Staples of Headquarters Company, 1st Battalion, 15th Infantry Regiment. &#8220;The fuel trucks that come out of Tikrit stop and sell their fuel on the black market. Once the fuel gets here to the local level, it&#8217;s expensive.&#8221;

Last week&#8217;s trip was at least the fifth to the water facility, whose contractor has had a hard time living up to the terms of the contract. Staples said last Monday it appeared the work was finally wrapping up and the battalion would likely make its final payment to the contractor.

Contractors gamble when they work for American money, according to Kasim Ballil, an engineer who has secured several jobs.

Ballil said that the tide was turning in his community in the favor of the U.S. military and the fledgling Iraqi government.

&#8220;We are afraid of the bad guys. When the bad guys are gone, then you can come back here without your guns. I think we need one more year, maybe less than one year.&#8221;