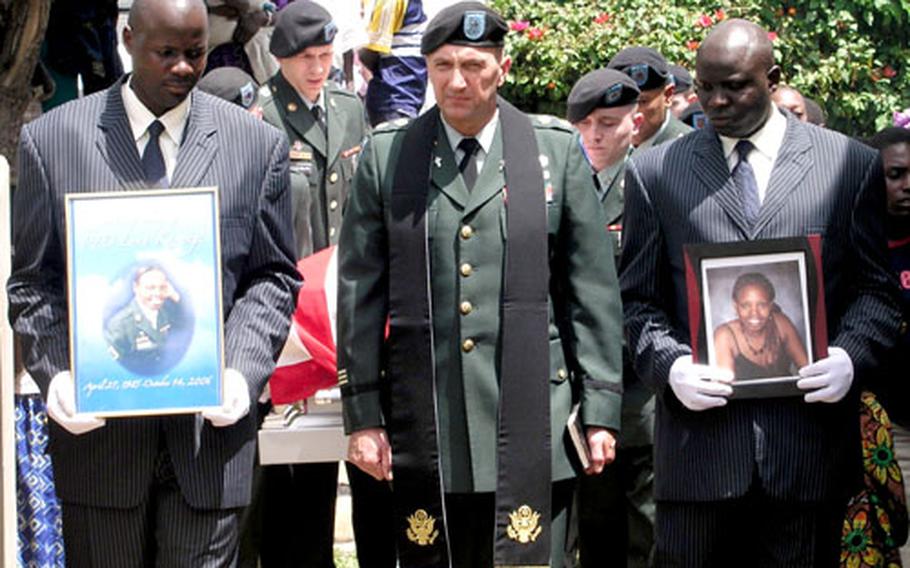 Army Chaplain (Maj.) Mark Nordstrom leads the funeral procession for Pfc. Lena Karungi, in Mbarara, Uganda on Nov. 12. Holding the photo of the V Corps soldier, who was killed in a train accident near Heidelberg in October, is a worker for the local funeral service. (Shane Eschenburg / Courtesy of U.S. Army)

Army Chaplain (Maj.) Mark Nordstrom leads the funeral procession for Pfc. Lena Karungi, in Mbarara, Uganda on Nov. 12. Holding the photo of the V Corps soldier, who was killed in a train accident near Heidelberg in October, is a worker for the local funeral service. (Shane Eschenburg / Courtesy of U.S. Army) HEIDELBERG, Germany &#8212; She had traveled many miles in her short life.

She had lived on three continents, known several languages, become a soldier and an American citizen. But after she died, her father wanted her remains taken home to her birthplace.

In November, Pfc. Lena Karungi &#8212; accompanied by 10 V Corps soldiers and a U.S. Army Europe chaplain &#8212; was buried with military honors on a farm in Uganda.

Six solemn soldiers in dress uniforms carried her coffin draped with a U.S. flag across the field as upward of 1,000 Ugandans &#8212; relatives and friends, young men carting AK-47s, and people who came &#8220;right out of the jungle, laying down their bundles&#8221; looked on, said Chaplain (Maj.) Mark Nordstrom, chaplain on the trip.

It was one of the more unusual versions of the ceremony that is every soldier&#8217;s and most veterans&#8217; right: that after death they be accorded military funeral honors.

&#8220;The rendering of Military Funeral Honors is a way to show the nation&#8217;s deep gratitude to those who, in times of war and peace, have faithfully defended our country,&#8221; according to a Defense Department Web site.

Karungi&#8217;s funeral detail was composed of six pallbearers, a bugler, a chaplain and three others. Most were volunteers, according to Spc. Shane Eschenberg, both pallbearer and Army journalist for the event. He practiced for two weeks before making the six-day trip from Germany to Uganda that started Nov. 10.

Karungi was killed the night of Oct. 14, along with Spc. Latosha Vines, when, needing to go the bathroom, they ducked behind bushes on the railroad tracks outside a train station east of Heidelberg and were hit by a train.

Karungi was a legal clerk and had been with V Corps 15 months. She and her father moved from Uganda to Boston when she was a teen, and she became a U.S. citizen this summer.

She was among the growing number of immigrant-soldiers who become U.S. citizens: from 750 in 2001, according to the Defense Department, to almost 4,600 last year.

In addition, some 30,000 noncitizens serve in the U.S. armed forces, or about 2 percent of the active-duty force, according to statistics from the military and the Council on Foreign Relations. About 100 noncitizens have been killed in Iraq and Afghanistan, according to the International Herald Tribune.

How many of them received military funeral honors is unknown, as is the number of countries soldiers had visited to perform them.

The Uganda detail was a big effort, involving coordination with the U.S. Embassy in Uganda, as well as working with Karungi&#8217;s family.

The detail was not inexpensive. Nordstrom&#8217;s reimbursable temporary duty cost was a little less than $3,000, he said, including commercial airfare and lodging.

But after they got there, all was well.

The group was ferried in vans with trained embassy drivers on pot-holed roads from Entebbe to Kampala City to Mbarara. They performed military honors several times, including at a house, where they arrived near midnight and the mourners stayed up all night, and, the next morning, at a church.

Nordstrom said he has been involved in some 200 funerals with military honors, and that reaching out to the families and representing and honoring the soldier is always the same, whatever cultural or language barrier.

But in Africa, amid a crush of 1,000 mourners, he felt something more.

Since 2000, federal law has mandated that the Defense Department provide military funeral honors for whoever is eligible and whose family requests it.

The detail for the funeral must consist of at least two military members in uniform, and, at minimum include the folding and presentation of a U.S. flag and the playing of taps, preferably by a bugler, but from a recording if a bugler is not available.

The law was passed after concern that the increasing number of veterans&#8217; deaths as the population aged, coupled with a decreasing number of military members as the forces drew down, could mean that some veterans were not being accorded such honors because of lack of manpower. There was also concern that military honors were not standardized.

If more families knew about the benefit, the report said, it was expected that 45 percent of families would request it.

Veterans who received an other than dishonorable discharge are eligible for the benefit, as are all military members currently serving.