Soldiers training for Iraq by kicking down doors in Baumholder 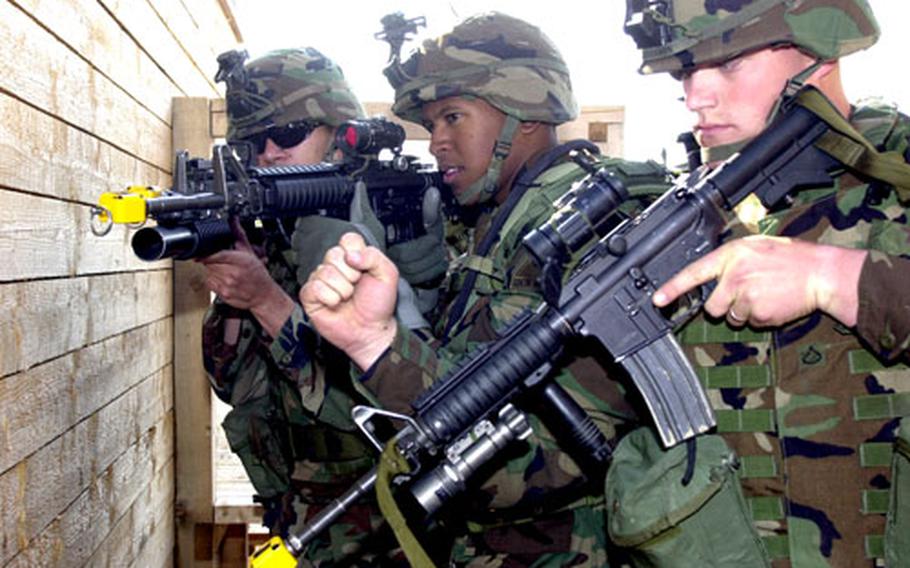 Pfc. Matthew Erickson, 22, from Othello, Wash., and Company B of the 2nd Battalion, 6th Infantry Regiment, prepares to break open the door to Baumholder’s new shoot house during a demonstration Friday. Ready to go in with Erickson are Spc. Willis Sanft, 18, from Waco, Texas, center, and Spc. Jesse Roderiguez, 24, from Chicago, Ill. They are members of the same unit. (Terry Boyd / S&S)

Pfc. Matthew Erickson, 22, from Othello, Wash., and Company B of the 2nd Battalion, 6th Infantry Regiment, prepares to break open the door to Baumholder’s new shoot house during a demonstration Friday. Ready to go in with Erickson are Spc. Willis Sanft, 18, from Waco, Texas, center, and Spc. Jesse Roderiguez, 24, from Chicago, Ill. They are members of the same unit. (Terry Boyd / S&S) 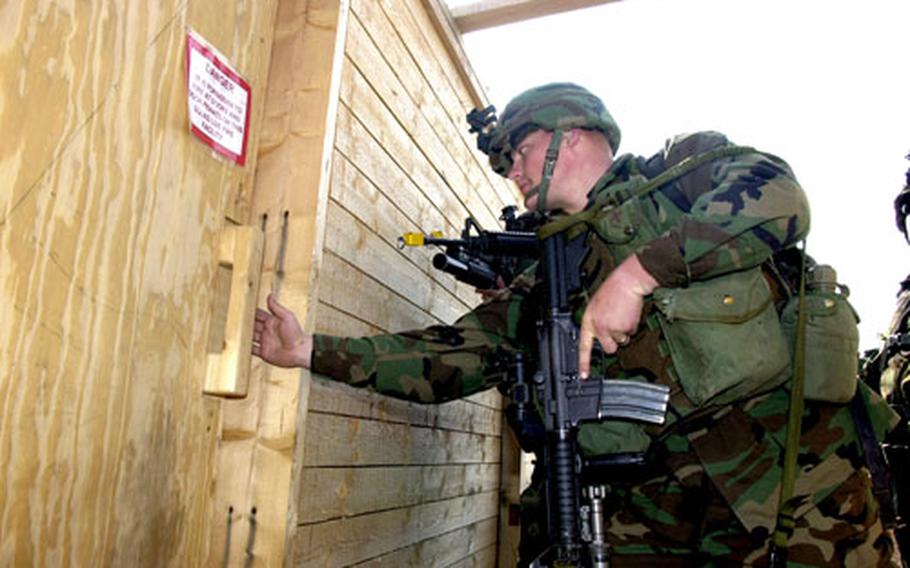 Erickson checks the door prior to going through it. (Terry Boyd / S&S) 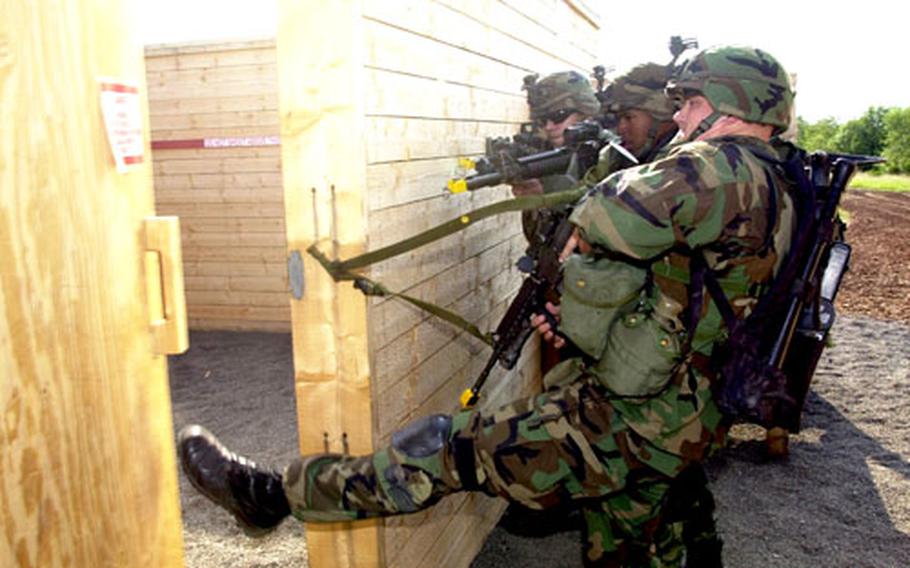 Erickson boots open the door and his team prepares to rush in. (Terry Boyd / S&S)

BAUMHOLDER, Germany &#8212; Before big missions in Iraq or Afghanistan, it&#8217;s not unusual to see bands of soldiers with M-4s raised, walking slowly and purposefully through small mazes of plywood sheets simulating &#8220;rooms,&#8221; counting off steps like dancers rehearsing a complicated routine.

That&#8217;s one way to rehearse clearing a building.

A better way is shooting your way through real ones using live ammunition. After all, nothing says &#8220;I trust you&#8221; like working with team members firing weapons a few inches away.

The Range 21 Shoot House at Baumholder is the newest firing house &#8212; and only the second in Europe &#8212; that allows soldiers to practice clearing buildings using live ammunition. The range opened Friday after a brief ribbon-cutting ceremony with Baumholder and 7th Army Training Command officials, then a demonstration by 2-6 soldiers without live ammunition.

At one point in the 1st AD&#8217;s April 2004 campaign against Muqtada al-Sadr&#8217;s Mahdi Army, his unit cleared 200 buildings at night in a 12-hour period, Cotto said. Incredibly dangerous and demanding, it was physically and mentally draining work, he said.

To hone their skills, soldiers took bombed-out buildings on the Butler Range, east of Baghdad, and started using them for live-fire training. Master Sgt. Alec Lazore, formerly the brigade master gunner, came up with the design, which cost about $7,000 to build, Richardson said.

To the untrained eye, the new Baumholder complex doesn&#8217;t look like much. It&#8217;s a series of small, crude, roofless buildings with 7-foot-high walls. But the walls are steel &#8212; representing most of the construction cost &#8212; which absorbs the rounds, lined inside by easily replaceable wooden two-by-fours.

Building designs give soldiers a lot of different looks, Richardson said. Soldiers enter one building and see multiple doors right off the bat. Enter another, and there&#8217;s one way in, one way out. Depending on the building, halls are short, halls are long. There are single-room and multi-room setups inhabited by target silhouettes that can be positioned anywhere.

The shoot house is close to other training facilities, including Baumholder&#8217;s Close Quarters Battle range and Military Operations on Urbanized Terrain ranges. But soldier after soldier talked about how the shoot house is as realistic as it gets.

The surrounding open ground can be integrated into all sorts of scenarios, such as a patrol taking small-arms fire from a compound, pulling up to it, securing the perimeter and then clearing the buildings, Richardson said.

Cott said he&#8217;d like to see more obstacles inside each building: sofas and refrigerators to negotiate, and closets for suspects to hide in, just like Iraq.

Training officials are trying to scavenge old furniture that the housing office is about to pitch, Larroy said, to make things as realistic as possible.

So now, for 1st AD soldiers, staying alive in Iraq will start with a noisy day in Germany&#8217;s shoot house.

Little time to think with lives on the line

BAUMHOLDER, Germany &#8212; A four-man stack lines up against the wall of an Iraqi house.

Is the door locked?

The team leader checks it, then silently signals it is.

All four rush in, each with a section of the room to secure. Each must chose the path of least resistance to his &#8220;point of domination,&#8221; said Sgt. 1st Class Cameron Richardson, master gunner for the the 1st Armored Division&#8217;s Baumholder-based 2nd Brigade.

Each team member relies on the others to do his job. If one fails, they all die.

Information starts flying. The number of people. Dead. Wounded. The layout. Long hallways with lots of rooms; short hallways to one room. There are endless distractions.

As other squads clear nearby buildings, there may be shooting all around. A Squad Automatic Weapon gunner or a M-240B gunner may be firing support from a position outside the building, Richardson said.

Brunick is the squad leader who gave a brief building-clearing demonstration at Friday&#8217;s ribbon-cutting for Baumholder&#8217;s new live-fire shoot house. But he has done the real thing, learning the trade in Iraq.

The shoot house helps build confidence and trust for a task that calls for total mutual reliance, he said. In training scenarios, teams switch up positions and learn one another&#8217;s jobs. But clearing buildings in urban warfare puts great pressure on the team leader, who controls the inside of the building, and the squad leader, who decides how and when teams will move next, and which door they&#8217;ll open next, Brunick said.