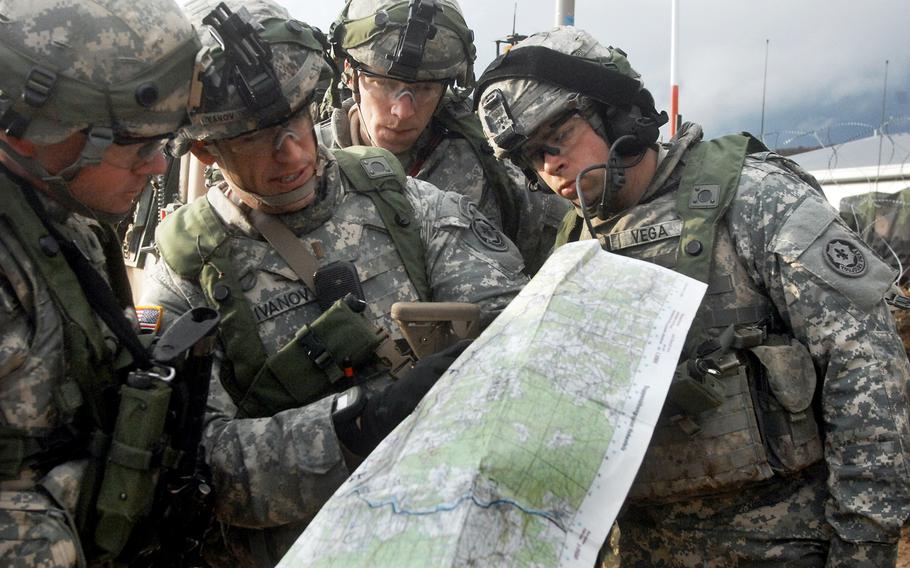 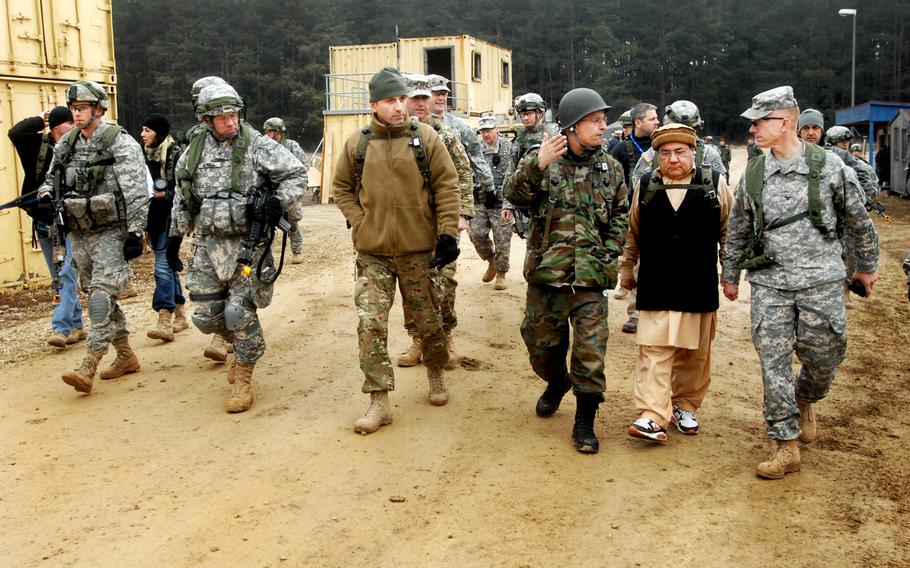 Col. Douglas A. Sims, right, commander of the 2nd Cavalry Regiment, walks with role-players acting as an Afghan government official and an interpreter during the unit's pre-deployment exercise in Hohenfels, Germany, in March. (Steven Beardsley/Stars and Stripes) Col. Douglas A. Sims, right, commander of the 2nd Cavalry Regiment, speaks with a role-player acting as an Afghan government official during the unit's pre-deployment exercise in Hohenfels, Germany, in March. The three-week training sought to simulate conditions in the area of southern Afghanistan where 2nd Cavalry is scheduled to deploy this summer. (Steven Beardsley/Stars and Stripes) 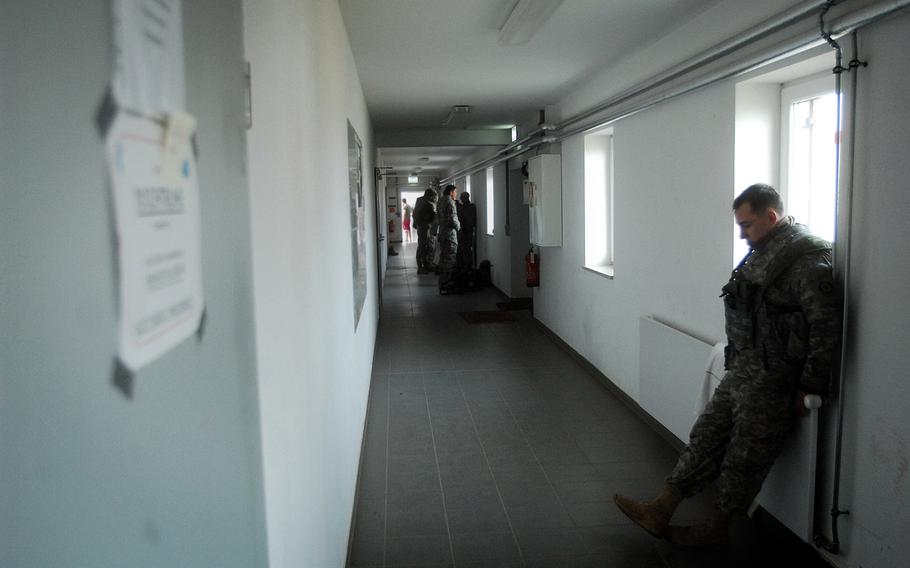 Pvt. Mike Forgach of Troop L waits in a hallway before role-playing resumes during the 2nd Cavalry Regiment's pre-deployment exercise in Hohenfels, Germany, in March. (Steven Beardsley/Stars and Stripes) 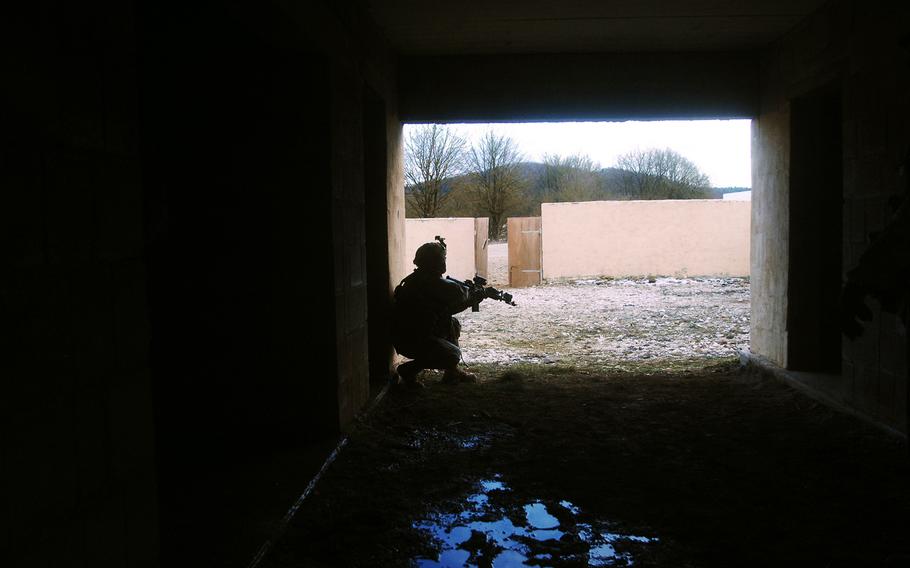 A soldier with 2nd Platoon, Troop L, surveys his surroundings during the 2nd Cavalry Regiment's pre-deployment exercise in March in Hohenfels, Germany. (Steven Beardsley/Stars and Stripes)

VILSECK, Germany -- On a recent tour of the piece of southern Afghanistan that his squadron will inherit when it deploys this summer, Lt. Col. Eric Smith surveyed the remnants of past efforts against Taliban insurgents, from abandoned outposts to faded roads and former phase lines.

An enthusiast for military history who once gave tours of the Gettysburg battlefield in college, Smith saw parallels between past and present.

“It reminded me of Gettysburg,” he recalled.

Then the present intruded. Smith’s armored vehicle struck a roadside bomb, which destroyed it and left its occupants shaken but uninjured.

The close call underlines the continued stakes in Afghanistan as Smith’s squadron and its parent unit, the 2nd Cavalry Regiment, prepare to make one of the Army’s final combat deployments to Kandahar province before coalition combat forces withdraw in 2014. Even as Americans close the books on more than a decade of war in Afghanistan, the conflict continues.

The face of those fighting it is changing, however, and for the past five months, the regiment has trained for a tour that looks little like the ones before it. As Afghan forces take the operational lead for security across the south, 2nd Cavalry will be asked to stand aside in a secondary role.

“We’re all back-chair guys now,” said Col. Douglas A. Sims, the regimental commander. “Decisions and actions are being made by Afghans.”

That’s a shift from the counterinsurgency tactics of recent years. Soldiers will make fewer patrols to local villages, and instead of living on far-flung combat outposts with Afghan soldiers, they’ll consolidate on larger bases, where interactions with Afghans will be limited — and guarded.

Focus will turn to protecting military adviser teams embedded in most squadrons and tasked with improving Afghan command at the battalion level and above. Some soldiers will help pack out former American bases being closed or turned over to Afghans.

“We’ve explained it to them, that this part of the operation is not what it used to be,” 1st Sgt. Benny Salas, of Lightning Troop, 3rd Squadron, said of his men.

Squadron commanders like Smith will oversee areas last occupied by full brigades, units at least five times larger, making them reliant on Afghan forces to fill the space. They’ll continue to curtail much of the assistance they offered in years past, from funding to equipment.

It’s a far different focus from the regiment’s 2010 deployment to southern Afghanistan, when units fought to push insurgents outside population centers such as Kandahar City and sought support from the residents inside. They funded local projects and patrolled villages to plumb residents for intelligence, and they also eagerly provided much of the equipment and support for Afghan forces, recalled Sims, who commanded 1st Squadron at the time.

“In the past, we would go out and execute operations with the police and army, and, as part of that, we’d end up filling up their trucks,” said Sims, who commanded 1st Squadron at the time.

After returning to Vilseck in 2011, the regiment spent much of the next 1½ years “resetting” — sending soldiers to other units and receiving replacements — and preparing for a major armor exercise in late 2012.

In January, Sims returned to command the regiment, where he was soon joined by new commanders in five of the unit’s six squadrons.

Original plans called for less than a third of the regiment to deploy, a typical reduction for an advising mission. When the Army raised the number to about three-quarters of the regiment several months ago, commanders scrambled for more bodies.

They pulled units out of rear detachment and tapped staff officers to lead adviser teams. By the time the regiment began block-leave at the end of May, some units were still awaiting the arrival of advisers.

A three-week pre-deployment exercise in March offered a kind of dress rehearsal for the tour. Units convoyed between bases, fought skirmishes with insurgents and even held mock memorial ceremonies for fallen soldiers.

Commanders attended scripted meetings with role-players acting as Afghan officials, where they practiced relaying the urgency of the approaching U.S. withdrawal. In one scenario, Sims leaned in as the provincial governor rattled off a list of problems, from a new Taliban safe house in Daman village to the inability to find fuel or vehicle parts. He encouraged them to find their own solutions.

“As you know, we will not be here in a year,” Sims told the provincial governor. “When we leave, will Daman be able to stand on its own, or will it fall apart?”

Kandahar is high-stakes ground in Afghanistan. Considered the birthplace of the Taliban movement, it includes the districts of Zhari, Panjwai and Maiwand, which together accounted for 12 percent of all enemy attacks during the 2012 fighting season, according to the Department of Defense. The area is off to a volatile start in 2013: A popular uprising against the Taliban in Panjwai was cheered earlier this year, but the annual fighting season began with roadside bombings in Maiwand and Zhari that killed a combined eight U.S. soldiers earlier this month.

Taliban fighters have lost territory in recent years and appear reluctant to challenge coalition forces directly, observers say. Many believe fighters will wait for coalition withdrawal in 2014 before resuming any kind of ground campaign.

Recent attacks have taken the form of roadside bombs; “insider” attacks, in which a member of Afghan forces attacks coalition members or other Afghan forces; and the occasional high-profile attack.

Afghan forces have endured the largest toll as they’ve moved into the lead, with mounting casualties.

A challenge for 2nd Cavalry commanders will be figuring out if, when and how they’ll fill in security gaps left by the Afghans and the extent to which they’ll support Afghan forces under fire.

Sims believes that even with the continued American presence, Afghans have an incentive to act on their own, given the coming withdrawal in 2014. But some units will still need support outside of advisement, he said, and they’ll receive it. And American soldiers will not sit by if Afghan positions are being overrun, he said.

“We’re still there to make sure that they don’t fail,” he said.