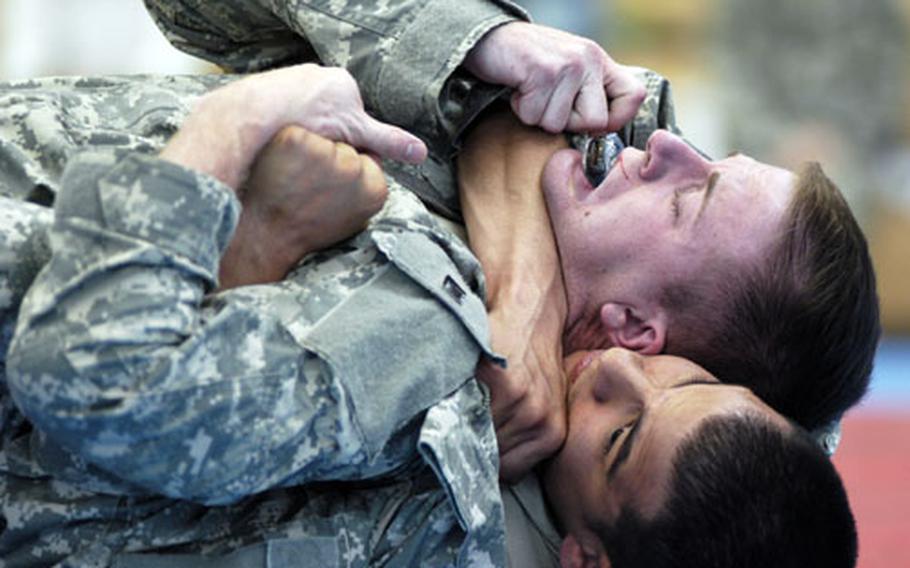 WIESBADEN, Germany &#8212; More than 200 fans filled the airfield fitness center Tuesday to watch some of the toughest soldiers in Europe during the "Rumble on the Airfield" combatives tournament.

The tournament, hosted by the 2nd Military Intelligence Battalion, was the first of its type at the airfield.

The mission of the U.S. Army Combatives is to train soldiers to defeat enemies in hand-to-hand combat.

The Army Modern Combatives Program has seen a steady rise in interest since it became part of Army doctrine in 2002. And while the sport of combatives is relatively new, organizers and fans are seeking out ways to make it more visible throughout Europe. U.S. Army Europe has started adapting combatives into its programs, including the Noncommissioned Officer of the Year and Soldier of the Year boards.

It is also being offered as an option for many soldiers attending some Army schools throughout Europe.

The competition started at 10 a.m. for the 21 competitors.

During preliminary rounds, soldiers work on trying to get their opponents to submit, or "give up." This round is Brazilian jiujitsu-based, explained Sgt. 1st Class Matthew M. Bishop, a master combatives trainer with the 307th Military Intelligence Battalion, who traveled from the United Kingdom to help with the tournament.

For Tuesday&#8217;s matches, there was no time limit for the bouts.

"Bouts were decided by tap-out or pass-out," said 1st Sgt. Matthew D. Rutter, Company B, 1st Military Intelligence Battalion. Rutter explained the bouts were stopped either by submission or referee stoppage. The organizers said they avoided setting up a point system because they wanted to create combat realism.

The fighters were allowed more freedom as the competition wore on: In the finals, for instance, open-hand slaps to the face and closed-fist strikes to the body are permitted.

Spc. Kristin Mahan of the 212th Military Police Company was the only woman to take part in Tuesday&#8217;s competition.

Although she was pitted against two male competitors in the welterweight division, she said she was not intimidated. While many fighters try to be aggressive, Mahan said she tries to use defensive strategy by using more leg power as opposed to upper-body strength.

Mahan lost both of her bouts, but said she would take part in future competitions.

"The only training I ever had on this is what I got in basic training," said Mahan, who is not officially certified in Army combatives. "At first I was really intimidated by [not being certified], but then I said, &#8216;You know what, just fight and have fun.&#8217; "

Fans were on their feet as Sirk and Adamson traded body punches and hand-slaps. In the end, a victorious Sirk pounded his chest and let out a roar.

"It was a great fight and a lot of fun to be here," said Sirk, who plans on getting out of the Army in four weeks. He said he wants to take the experience he has learned through combatives and apply it to his next career as a cage fighter.

In the final battle of the night, Spc. Josh Locke outfought Spc. Cody Martin, both with the 501st Military Police Company, to win the heavyweight title.

As he caught his breath from the competition, a smile came to Sirk&#8217;s face: The champions were given congratulations by some of the best hand-to-hand fighters in the world. Dan Hardy, Jon Fitch, Mike Swick and Edith Labelle from the Ultimate Fighting Championship were on hand for the finals.

Fitch, who is ranked as high as second in the world, said he was humbled by the chance to visit soldiers and their families. He said he was touched to learn that UFC fighting is popular with so many soldiers, but was not surprised. "You have four corners, guys playing basketball in one, guys playing football in another, guys playing soccer or something in the other, in the fourth corner a fight breaks out, everybody else is on top of the building watching," said Fitch.

As the UFC fighters wrapped up their autograph sessions, fans and participants could be heard rushing to the organizers of Tuesday&#8217;s event asking when the next tournament was taking place.

Bishop urged soldiers or leadership interested in more information about combatives or arranging classes for their unit to contact him at: matthew.bishop@us.army.mil.