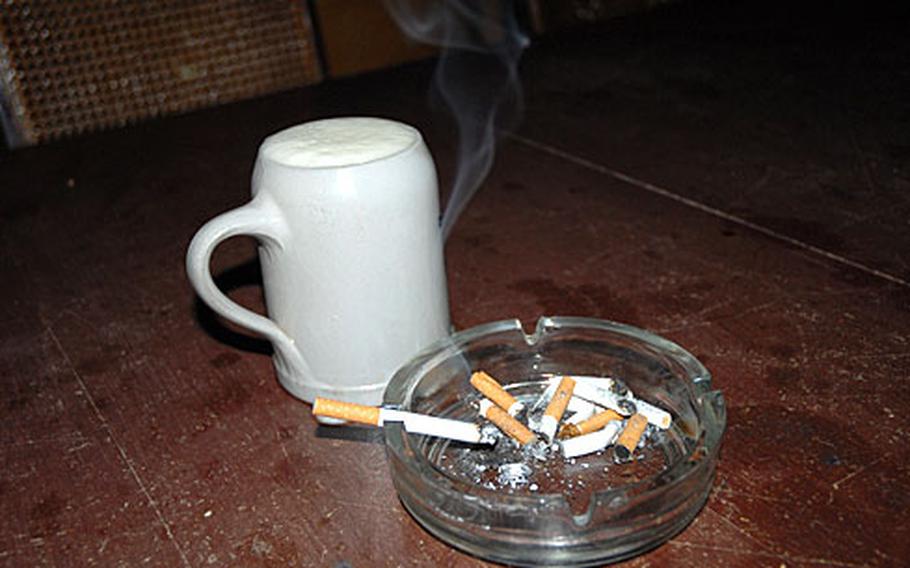 BAMBERG, Germany &#8212; The cobblestones outside the entrance to the Green Goose seem almost paved with cigarette butts.

At 2 a.m. on Saturday, more than a dozen people stood near the door of the club in small circles or alone, chatting or quietly puffing away.

About a week ago, GI and German smokers were happily dragging inside, but like other Bavarian clubs, bars and restaurants, the Goose went smoke-free at the stroke of midnight Dec. 31.

Some clubs, such as Bamberg&#8217;s Sound &#8217;n Arts, are making themselves members-only, with a membership that embraces nicotine.

New members can sign up at the door and smoke to their heart&#8217;s content for a nominal fee.

For several young smokers at Bamberg&#8217;s Warner Barracks, the ban won&#8217;t change their daily routine much.

A native of San Diego, McGuffie, 19, just arrived in Germany. Used to the restrictions California puts on smoking, McGuffie said he&#8217;ll still find a way to smoke his two cigars and six-to-seven cigarettes every day.

A four-year smoker who goes through half a pack a day, Loth said that although a ban makes sense, &#8220;It sucks having to go outside in the cold (to smoke).&#8221;

Loth&#8217;s idea of sectioning smokers off might seem reasonable to some. But Bavaria has taken the toughest stance of any German state by not allowing restaurants to have separate smoking rooms.