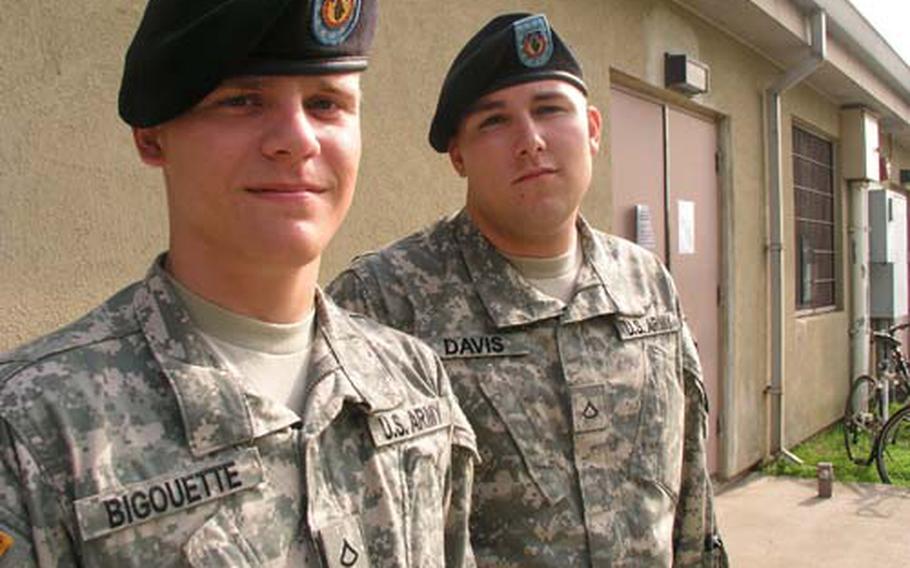 Pfc. Richard Bigouette, left, and Pfc. Joshua Davis were commended by their unit for their roles in rescuing a Korean girl at a popular beach. Bigouette pulled the young girl from the water after hearing her shouts for help. (Franklin Fisher / S&S)

CAMP HUMPHREYS, South Korea &#8212; When Pfc. Richard Bigouette was about 5 years old in Houston, his father, a Gulf War Navy vet, taught him how to swim. Dad heaved him into the pool and told him to paddle like the family dog.

"And after he noticed I couldn&#8217;t go anymore, he jumped in and helped me. It was fun," said Bigouette (pronounced Bee-zhoo-ette), who works as an Apache helicopter weapons system technician at Camp Humphreys in South Korea. He&#8217;s with Company B, 602nd Aviation Support Battalion, part of the 2nd Infantry Division&#8217;s 2nd Combat Aviation Brigade.

The genial and athletic Bigouette, 18, is now being called a hero &#8212; and catching lots of good-natured kidding from his buddies &#8212; for rescuing a frantic Korean schoolgirl who got out of her depth at Haeundae Beach.

Bigouette and his buddy Pfc. Joshua Davis, 19, of Chelsea, Okla., had taken the KTX high-speed train to Busan on June 13 so they could swim at popular Haeundae Beach.

It was a bright, sunny day, and by 1 p.m. there were hundreds on the beach.

Soon after, Davis spotted a girl thrashing at the water about 50 yards from shore. She was crying to another girl closer to shore for help.

Both men started for the girl, with Davis, a less experienced ocean swimmer, trailing Bigouette.

By that point, bystanders were crowding the shore, watching the situation unfold.

The struggling girl was about 15 to 20 yards from Bigouette. Adrenaline surging, he knifed through the water and reached her in what he thinks was three to four seconds.

She looked 9 or 10, Bigouette said. She&#8217;d been repeating a Korean word that he thinks means "help," but when she saw he was American she broke into English. "Save me! Save me!"

He put a hand under her armpit and pulled her toward him, bracing her against his right shoulder but keeping her forward of himself so he could keep an eye on her.

"And then I leaned over on my left side and used my left arm and my legs to swim back."

He relied on strokes his father taught him.

He got her to a sandbar about 20 yards from shore and handed her to several young men. She was crying and shaken but OK.

Their unit heard what happened and commended both soldiers.