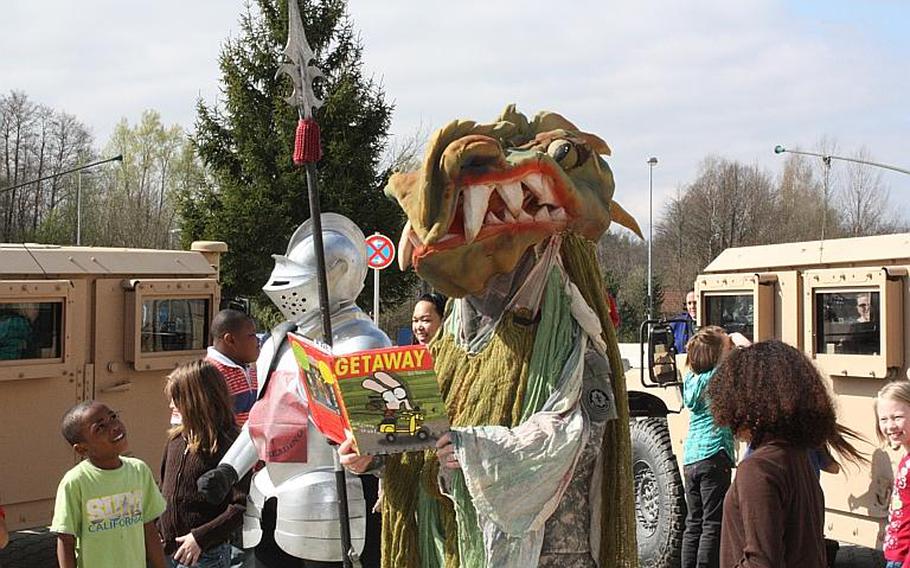 She has allowed students to stick her with massive amounts of duct tape, read books all day on the school roof and dressed up like a dragon.

Watching her run through the school with assistant principal and &ldquo;dragon slayer&rdquo; Becky Balcer in pursuit was the reward for children from pre-kindergarten through fifth grade when they exceeded their goal of collectively racking up at least 500,000 minutes of reading time in March. The 645 students who participated totaled 622,000 minutes, more than 10,000 hours.

But the students did more than that, and they were not alone in their reading frenzy.

During Red Hot Reader Month, they teamed up with the 2nd Stryker Cavalry Regiment, which was deployed to Afghanistan at the time. &ldquo;Even though the soldiers were downrange, they still wanted to be a part of it,&rdquo; said Balcer.

The soldiers would read the same books as the students, and they would then exchange emails, letters and even videos to discuss what they had read.

&ldquo;There are children&rsquo;s books all over the place, including in Strykers and command posts&rdquo; Lt. Col. Douglas Sims, commander of the 1st Squadron, wrote in a letter to the students. &ldquo;Each time I see a copy of &ldquo;Skippyjon Jones&rdquo; in a Stryker I have to laugh.&rdquo;

He went on to write about some of the discussions soldiers share about the books they read in Afghanistan, even comparing some of the stories to situations they were facing there.

The regiment and the school have a 20-year partnership in the community, Balcer said, and this feat is something both students and soldiers will never forget.

And it was recognized. The students were awarded the Military Child Education Coalition, Pete Taylor Partnership of Excellence Award, an award that honors outstanding partnerships between military installations and school districts.

Balcer said students passing in the hall assure her that, although Red Hot Reader Month is over, &ldquo;We are still reading.&rdquo;