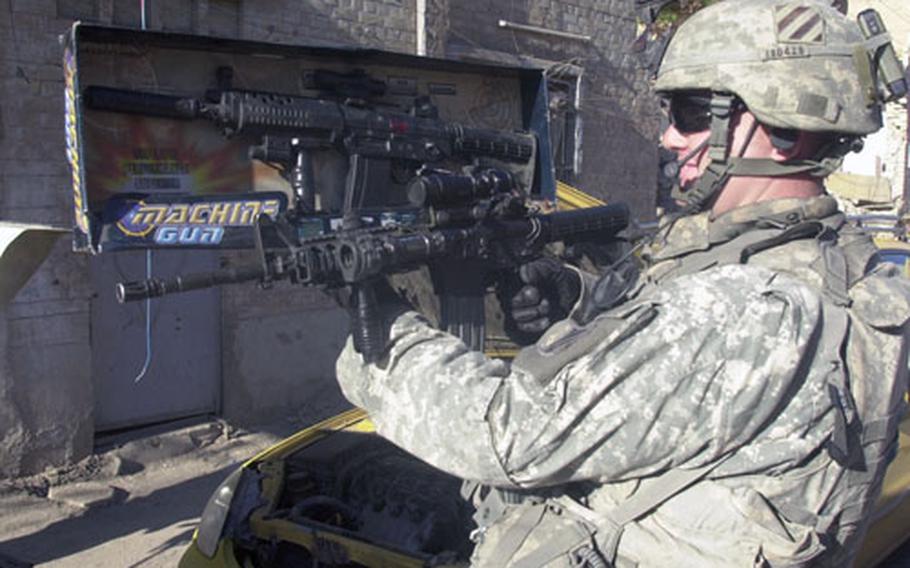 BAGHDAD &#8212; The first thing a visitor notices about Baghdad&#8217;s Adhamiyah district is the streets, flooded with sewer overrun from years of pipeline neglect.

The next thing is how much, at times, this walled-off Sunni neighborhood surrounded by checkpoints otherwise resembles a typical city in a developing nation. Shoppers stroll by the clothing, electronics and convenience stores open for business around 8 p.m. on a Monday. Vendors sell lamb kebabs and sandwiches along the street.

Locals simply appear to be hanging out in front of abandoned buildings and concrete fences pockmarked by bullet holes &#8212; reminders that the past few years were far more violent than they are now.

Inside the home, 1st Lt. Terry Wilkin and an interpreter talk to a woman and several young children, but they&#8217;re mostly interested in a 17-year-old male who claims to be an electrical engineer. His father isn&#8217;t around.

Wilkin doesn&#8217;t detain the boy or treat him much differently than the others, beyond asking him far more detailed questions about his activities.

It&#8217;s an example of standard procedure for the regiment, based out of Combat Outpost Apache in one of Saddam Hussein&#8217;s former Tigris River compounds.

Without an imminent threat, community relations become paramount. But the boy can probably expect another visit soon.

The boy and his work claims can be cross-referenced with human intelligence coming from more than 800 local citizens whom the Army pays to guard checkpoints.

Back at COP Apache, the combined U.S. and Iraqi intelligence efforts get fed into a system similar to Google Earth. Satellite images show thousands of buildings and a mouse click reveals information about their inhabitants.

Although smaller attacks have occurred sporadically during the past few months, troop commander Capt. Ian Claxton gives a lot of credit to the Iraqi checkpoint guards for rooting out the worst of al-Qaida in Iraq.

Waleed Kamil Yassen, a security officer manning a checkpoint outside the tomb of Iraq&#8217;s first king, says the community is small enough for everyone to know each other&#8217;s business.

U.S. forces would like Yassen and many of the other guards to become Iraqi police officers.

However, jobs are scarce.

Getting one requires knowing the right person and bribing him, said Yassen and two others.

But the security guards who can&#8217;t be police will have a shot at employment with U.S.-funded public service works. Residents will work on neighborhood beautification and infrastructure repair, officials said.

It&#8217;s more mundane stuff than when most of the troops arrived about seven months ago, soldiers say.