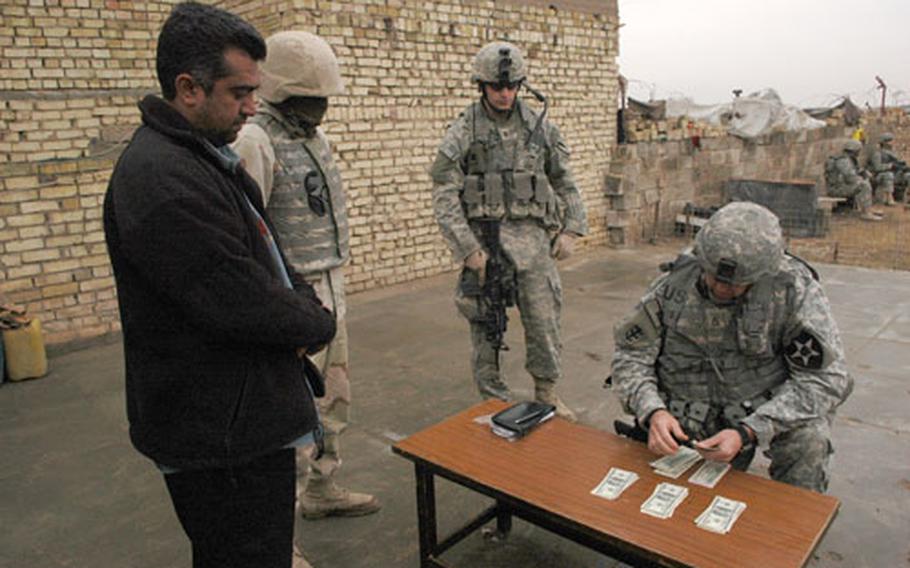 1st Lt. Josh Mantz, 23, of Sunbury, Pa., of the 1st Battalion, 8th Cavalry Regiment, 2nd Brigade Combat Team, brings socks and warm children’s clothes to the family affected by a U.S. artillery strike in late December. His mother rushed the package to Iraq after hearing about the family from Mantz, who found the Iraqis while his unit was doing a foot patrol near Sadr City last week. (By Lisa Burgess / S&S) 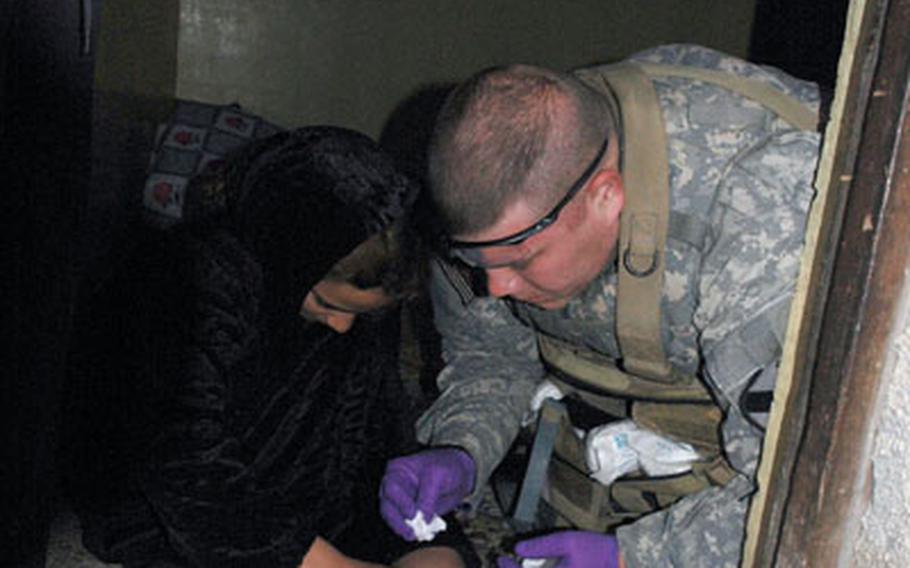 Hajil, an Iraqi girl hit in the leg by shrapnel from a U.S. artillery round on Dec. 29, helps Sgt. Bryan Hays, 34, a medic from Haughton, La., as he works on her wound. Hays is with the 1st Cavalry Division’s 1st Battalion, 8th Cavalry Regiment, which found the family affected by the artillery round. Hays has been supervising Hajil’s medical care. (By Lisa Burgess / S&S)

BAGHDAD - The week between Christmas and New Year&#8217;s Day was tense for troops at Forward Operating Base Loyalty. Mortars falling at all hours. People cringing at loud noises.

So when the huge booms that signal outgoing counterfire started the evening of Dec. 29, it was a welcome sound. It meant the field artillery troops had a bead on the bad guys.

And sure enough, the next day, and the day after that, and even since, life on Loyalty has been a lot quieter.

The guns did their job, giving welcome respite to the troops. But the rounds also hit some people they didn&#8217;t mean to hit.

In the small neighborhood of Al Razul in east Baghdad, an Iraqi family of 17 people &#8212; including 10 children &#8212; had the bad, random luck of having their home located 100 feet away from where the insurgent mortar team set up.

Around 5 p.m. on Dec. 29, the first U.S. round hit one of the two small sleeping rooms the family calls home. Panic-stricken, family members fled outside. They dashed across the wide stone patio and took shelter next to a small structure that surrounds the hole the group uses as a toilet, the head of the family, a sergeant in the Iraqi army who is stationed in Ramadi but home on leave, said through a translator on Friday.

In the space of two breaths, two more shells fell, including one that destroyed a separate cooking shed. Then the fourth shell fell. It hit near the family, clustered in the far corner of the compound.

The shrapnel killed two women. Two girls, in their early teens, were so badly hurt they each lost a leg. Two other children, a 4-year-old boy and a 15-year-old girl, were slightly wounded.

That might have been the end of the story, except for a dismounted patrol conducted last week by 1st Lt. Josh Mantz with Company B, 1st Battalion, 8th Cavalry Regiment, 1st Cavalry Division.

At first, Mantz thought the damage was from insurgent fire. But when he inspected the compound, including looking at shrapnel from the shells, &#8220;it was pretty obvious it was our counterfire.&#8221;

After talking to his superiors about the case, Mantz was not the only soldier touched by the Iraqi family&#8217;s tragedy.

Leaders at FOB Loyalty made the &#8220;extremely rare&#8221; decision to send troops directly to the home of the affected family to offer a condolence payment to help the poverty-stricken family with hospital bills and other problems caused by the shelling.

The decision was a trade-off: It was potentially risky for the U.S. troops. But it was also terribly risky for the family to travel, unprotected and unarmed, to FOB Loyalty to pick up the payment.

So on Friday, Mantz and a group of soldiers visited the family compound. He carried a box filled with warm clothes for the children. It was from Mantz&#8217;s mother, who bought the clothes after hearing the family&#8217;s story from her son.

One of the girls insisted on helping Hays bandage her deep shrapnel wound. Rather than cry, she chewed the fringe of her black head scarf as Hays flushed the wound with hydrogen peroxide.

Outside, the condolence payment was under way.

The money was handed over to the head of the household by Staff Sgt. Malcom Nichols, 46, a 2nd Brigade, 2nd Infantry Division chaplain&#8217;s assistant.

Nichols, who was on his knees at a low table, spoke a few brief words, translated into Arabic, saying that &#8220;no amount of money, large or small,&#8221; could begin to replace those who had died, but that he hoped what was given could be used for some good.

Then, as the adults looked on, he began counting out the money, offered in the name of the people of the United States of America.

Nichols paused as his voice grew thick with emotion.

Afterward, Mantz said he hopes to go back to see the family, bring them more necessities and make sure the girls&#8217; legs aren&#8217;t getting infected.