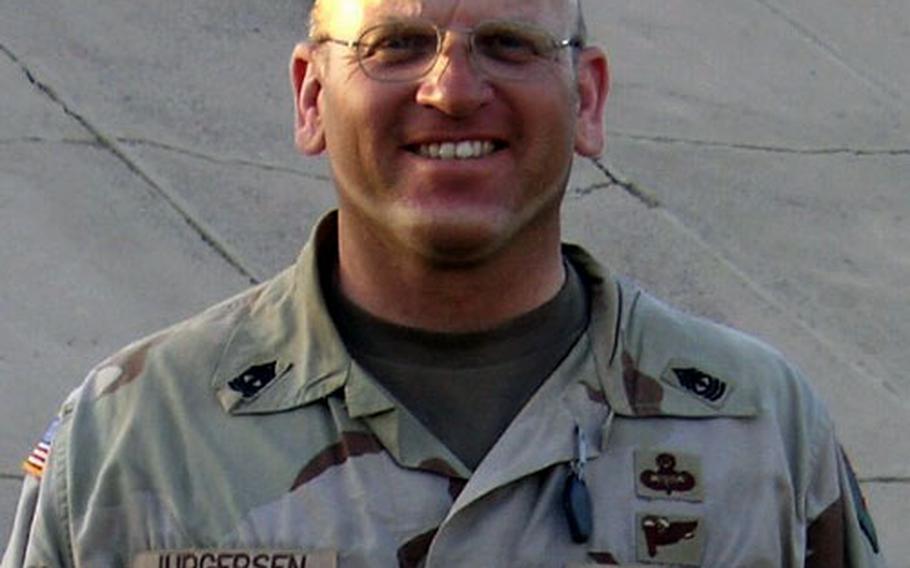 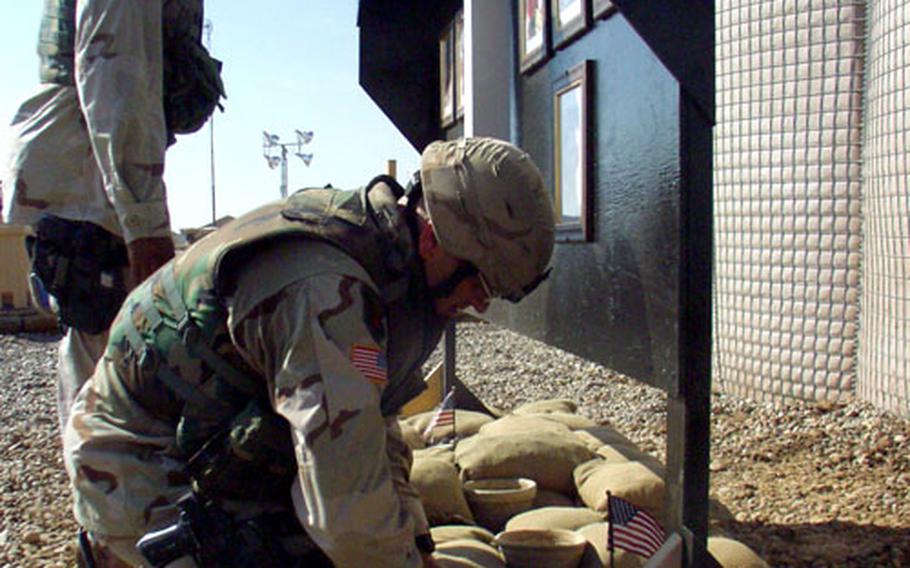 The 42-year-old from Clinton, Iowa, nicknamed &#8220;the Rock,&#8221; is in critical condition at Walter Reed Army Hospital in Washington D.C., mending from his second near-fatal injury in Iraq.

Jurgersen suffered an open head wound, a broken arm and badly injured legs Jan. 26 when insurgents in Ad Duluiyah fired two rocket-propelled grenades at his Humvee. The explosion killed his gunner, Sgt. William Kinzer, and injured two other soldiers riding with him.

Seven months earlier, Jurgersen had been shot in the face during an ambush on a 1-4 Cavalry supply convoy. He endured multiple surgeries on his upper jaw and the soft tissue of his mouth but kept a promise to his troops.

Jurgersen has served 14 years in the Army. After a Pentagon tour as branch manager for all the Army&#8217;s 19D cavalry scouts he joined 1-4 Cavalry in 2002 and deployed with the unit to Iraq last February.

The soldiers who served with him said he is a quiet man with an unmatched work ethic.

His sergeants say Jurgersen runs his unit by the book and strikes fear into any trooper who breaks the rules. He instituted &#8220;night court,&#8221; in which soldiers who committed minor infractions had to come before his desk with their platoon sergeants and face his wrath.

But, they said, he&#8217;s quick to give second chances and will take on anyone to make sure his soldiers are cared for. At camps MacKenzie and Wilson, the 1-4 Cavalry&#8217;s two main bases in Iraq, he pushed hard for quality-of-life improvements, such as a movie theater and phone center.

Before leaving Germany last year, Jurgersen pledged to soldiers and their families that he would personally bring his men home from Iraq. He joined them on dozens of patrols before June 18, when a 1-4 Cavalry logistics convoy came under fire.

Instead of racing away, Jurgersen&#8217;s men got out and fought back. As he lay prone in the firing position, the enemy bullet struck the butt of his rifle and hit him just below the nose. He was sent to Germany for painful surgeries that left his face scarred and forced him to wear dentures.

He returned to Iraq in October, and looked forward to bringing his squadron home in late February or early March.

Just after sunrise Jan. 26, Jurgersen led a five-vehicle convoy to assess the security needs at several polling sites for the upcoming elections. Hummert, who was sitting behind Jurgersen in the trail Humvee, said the patrol had just finished its second stop and was driving through a narrow street.

He later learned two men had fired two RPGs at the passenger side of the vehicle from point-blank range. One exploded inside the Humvee, leaving behind a scene too awful for Hummert to describe.

The driver, a medic, quickly bandaged Jurgersen&#8217;s gaping head wounds and mangled left leg while Hummert, who suffered shrapnel wounds to the arm and leg, called for help to tow the disabled vehicle out of harm&#8217;s way.

Within minutes, Hummert said, a helicopter landed nearby and whisked him and Jurgersen to a hospital. By the end of the day, they&#8217;d flown to Germany for treatment. Doctors put Jurgersen in a drug-induced coma and amputated his damaged left leg below the knee.

Stunned members of the squadron&#8217;s rear detachment visited him in the hospital. Despite his coma, Merritt said, Jurgersen perked up when his men came in.

With his wife, Karin, beside him, Jurgersen was flown to Walter Reed. Petty said his condition has improved. He awoke from the coma a few days ago. Despite his head injuries, he doesn&#8217;t appear to have brain damage.

His troops believe that, having survived one life-threatening wound, Jurgersen will bounce back from this one as well.

Jurgersen has the prayers of his squadron to boost him, and strength his friends say is uncommon even by Army standards.