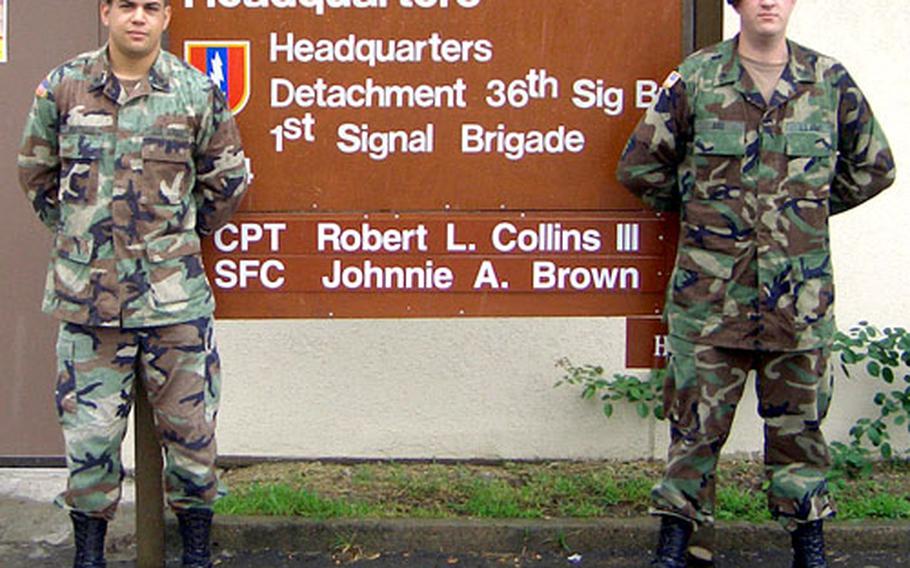 Spc. Norman P. Portillo, left, and Spc. Nathan A. Bird, of the 36th Signal Battalion, have been nominated for Army Achievement Medals after assisting an injured South Korean motorist. (Courtesy of U.S. Army)

Spc. Nathan A. Bird and Spc. Norman P. Portillo, both of Camp Walker&#8217;s Headquarters and Headquarters Detachment, 36th Signal Battalion, were on a routine maintenance support trip to Kunsan Air Base when they hit a small traffic jam on Highway 1.

As they crept forward, they realized the car stalled in the lane had been in some sort of accident.

When the soldiers, and the two South Korean support personnel in the car with them, realized no one was assisting the accident victims, they jumped into action.

Portillo, the first to reach the window, said he was shocked by what he saw.

A passenger had flesh &#8220;about the size of a softball missing from his elbow&#8221; and was bleeding through the open fracture, he said.

Portillo used his uniform belt as a tourniquet while Bird removed his uniform T-shirt and pressed it to the wound to help stanch the flow of blood.

Both Bird and Portillo credit their military training for preparing them to react.

While they worked on the passenger, the South Korean workers helped translate, the soldiers said. The driver and the other two passengers in the car were shaken up &#8212; &#8220;a couple of bruises here and there,&#8221; Portillo said.

Portillo said that the injured man understood immediately they were there to help.

They spent a good chunk of the next three hours in the car discussing the incident.

Capt. Robert Collins, company commander, said he was proud to learn his troops assisted at the scene and submitted them both for Army Achievement Medals.

The soldiers said the last thing they thought about was earning medals.

Bird later phoned the news home to his family.