Soldiers must pass 33 tests to earn badge in infantry training 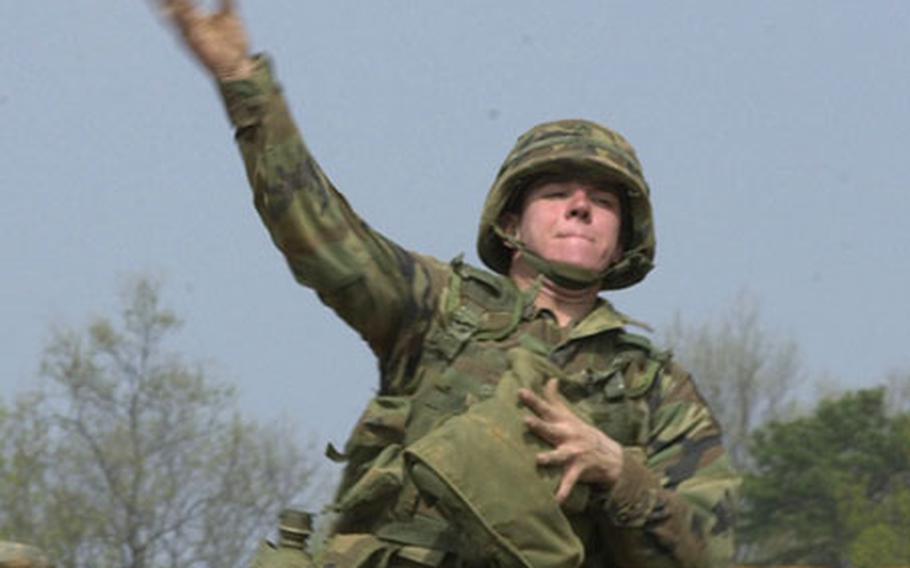 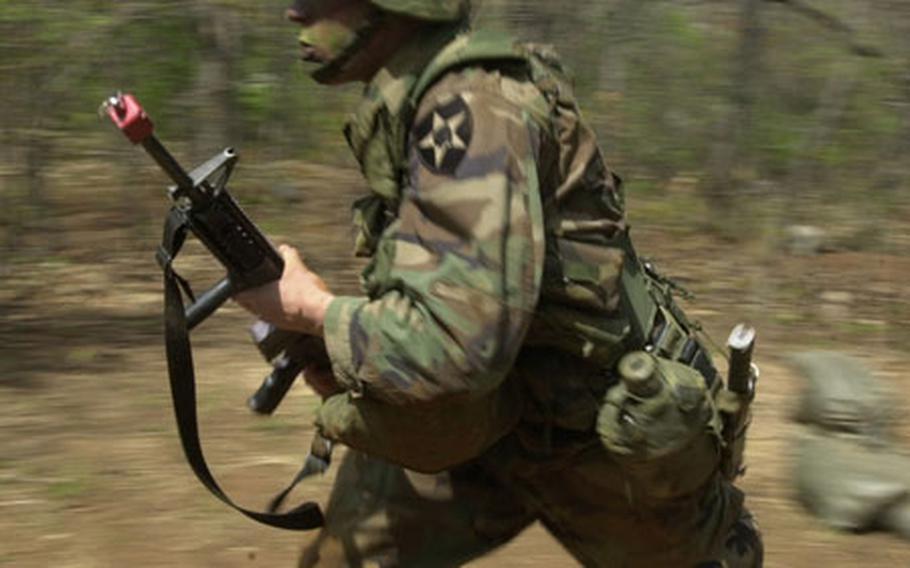 Charge! A 2nd Infantry Division soldier charges during a qualifying run for the Expert Infantryman&#39;s Badge at Warrior Base in South Korea. (Greg L. Davis / S&S) WARRIOR BASE, South Korea &#8212; Pvt. Xong Yang hurled himself across the white tape finish line Thursday, sweaty and breathing hard after rolling, crawling and running his way through the woods.

The Army says the badge, a crucial qualification in an infantryman&#8217;s career, is a sign the soldier is combat-ready, confident and can handle the rigors of war.

When the older soldiers wear their blue Expert Infantryman&#8217;s Badge, the younger ones look on with want. The rectangular patch has a long musket, indicating the soldier&#8217;s mettle at infantry skills.

He pulled out a crumpled score sheet and tallied: He was four tasks away from getting the badge.

Soldiers say they spend weeks studying and training and that getting the badge is a mix of brains, brawn and luck.

In the past few weeks, more than 1,300 soldiers have tested for the badge at Warrior Base, just south of the Demilitarized Zone. Only about 20 percent successfully complete the 33 tasks, which range from lobbing grenades to tying tourniquets to wallowing in the mud on their bellies.

Soldiers can fail two tasks &#8212; but they must retest within an hour. Failing a second time means they&#8217;re done.

The tests encompass firing weapons, lobbing grenades, map navigation, firing range cards and medical skills. At the field dressing station, soldiers were tested on how to properly apply a tourniquet on a bleeding wound.

The task isn&#8217;t hard, and about 90 percent of soldiers pass on their first try, said Sgt. 1st Class Scott Snyder, who runs the station. But the skill is time consuming, and it&#8217;s essential not to rush, said Pvt. Jeffrey Eakon, who passed on his first try.

They had chances to practice before the real tests, Dean said. If they pass the tests, it shows they have met an Army standard that&#8217;s key to combat, he said.

But soldiers shouldn&#8217;t be sad if they don&#8217;t get the badge on the first try, said Sgt. Maj. David G. Anderson, 2nd Brigade operations sergeant major.

Only one of 100 soldiers managed to get the badge when the competition first started in 1944, Anderson said.

Even those who don&#8217;t get it are receiving good training and have a positive experience, said Command Sgt. Maj. James Lucero, 2ID sergeant major.