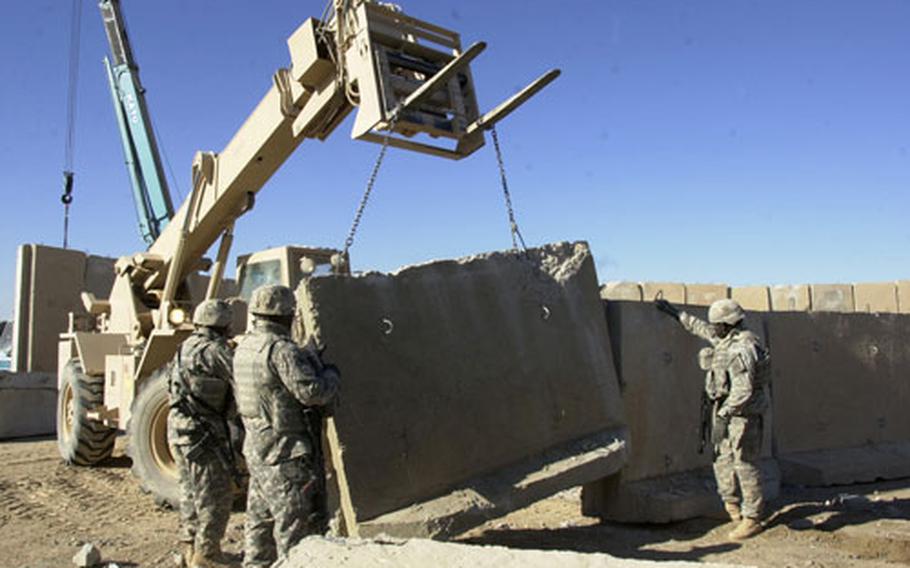 NARWAN, Iraq &#8212; As sunset prayers played through a mosque tower&#8217;s loudspeakers across the street, soldiers worked on sprucing up their new home.

A couple of years ago, U.S. commanders pondered &#8220;smaller footprints&#8221; and isolated bases in Iraq. Combat Outpost Salie is about 50 yards away from a large outdoor market and it is surrounded by homes, businesses and a communications tower. It also connects to an Iraqi police station.

Its existence is a reflection of the Army&#8217;s new counterinsurgency strategy to live within neighborhoods instead of just patrolling them, say officers from the 3rd Brigade&#8217;s 1st Battalion, 10th Field Artillery.

Some soldiers said that when they first began flattening the earth in mid-October, they were surprised at how many rooftops could be seen from the site. However, Narwan has been peaceful in recent months and construction went very smoothly over 30 days, said Maj. Luis Rivera, 1-10 battalion executive officer.

Guard towers and 360-degree surveillance also will keep the base secure, Rivera said.

Earlier this year, Shiite extremists fired rockets at Forward Operating Base Hammer from Narwan. Since then, however, Shiite insurgents have been relatively quiet in what is now an almost entirely Shiite town of about 100,000 people.

If they rose up again to attack Salie, they would be firing perilously close to Shiite property, as well as the mostly Shiite Iraqi police building. They would be held accountable by their friends and neighbors, said battalion commander Lt. Col. Mark Sullivan.

Soldiers from the 3rd Squadron, 1st Cavalry Regiment attached to 1-10 will live at the base with 1-10&#8217;s command; soldiers from other units will likely join them, officials said.

The soldiers have mixed feelings about leaving the more isolated and much larger Forward Operating Base Hammer.

A small dining facility, meager recreation and bare-bones facilities for now represent the downside, Greer and others said.

An Internet cafe and other amenities are scheduled to be up and running by Dec. 15, Rivera said.