Soldiers mourning the death of their most senior 'ajumma' 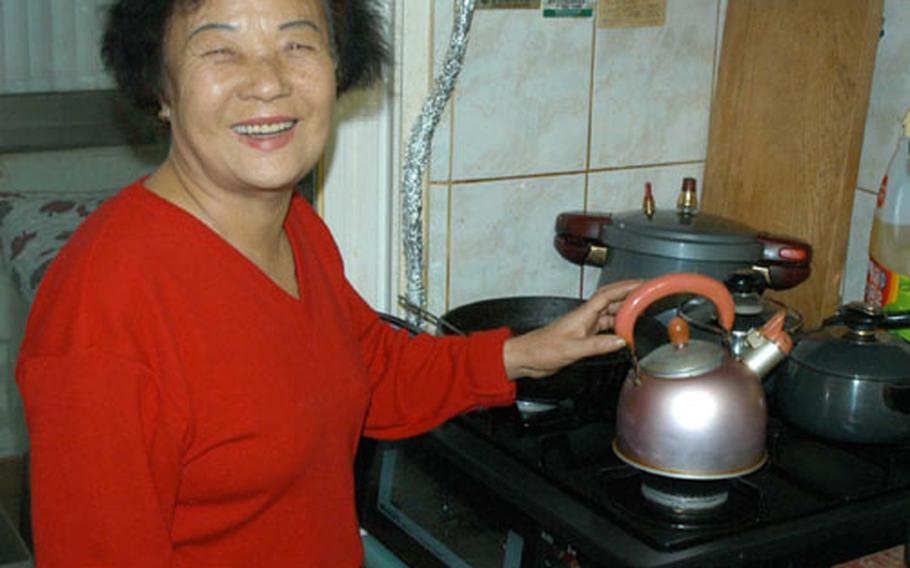 Ki Tae-cha has served food and drinks to American soldiers in the field for more than 30 years. Her friend, Park Nam Sun, recently passed away during a field exercise after 40 years of similar service. (Seth Robson / S&S)

CAMP CASEY, South Korea &#8212; Soldiers from the 2nd Infantry Division&#8217;s 1-72nd Armored Battalion are mourning the death of their most senior ajumma, who died of a heart attack at Twin Bridges Training Area earlier this month.

Ajumma Park Nam-sun lost consciousness after preparing food for soldiers at Twin Bridges in early December. Medics from 1-72nd performed CPR, reviving her three times before Korean paramedics arrived, but efforts to resuscitate her a fourth time were unsuccessful.

Ajummas are attached to every company in Area I, including 1-72nd Headquarters and Headquarters Company, where Park was the ajumma for more than 40 years, officials said.

&#8220;When we are in the field, it is either MREs or the hot meal service in the dining facility we bring with us. It is typical Army food, which is not bad, but after a while it is nice to have something different,&#8221; Wilson said.

Sgt. Christopher Olejnik was one of several HHC soldiers who attended Park&#8217;s funeral.

He helped carry her coffin from a hospital in Dongduchoen to a bus, where it was stowed in the baggage compartment and taken to her former home and a family business before being buried in a hill plot next to her late husband.

Olejnik said ajummas have amazing stamina in the field, bringing food to isolated locations such as the tops of hills inaccessible to vehicles, and they have an uncanny knack of finding units in concealed positions.

Her house, near the front gate of Camp Casey in Dongduchoen, is filled with pots and pans, a small gas stove that she uses in the field, a large, well-stocked refrigerator and a smaller refrigerator for kimchi.

Ki said she had seen many soldiers leave South Korea and return years later with higher ranks. She remembers one captain, now a major, particularly fondly.

Ki said she loves her job.