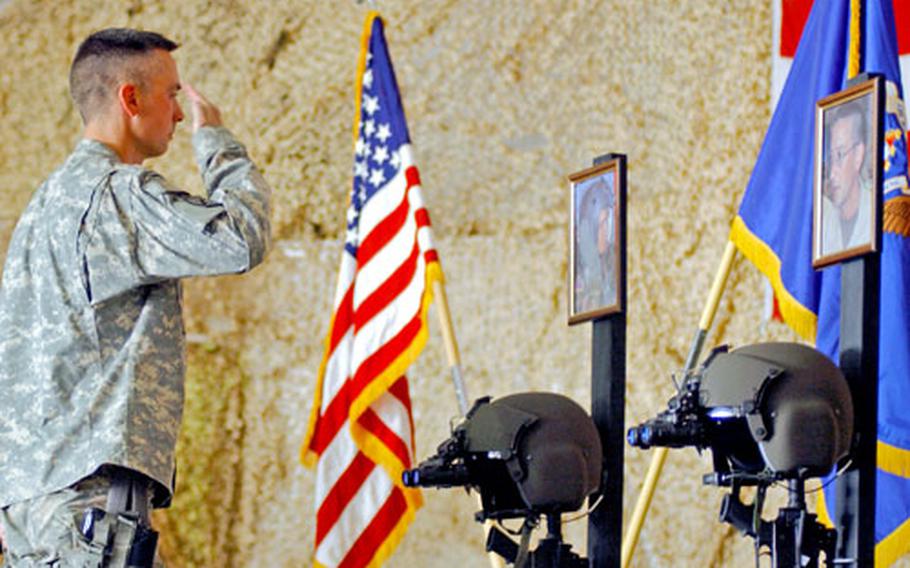 Task Force Centaur commander Lt. Col. William Metheny salutes during a memorial ceremony last week at Bagram Air Base. The task force lost six of its air crewmembers when their CH-47 Chinook helicopter crashed May 5 near Asadabad. Four other soldiers were killed in the crash. (Doug Sample / Courtesy of U.S. Army)

U.S. military officials have released details of a memorial service in Afghanistan for some of the 10 soldiers killed in a Chinook crash earlier this month.

The six-man crew that flew the helicopter known as &#8220;Colossal 31&#8221; were assigned to Company B, 3rd Battalion, 10th Aviation Regiment and were killed along with four other soldiers in the May 5 crash near Asadabad, in eastern Afghanistan. Military officials said enemy fire was not suspected in the incident.

According to an account of the memorial service, held May 8 at Bagram Air Base, more than 500 members of an aviation task force attended the ceremony.

&#8220;We lost a lot when Colossal 31 went down. We lost our fellow soldiers, our friends, and most of all we lost those who we will always call our family,&#8221; Capt. Eric Phillips, Company B commander, was quoted as saying.

The helicopter, its crew and passengers were part of Operation Mountain Lion, U.S. officials have said, an ongoing &#8220;offensive operation&#8221; aimed at troublesome spots along Afghanistan&#8217;s northeastern border with Pakistan.

The incident occurred when the helicopter was sent in to pick up troops on a mountain ridge, according to accounts of the memorial service.

Lt. Col. William Metheny, Task Force Centaur commander, praised the soldiers for their courage, saying they were warriors who knew of the risks that accompanied their profession.

&#8220;They knew there were soldiers on a remote mountain top that needed to get off that mountain,&#8221; Metheny was quoted as saying. &#8220;They knew the mission would be difficult, but they decided it was important enough to execute to the very best of their abilities &#8230; We don&#8217;t yet know all that happened that night. But we do know the crew of Colossal 31 prepared themselves and the other crews on that mission to accomplish what they needed to do. They refused to leave their comrades.&#8221;

&#8220;Do we withdraw, lose heart or cast doubting eyes to our teammates, or do we grow and move forward, take care of one another, working to strengthen our formations, continuing to become one team with one fight?&#8221; he was quoted as asking, rhetorically. &#8220;Our friends of Colossal 31 would ask us to chose the latter.&#8221;

The unit arrived in Afghanistan in January.