Soldiers march in South Korea in remembrance of 9/11 attacks 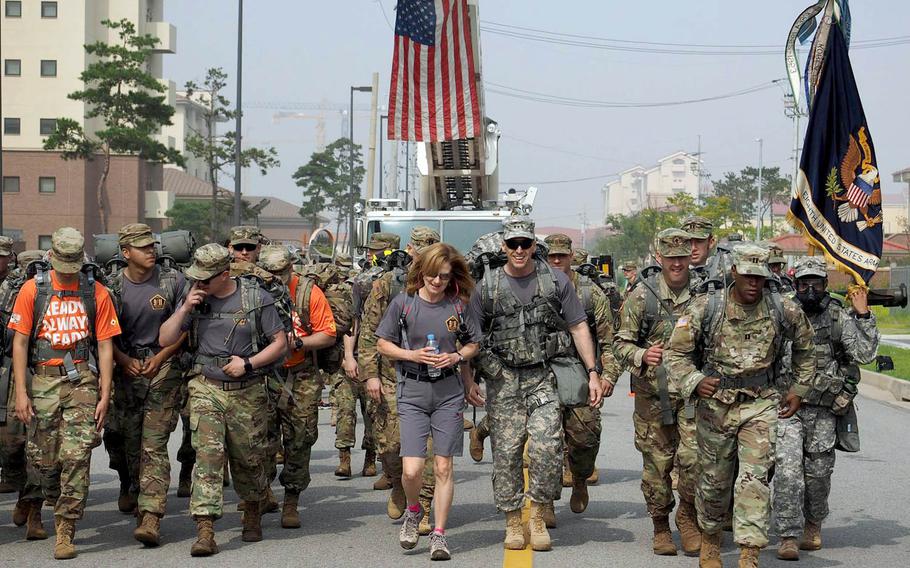 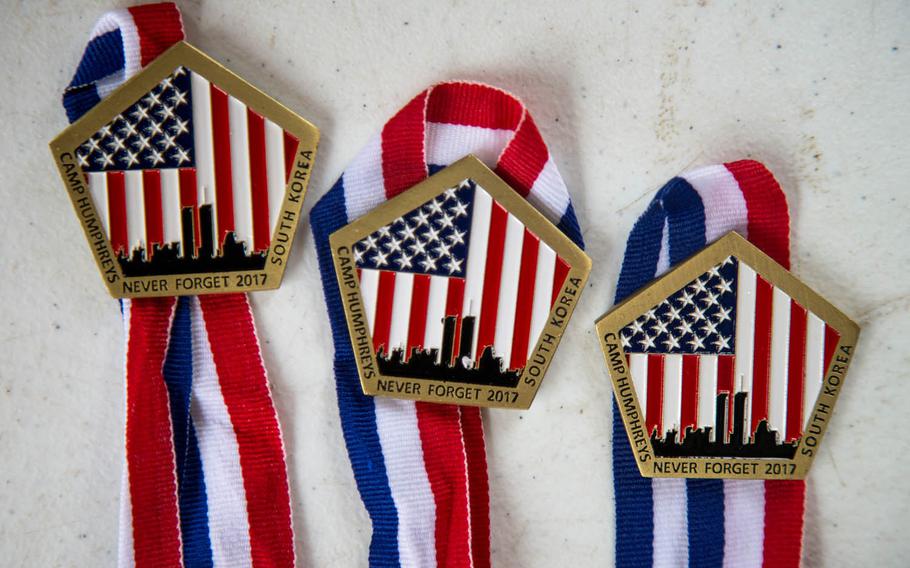 A piece of the World Trade Center donated to Camp Humphreys, South Korea, is displayed during an award ceremony at the base, Monday, Sept. 11, 2017. (Marcus Fichtl/Stars and Stripes)

The 264 participants marched in honor of those affected by terrorist attacks on Sept. 11, 2001 — the largest attack on U.S. soil since Pearl Harbor and the spark for the invasion of Afghanistan.

The march raised $5,384 through pledges and T-shirt sales for the Army emergency relief fund, an interest-free loan service for soldiers.

“There’s something about the ruck march that’s endemic to the Army,” said event coordinator Capt. Stephen Page, 28, of the 304th Expeditionary Signal Battalion and a native of Boise, Idaho. “Suffering a little bit on this course shows solidarity to those overseas still suffering day in day out.”

The marchers carried 35 pounds in their rucks and trekked a 9.11 mile course that weaved around the airfield through the old post and finally looped back to the new barracks at the north of the base.

Soldiers entered as individuals or teams vying for medals and ribbons. The fastest individual raced in at 1 hour, 9 minutes, and the 8th Army staff kept a continuous relay during the entire 48-hour event.

Nearly 3,000 people died when hijacked planes slammed into the World Trade Center, the Pentagon and a field near Shanksville, Pa., on Sept. 11, 2001. Many of those overseas, like most of the marchers this weekend, were making their way through grade school when the attacks happened.

“I remember being 11 years old, watching the attacks, watching the towers fall and the Pentagon halfway in ashes,” Paige said. “It turned a lot of people in my generation toward the military. The military became what I wanted to do; I wanted to try to prevent this from ever happening again.”

With speakers blasting on his ruck at 4 a.m., Sgt. Dustin Tonne of the 501st Tech Escort led his 10-person team to victory with a time of just over two hours. While Tonne was just a high school freshman in 2001, the Washington state native felt the effects of 9/11 years later in Afghanistan.

He wears a black memorial bracelet on his wrist.

“[The attack] is the reason that there’s so many on the ground currently — the follow-on wars, the aftermath of it all,” said Tonne, now 31. “Remembering all those I know who have fallen because of those events is why I rucked today.”

The marchers are among the 28,500 U.S. troops guarding against North Korea, a nation that has technically been at war with the United States and South Korea since their 1950-53 war ended in an armistice instead of a peace treaty.

The conflict in Afghanistan, meanwhile, has been America’s longest sustained armed conflict and will hit 16 years next month. In two years, soldiers who were born after the Sept. 11 attacks will be deploying to Afghanistan.