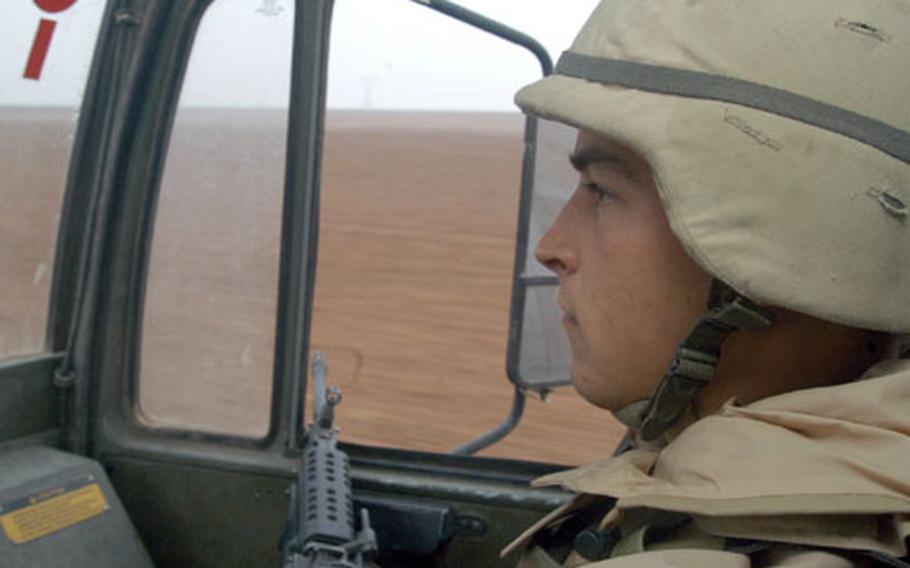 With nothing but vast open desert surrounding him, Pfc. Greg Schlaht, 20, from Aberdeen, Wash., pulls security from the passenger seat of a a 2½-ton truck during a four-hour trip to remote bases near Qayyarah Air Field in northern Iraq. Schlaht is an ammunition specialist for the 2nd Battalion, 320th Field Artillery Regiment of the 1st Brigade, 101st Airborne Division. (Kendra Helmer / S&S) Pfc. Jeremy Davidson, 21, from Cheyenne, Wyo., enjoys some hot breakfast at the remote Objective Wolf camp, from which he guards the Iraq-Turkey pipeline. (Kendra Helmer / S&S)

Throughout Iraq, soldiers living at isolated camps that don&#8217;t have dining facilities look forward to daily delivered meals, even if the grub is just shriveled breakfast sausage and rubbery pancakes.

Davidson is among 10 soldiers at the camp guarding the Iraq-Turkey pipeline. Such a remote camp &#8212; just a building in the middle of the barren desert in northern Iraq &#8212; doesn&#8217;t get many visitors. So trucks driven by guys such as Staff Sgt. Nery Ortiz are a welcome sight.

&#8220;We pretty much do everything around here that requires transport because we&#8217;re the only people that have the trucks,&#8221; said Schlaht, 20, an ammunition specialist from Aberdeen, Wash.

The soldiers, who transported ammunition for their battery during the war, said the delivery runs are tedious. Schlaht said he wants to do &#8220;anything rather than this. It&#8217;s monotonous, the same routine every day.&#8221;

Their group of nine soldiers gets up at 5 a.m. and is on the road by 6:30. The soldiers have no need for their GPS system that tells them their location: they know it all too well.

Bumping along the two-lane road at 40 mph, the trucks drive past more sheep than vehicles. The landscape is desolate, dotted with a few mud houses. Families congregated outside their homes wave, and children give the thumbs-up.

In addition to Objective Wolf, they drop off supplies for 40 soldiers at the Al Hatra hotel and for 15 soldiers at the Objective Jaguar North ammunition supply point. The food is kept warm in &#8220;mermite&#8221; containers. Other supplies include water, mail, repair parts and medical supplies. They also give lifts to soldiers.

The trucks return to the airfield at about 10 a.m. Soldiers do maintenance on the vehicles and pick up supplies for the afternoon run, which leaves about four hours later &#8212; same route, same mission.

They return to the airfield four hours later and are finished at about 9 p.m. after more maintenance and picking up goods for the next morning, said Ortiz, 36, from Belize.

While the soldiers in Qayyarah said the only problems they had were kids breaking their windows with rocks, Capt. Rafael Fajardo said his platoon was targeted by several roadside bombs during supply runs in Mosul.

Fajardo is the logistical supply officer for the 3rd Battalion, 502nd Infantry Regiment. From Area of Operations Glory, the 21 soldiers in the battalion support platoon run about five missions daily to 700 soldiers at four camps.