Soldiers look to ATV rides to beat stress of returning 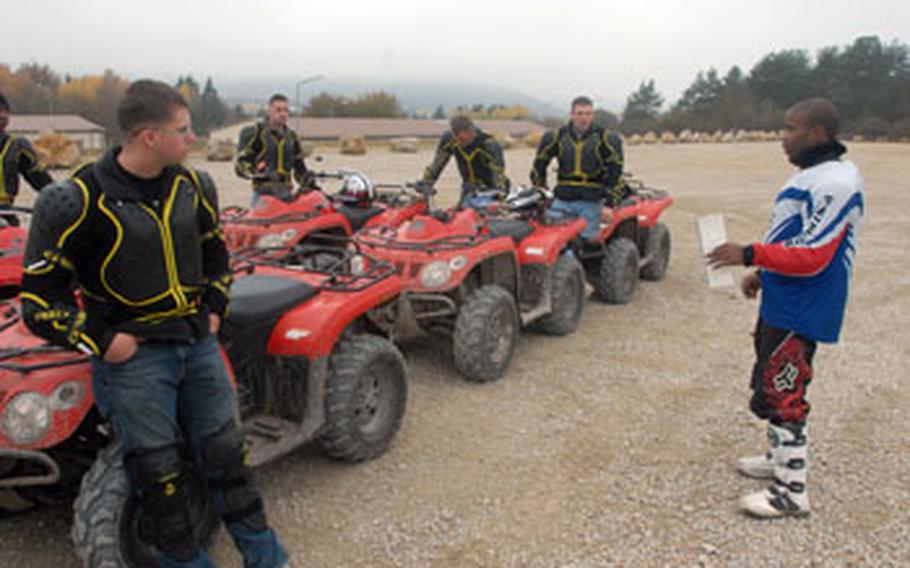 Last week, they used the same type of four-wheeled motorcycles to blow off steam after returning home.

The daylong safety course and trail ride is part of Warrior Adventure Quest &#8212; a program that aims to help soldiers beat post-deployment stress through adventure sports.

One of the Company B soldiers riding an ATV last week was Pfc. Christopher Gist, 20, of Union, S.C. Gist said he and his buddies just returned from Forward Operating Base Baylough, a platoon-size outpost high in the mountains of Zabul province, Afghanistan.

Gist said he rode ATVs regularly in South Carolina but never thought about the techniques he was using until he took the course at Hohenfels.

"This really does ease us back into garrison life," he said of the course. "It&#8217;s hard going to garrison standards after being over there. In Afghanistan you don&#8217;t have to worry about anyone else except your guys &#8212; your own platoon."

So far, the program has been popular. Units participating in Warrior Adventure Quest at Hohenfels can choose to participate in mountain biking, skiing and whitewater rafting. But since the ATV rides were introduced, every returning unit has chosen that option, he said.

After a morning training session that included some technical riding on hillsides, the soldiers set off on a trail ride through the training area, which includes hundreds of acres of forested, rolling terrain that the Army uses to prepare troops for missions to Iraq and Afghanistan.

Another soldier who took the course, Spc. Lucas Dispennette, 24, of Dayton, Ohio, said it was his first time on an ATV.

The goal of the Warrior Adventure Quest program is to help soldiers find a healthy way to relieve any stress they experienced downrange. Dispennette had more stress than many soldiers who deploy after he was dragged several hundred meters downstream during a river crossing while on foot patrol.

"I died over there and was brought back to life," he said of the experience, in which he was dragged underwater and lost consciousness.

When he was pulled from the river he had no pulse but other soldiers revived him with cardiopulmonary resuscitation. He was medically evacuated by helicopter to a large base, but returned to his unit six days later, he said.

Dispennette said he doesn&#8217;t have any lingering issues from his near-death experience. But he said that the ATV ride would help a soldier struggling to deal with something that happened to them downrange.

"You are out there with the guys having fun. It would break down some things to where you would feel more open to talk," he said.

Dispennette said despite the brief exhilaration of the ATV ride, he finds garrison life so monotonous that he plans to volunteer to go back downrange.