Soldiers from Camp Humphreys carry trash they&#39;ve collected on streets of the Anjung-ri section outside the post. (Roger Edwards / Courtesy of U.S. Army)

Soldiers from Camp Humphreys carry trash they&#39;ve collected on streets of the Anjung-ri section outside the post. (Roger Edwards / Courtesy of U.S. Army) 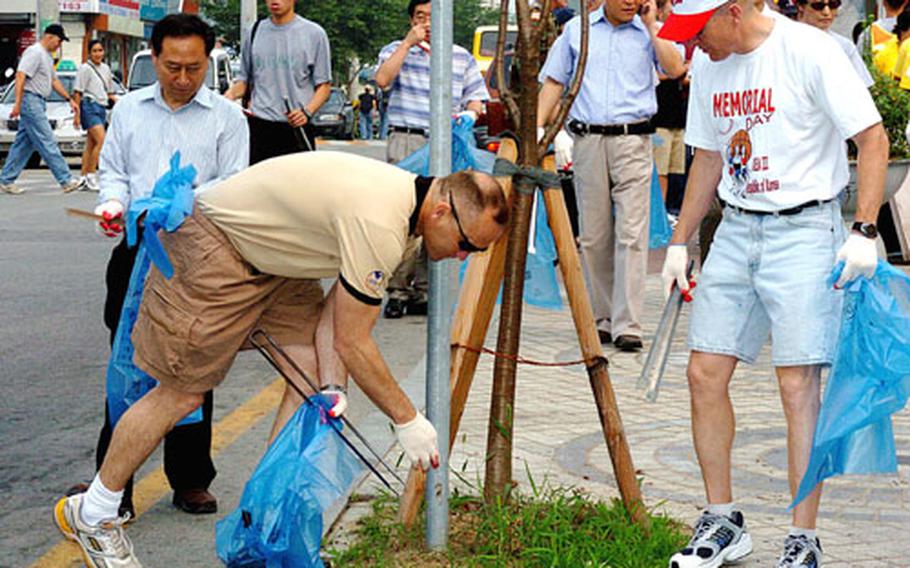 PYONGTAEK, South Korea &#8212; The Army at Camp Humphreys is mounting a program of annual cleanup days in which troops will volunteer to join South Korean residents in picking up bottles, cans and other litter in the Anjung-ri area outside the post.

In past years, off-post cleanups were left to the initiative of individual Camp Humphreys units, happened only occasionally and tended to focus only on the main shopping street near post, said Susan Barkley, spokeswoman for the Area III Support Activity, which runs the post.

But post officials have decided to centrally coordinate an annual cleanup day involving all Camp Humphreys units. And they plan to cover a broader area of Anjung-ri &#8212; up to five kilometers (about three miles) outside the post. They will mark up maps that would divide the area into cleanup sectors and assign each unit its own sector, Barkley said.

Individual units will be free to clean their designated areas whenever they want, Barkley said, not just on designated cleanup days.

Camp Humphreys kicked off the new system June 25 with a cleanup that joined U.S. and South Korean servicemembers and Korean residents. It covered an area of a little over a mile northwest of the main gate, Barkley said.

&#8220;This was the first time we had done it as an installation,&#8221; she said. &#8220;They were cleaning up any trash, litter, bottles, cans, and they also picked up small branches or weeds that may have been pulled out. Some people had brooms with them, they were kind of sweeping the streets. But whatever was there, we were cleaning it up.&#8221;

Taking part from Camp Humphreys were about 300 U.S. soldiers, Defense Department civilians and about 75 members of the South Korean air force stationed at the post, Barkley said. Joining them were about 50 Anjung-ri residents, mainly &#8220;business people, people that owned a shop or restaurant or something&#8221; as well as several local officials.

County workers later picked up the trash, which the teams had put into plastic bags.