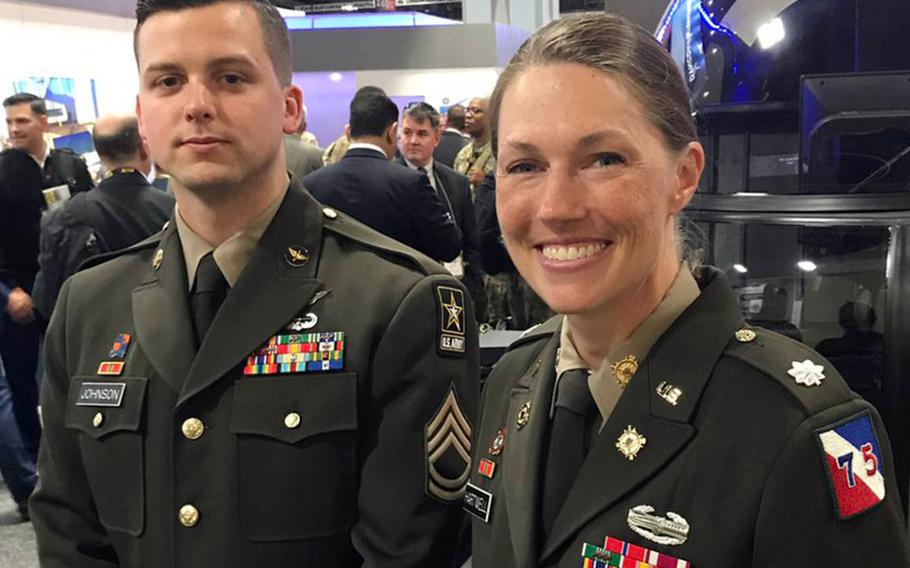 A new uniform modeled after the World War II-era "pinks and greens" were presented last week at the Association of the United States Army's annual exposition in Washington, D.C. (COURTESY OF THE U.S. ARMY)

CAMP ZAMA, Japan — Some soldiers like the look of proposed retro-style uniforms unveiled by the Army last week but say they already have too many outfits.

The pinkish-brown trousers and dark olive jackets, modeled after World War II-era uniforms known as “pinks and greens,” were presented by Program Executive Office Soldier at the Association of the United States Army’s annual exposition in Washington, D.C.

The gear was designed for everyday office wear. If adopted, the existing blue Army service uniform would be used only for formal occasions, officials said.

Some soldiers at Camp Zama, Japan, said Wednesday that they like the look of the pinks and greens.

But Zama-based troops weren’t keen on buying another outfit barely two years after the Army phased out green office clothes and an older blue dress uniform.

“That’s a great-looking uniform, but I just bought the [Army Service Uniform] about two or three years ago,” said Staff Sgt. Michael Hall, a chemical, biological, radiological and nuclear specialist. “I absolutely don’t want to buy another dress uniform so soon.”

Sgt. Maj. of the Army Dan Dailey said in a statement last week that enlisted soldiers get clothing allowances and don’t pay for uniforms out of their own pockets.

Dailey said the next prototype of the men’s proposed uniform will include a belt worn over the jacket and that a panel of female soldiers will convene to make decisions about the women’s uniform.