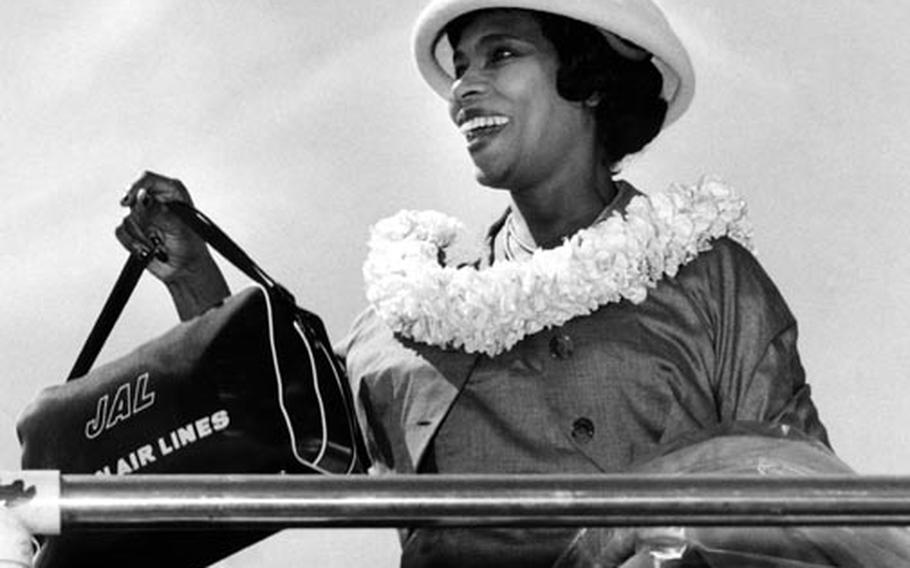 Marian Anderson arrives in Japan in September, 1957. (Stars and Stripes)

"When I sing for an American military audience, I feel that I am singing to a cross section of America — an America which enjoys all kinds of music," Miss Anderson said.

She drew the largest single military audience in Korea of any entertainer during the Korean conflict, the USIS says.

MISS ANDERSON flew to Tokyo from Honolulu. As she stepped from the plane she was wearing a ginger flower lei presented to her In Hawaii.

The opera star will spend two days In Tokyo before leaving for Korea.

"I want to visit the many friends I made during my last tour here four years ago," she said.

MISS ANDERSON will then fly to Korea on the first leg of a two and one half month tour of the Far East under the auspices of the U.S. State Department.

After concluding scheduled concert engagements in Seoul and Pusan, she will give a free concert for United Nations personnel in the Seoul area on Sept. 27.

Miss Anderson said that she would give her military audience the same concert she would present throughout her tour in the Far East.

Her tour after she leaves Korea will take her to. Taipei, Hong Kong, Manila, Saigon, Rangoon, Karachi and through India before she returns to the United States by way of Europe.