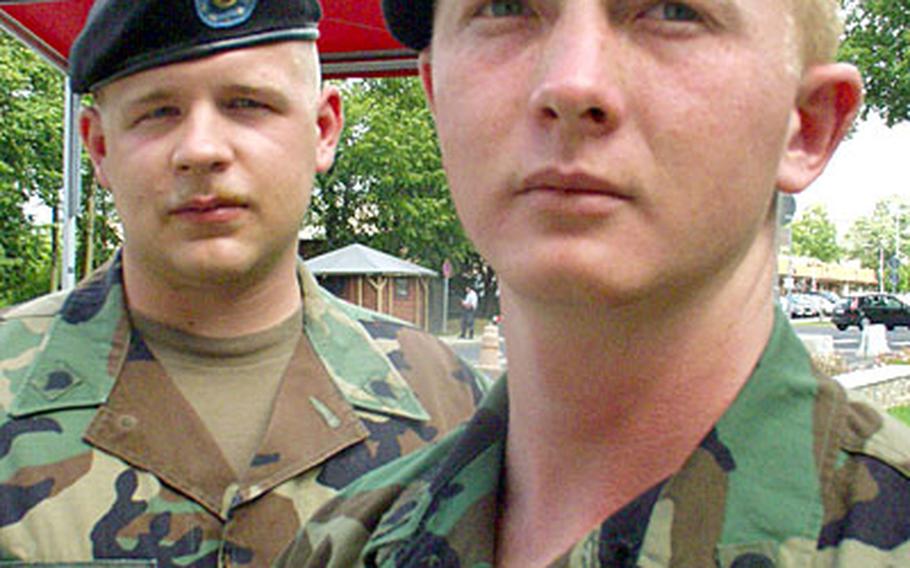 KITZINGEN, Germany &#8212; After an evening of clubbing with friends, Spc. William Foreman and Spc. Joshua Smith stepped out of the B8 bar in downtown Kitzingen about 4:30 a.m. last Sunday expecting a breath of cool, clean night air.

They lingered outside a few minutes with their dates, waiting on a buddy still inside. Their noses told them something was wrong.

Across the street, they saw fire burning through the roof of a four-story building.

The two Iraq war veterans, both members of the Kitzingen-based 121st Signal Battalion, reacted quickly. Their actions during the next half hour have earned them accolades from German police and the Army. The 1st Infantry Division intends to nominate them for the Soldier&#8217;s Medal, the highest award for heroism outside of combat.

Having spotted the flames, the two soldiers hurried across the street toward the back of the building but found it surrounded by a high wall. So they raced around the block past Kitzingen&#8217;s most famous landmark, the &#8220;tipsy tower,&#8221; so-called because of its crooked top.

Down the street they found an off-duty German policeman struggling to get through the front door of the building, which housed a Turkish bakery and two upstairs apartments.

The trio punched a hole in the door frame and broke a window to get in, but fire already had damaged the stairs so badly they didn&#8217;t dare climb them. They ran to the back of the building and peered through a pair of windows into a rear courtyard.

&#8220;When we looked out we saw a female, a woman, lying on her back, unconscious,&#8221; Foreman said. A garbage can and baby stroller had fallen on top of her.

Foiled by a locked back door, they broke the two windows and dodged a shower of burning debris to get to her. Her clothes had caught fire.

The policeman used a blanket to smother the flames; then they placed her beneath an overhang that offered a little protection. Some firefighters who had reached the scene broke down the door with an axe. Smith, the policeman and a firefighter then carried her through the burning bakery to an ambulance outside.

With the injured woman now in the care of rescuers, Foreman and Smith headed back into the building in search of more victims.

They waited by the ambulance for about half an hour. Paramedics took them to the hospital to check for smoke inhalation. Their lungs were fine, though Foreman had suffered a cut on his hand and Smith a burn on his shoulder. The two got back to their rooms at Kitzingen&#8217;s Larson Barracks by midmorning.

They would later learn that the fire had been one of the biggest in Kitzingen in years. No one died, but the woman they&#8217;d rescued still is hospitalized with serious injuries. Police said she had fallen while trying to jump from a third-floor balcony to a neighboring rooftop one floor below.

Two of her children, a 17-year- old girl and a 12-year-old boy, and a neighbor, 42, suffered less- serious injuries. A gasoline canister found in the charred building led police to suspect an arsonist set the fire, according to a police department news release. A team of fire investigators from Munich has asked witnesses to come forward.

Smith and Foreman spent much of last week answering questions from friends in their unit.

Both had experienced close calls during their year in Iraq. A rocket had struck Foreman&#8217;s barracks without exploding, and a shower of rocket-propelled grenades had once narrowly missed Smith&#8217;s convoy. But neither had been called upon under fire until they came home to Germany.