Soldiers killed in Afghanistan return to US in ‘very emotional’ ceremony 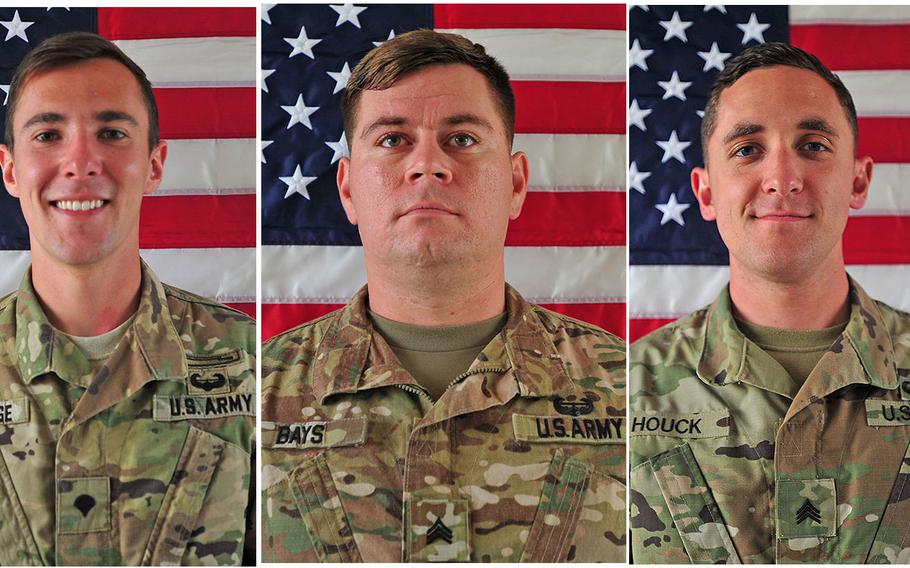 Cpl. Dillon C. Baldridge, Sgt. William M. Bays and Sgt. Eric M. Houck were killed an Afghan soldier turned his gun on them in an apparent insider attack Saturday, June 10, 2017 in eastern Afghanistan’s Nangarhar province, where they were assisting in the battle against Islamic State terrorists. (U.S. Army)

WASHINGTON — They were sons and husbands, fathers and brothers. They were soldiers hailed as “heroes” and “amazing” young men, each a volunteer who chose an Army job that would place him on the front lines.

The bodies of Sgt. Eric M. Houck, Sgt. William M. Bays and Cpl. Dillon C. Baldridge were returned to the United States on June 12 after an Afghan soldier turned his gun on them in an apparent insider attack Saturday in eastern Afghanistan’s restive Nangarhar province, where they were assisting in the battle against Islamic State terrorists.

The sacred homecoming ceremony, known as a dignified transfer, in which the American flag-draped caskets carrying fallen servicemembers’ remains are returned to their families at Dover Air Force Base in Delaware was “very emotional” and “very real,” Houck’s wife Samantha said Tuesday morning.

“There aren’t a lot of words — my baby is on home soil, but this, this isn’t the way it was supposed to be,” she said through tears. “It is not the way I wanted it.”

American and Afghan officials said an Afghan commando killed the three 101st Airborne Division soldiers while they were conducting an operation in the Peka Valley, where U.S. and Afghan forces have been battling ISIS for months. The Taliban has claimed one of their insurgents infiltrated the Afghan military in order to kill foreign servicemembers, though the Pentagon has not confirmed those details, citing an investigation into the incident.

Their deaths come as the United States weighs its future in Afghanistan, where after nearly 16 years of war — the longest in American history — top Pentagon officials characterize it as “a stalemate” with the Taliban

“We are not winning in Afghanistan,” Defense Secretary Jim Mattis told the Senate Armed Services Committee on Tuesday morning when he was pressured by the committee’s chairman Sen. John McCain, R-Ariz., about the war’s future.

“The sacrifice of these heroes is a painful reminder that America is still an nation at war,” McCain said. “That is true in Afghanistan where after 15 years of war we face a stalemate and urgently need a change in strategy and an increase in resources if we are to turn the situation around.”

Mattis said the new plan, which could include a recommendation to deploy up to 5,000 more troops, would be unveiled by mid-July. He said the United States was already taking actions to ensure the situation did not further deteriorate and he recognized the “need for urgency” in developing a new plan.

Since the United States began combat operations in Afghanistan in 2001, more than 2,300 Americans have been killed. More than 17,000 have been wounded in action.

This year, including the three killed Saturday, six American troops have been killed in Afghanistan — all in Nangarhar province in the fight against ISIS.

Houck, Bays and Baldridge deployed with 1,400 other soldiers from the Fort Campbell, Kentucky-based 3rd Brigade Combat Team, 101st Airborne Division in the fall. Each one was due to return home by August.

Bays, 29, and Baldridge, 22, were infantrymen. They were squad leaders with the 3rd Brigade’s Company D, 1st Battalion, 187th Infantry Regiment. Houck, 25, was a forward observer, an artilleryman charged with guiding artillery and mortar fire from the front lines. He was assigned to Headquarters and Headquarters Battery, 3rd Battalion, 320th Field Artillery Regiment.

Samantha Houck said the couple met when they were just children in the Baltimore suburb of Nottingham, Md. They spent afternoons together beginning in their early teenage years roaming their neighborhood. Sometimes they would play sports with friends. Sometimes they would just talk — just the two of them.

Houck joined the Army in 2013 and quickly rose in rank to sergeant. Serving in the Army and deploying were goals of his, his wife said.

“I wanted him to follow his dreams,” she said. “I supported him in anything he would do. Anything.”

She wants their children, 5-year-old Erick Jr. and 3-year-old Violet, to remember their father as loving and doting.

“He did everything he could for them. Everything it took for them,” she said.

Like Houck, Bays leaves behind a wife and children. Bays of Barstow in California joined the Army in 2009, according to a Fort Campbell statement. He had served a previous deployment to Afghanistan.

Bays’ wife Jasmin called the soldier “the love of my life and our girls’ daddy” in a public Facebook post.

“True love, you only find once in life, and I am lucky because I found William, the most loving, kind, amazing man and best daddy you can wish for your kids,” she wrote. “The one you can’t imagine to live without. My better half, my soulmate. My best friend. The one whom my soul loves.”

The couple had three daughters, according to Jasmin Bays’ Facebook profile.

Baldridge of Youngsville, N.C., joined the Army in February 2013 and was serving his first deployment, according to the Fort Campbell statement.

In a post on her Facebook page, Baldridge’s mother, Tina Palmer, wrote Baldridge was “an amazing man” who was smart, compassionate and “probably the funniest person I know.”

“He was such a good person. Everyone who knew him, loved him,” Palmer wrote. “He was everything a mom hopes and prays their child will be.”

Baldridge graduated from Franklinton High School in 2012 and quickly entered the service.

“He made an early commitment to the military during his high school career and maintained focus and selfless dedication after graduation,” Russell Holloman, the school’s principal, said in a statement. “Our community has truly lost a hero.”

Baldridge was promoted to sergeant posthumously.

Friends and family members have set up GoFundMe pages to support the families of Baldridge and Houck.

“I want to thank everyone who has supported us through all this,” Samantha Houck said. “I want to send my condolences to the other … affected families. And I want people to know that my husband was truly one of a kind. He was one in a million.”