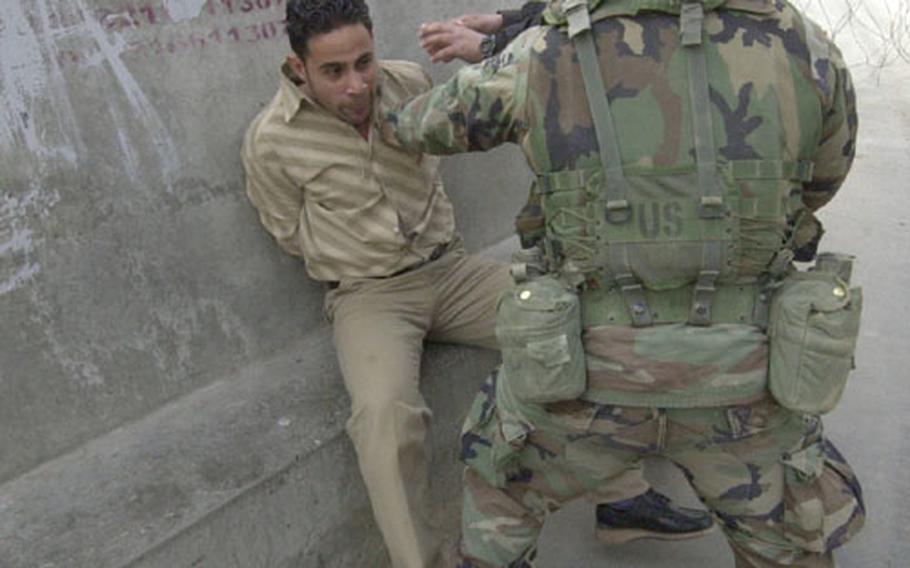 After an argument the Iraqi man (far left) pulled a pistol and was detained by U.S. soldiers near a checkpoint by the Palestine Hotel in Baghdad. (Jim Schulz / S&S)

The first incident happened around 3 p.m. when Iraqi National Congress spokesman Entifadh Qanbar and his entourage approached the hotel through a checkpoint manned by Iraqi security guards.

Fighting broke after Qanbar&#8217;s bodyguard refused to be searched, then pulled out a pistol and threatened an Iraqi security officer. The fight involved about a dozen Iraqis pushing, hitting and yelling at each other. Many of those involved were armed with an assortment of handguns and automatic weapons.

The yelling brought three U.S. soldiers, armed with M-16s, from Company B, 1-37th Armored Regiment, and a plainclothes U.S. security officer, who had also drawn her weapon.

&#8220;You are a very lucky man,&#8221; the female security officer told Qanbar&#8217;s bodyguard, after the soldiers had subdued him with zipper cuffs.

The violence at the checkpoint was the first he had seen after four two-week stints providing security at the Palestine, West said.

However, two hours later he was dealing with another incident.

This time, witnesses said a young Iraqi boy friendly with the soldiers from the 1-37th was wrestling with a young man in front of the Palestine near an M1A1 Abrams tank.

The man accidentally stood on the boy&#8217;s hand, causing him to cry out in pain and drawing an immediate response from the nearest U.S. soldier, who subdued the young man with the help of an Iraqi security guard, witnesses reported.

At that point, a crowd of angry Iraqis surrounded the soldier and several other members of the 1-37th who had arrived on the scene.

The young man was left bleeding from his head and was detained using zipper cuffs. However, he was allowed to go after the boy explained that the pair had only been playing.