Soldiers in South Korea get the gift of gear 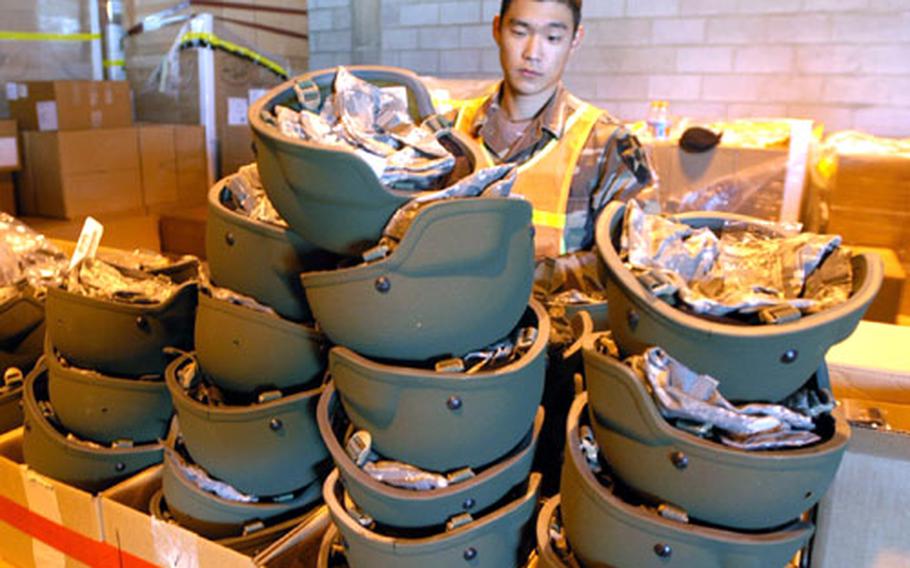 CAMP CASTLE, South Korea &#8212; Members of the 1st Battalion, 38th Field Artillery Regiment stood in small groups in a heated Camp Castle warehouse Tuesday trying on helmets and gloves &#8212; the latest beneficiaries of a massive distribution of basic military gear to soldiers on the peninsula.

The Rapid Fielding Initiative &#8212; which is handing out the latest high-tech combat gear in South Korea this month &#8212; will have equipped almost half a million soldiers worldwide by the time it leaves the peninsula, the program&#8217;s director said.

Soldiers deployed to the Sinai, Kosovo, Iraq, Afghanistan, the Horn of Africa, Qatar, Hurricane Katrina and the Pakistan earthquake have the gear, he said.

RFI is issuing 350,000 items peninsula-wide in just more than two weeks &#8212; and many, including helmets, must be sized, Thomas said.

&#8220;A piece of protective equipment, if it is not sized properly, will not protect the soldier as it is designed to. And if it is not comfortable the soldiers are not going to wear it,&#8221; he said.

Much of the gear is to protect soldiers in combat. Ballistic spectacles, for example, saved the eyesight of some 33 soldiers during a recent 1st Cavalry Division deployment, he said.

Other gear is to make soldiers more lethal. The Advanced Combat Optical Gun Sight, which has a 4X magnification, was popular with 2nd Infantry Division troops who received gear en route to Iraq last year.

Seventy 2nd ID units and 21 other units from Area I, a total of 8,200 soldiers, will pass through the camp to receive gear this month, he said.

To soldiers at the Camp Castle warehouse, it&#8217;s a bit like Christas coming early.

Pfc. Faizan Haq, 19, of Kenilworth, N.J., had his new gear, including a helmet, boots, a Camelbak and goggles, in a large black backpack as he tried on gloves with a group of other soldiers.

Weapon accessories were given to armorers, who will issue them to individual soldiers later.

Some units have told soldiers not to wear some of their new gear until they get new uniforms scheduled to arrive in January or February, Burch said.