Soldiers in Najaf skeptical about latest deal with militia 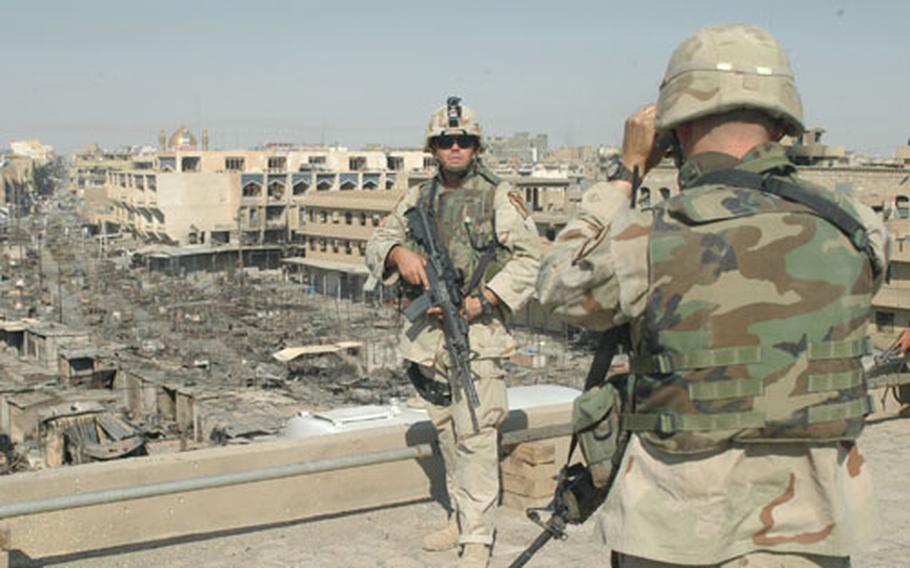 Staff Sgt. Michael Sherman, 28, of Hawaiian Gardens, Calif., has his photo taken by Sgt. Jim Davis, 34, of Kokomo, Ind., in front of the gold-domed Imam Ali mosque in Najaf, Iraq, Friday. Earlier that morning the soldiers found out that an agreement was reached to remove militia members around the mosque. (Jason Chudy / S&S)

NAJAF, Iraq &#8212; Soldiers here woke up Friday to word that the Medhi militia, holed up around the Imam Ali Shrine, was giving up after a deal was reached between religious leaders and the Iraqi government.

But despite word that fighting should be over, soldiers aren&#8217;t rejoicing. Skepticism reigns.

The cease-fire that preceded the call for the militia to lay down its arms wasn&#8217;t the end to fighting.

At least five of the battalion&#8217;s soldiers were wounded after the cease-fire, so the announcement that the fighting is over was taken with a grain of salt.

If that 30 percent holds true, the soldiers hope to leave for Camp Cooke in Taji, north of Baghdad, as soon as possible.

Plus a shower. Price and others in the company haven&#8217;t showered for nearly three weeks.

As well as a change in location, the pending move to Camp Cooke brings a change in the type of combat they can expect.