Soldiers in Jurf As Sakhir find themselves in an unexpected role 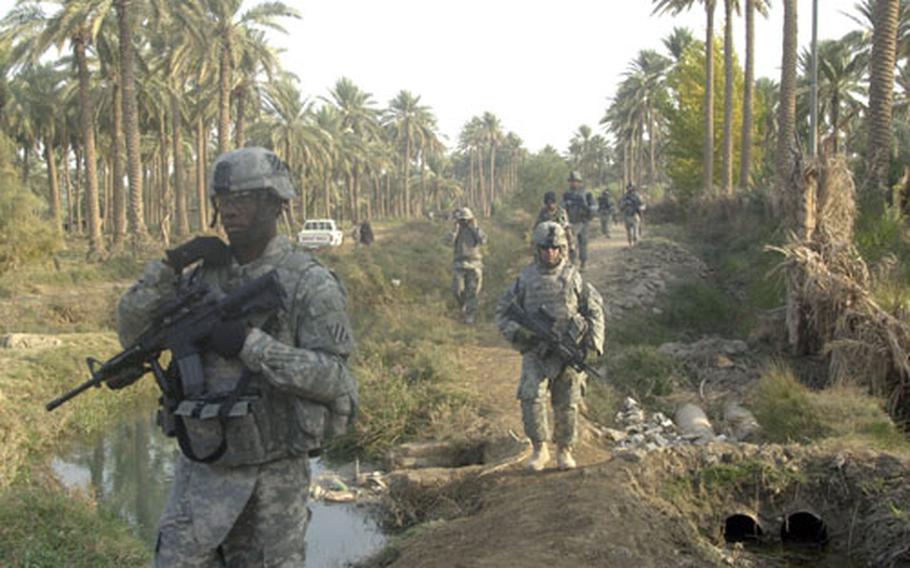 Soldiers from the 3rd Battalion, 7th Infantry Regiment, 3rd Infantry Division partol near the town of Jurf as Sakhir, south of Baghdad, earlier this month. (By Erik Slavin / S&S)

While training at Fort Stewart, Ga., they searched houses and kicked down doors. They watched for roadside bombs and maneuvered in Bradley Fighting Vehicles.

But here, these soldiers from the 3rd Battalion, 7th Infantry Regiment, 3rd Infantry Division find themselves practicing foot-patrol diplomacy and community policing alongside people they thought they were coming to kill.

Local leaders in Jurf As Sakhir freely admit that they fought against U.S. forces until about the middle of this year, but say they grew fed up with al-Qaida in Iraq. Now, like in many towns across the country, the Army pays it former foes to join &#8220;concerned citizen&#8221; groups and guard the town against al-Qaida in Iraq fighters.

But commanders say that is a far lower price to pay than losing a soldier. Jurf was deadly for the 501st Parachute Infantry Regiment of the 25th Infantry Division, which lived at Patrol Base Jurf before the current unit.

Since arriving in November, Company A&#8217;s soldiers haven&#8217;t been bombarded with bombs and bullets, civic projects are moving forward, and both Sunni and Shiite sheiks are getting along.

Company commander Capt. Eric Tisland, of Richmond Hill, Ga., knows his soldiers expected a fight more like what his company saw in 2005, when it was stationed at Forward Operating Base Falcon near Baghdad.

&#8220;At the same time, you have to be prepared for the situation to return to the way it was,&#8221; said Tisland, a former enlisted soldier on his fourth deployment since Bosnia in the 1990s.

Tisland doesn&#8217;t regret the Fort Stewart training. Bradleys can tear up roads and home invasions may not win hearts and minds, but veteran soldiers say the tactics work just fine in active engagements.

Even if it comes to that, several soldiers say they envisioned fighting on completely different terrain than the lush farmland found near this Euphrates River village.

But for now, the soldiers say relations with locals have been mostly good.