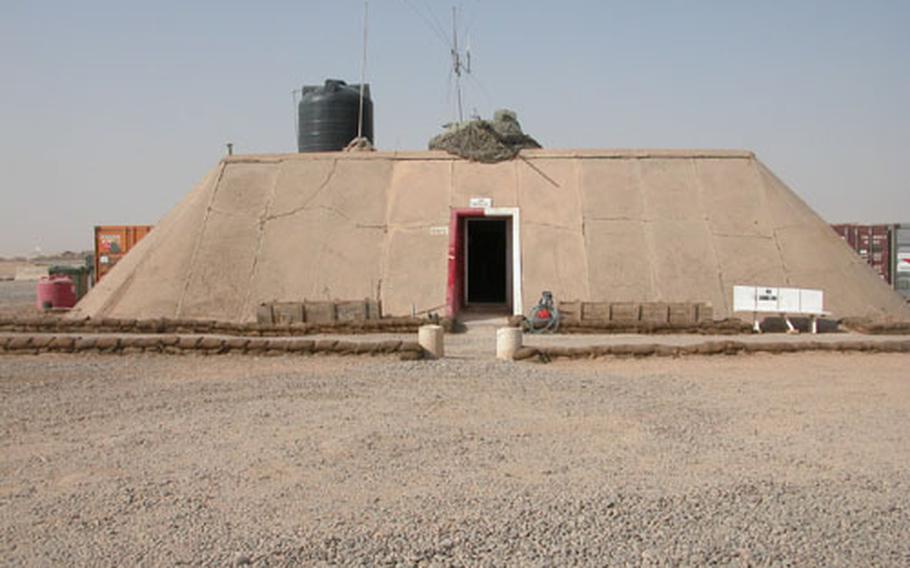 Most of the bunkers at Forward Operating Base McKenzie are used as office space, although some house soldiers. The tank turret on top of this bunker was left here by Saddam Hussein’s military during the war. (Lisa Burgess / S&S)

Most of the bunkers at Forward Operating Base McKenzie are used as office space, although some house soldiers. The tank turret on top of this bunker was left here by Saddam Hussein’s military during the war. (Lisa Burgess / S&S) 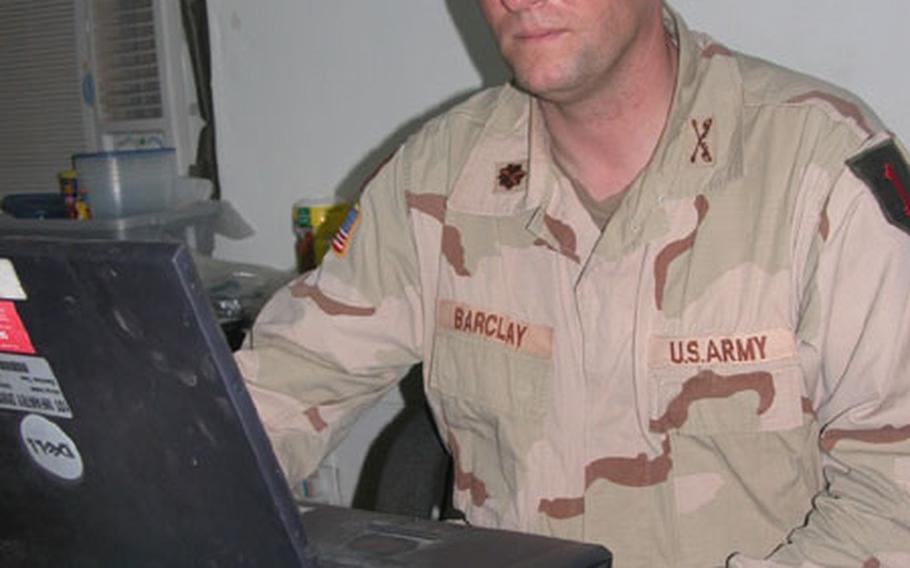 Maj. Keith Barclay, the executive officer of the 1st Squadron, 4th Cavalry Regiment, and its acting commander, still hard at work near midnight after getting up to start his day at 4 a.m. (Lisa Burgess / S&S) 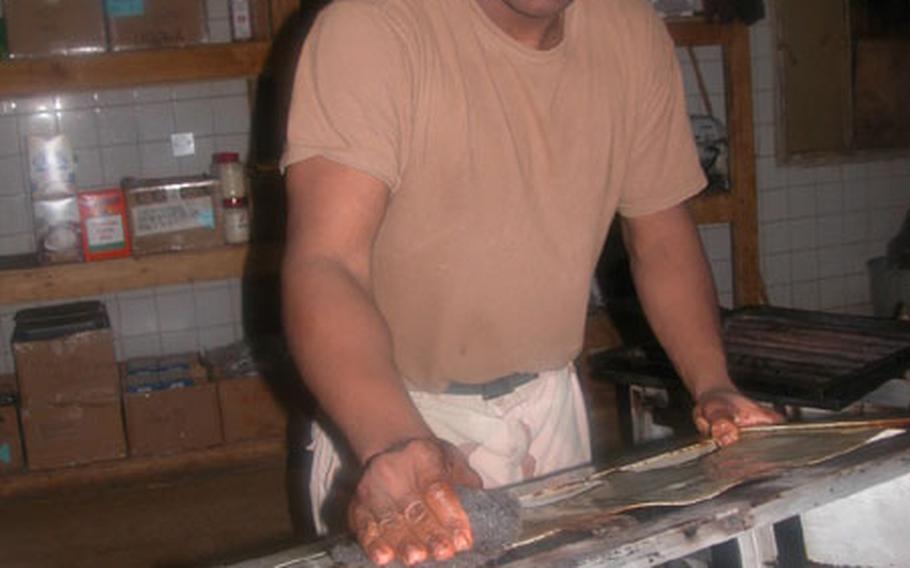 Pfc. Kerry Collier, from Chicago, Ill., and one of the cooks for the 1st Squadron, 4th Cavalry Regiment, scrubs a grill after Thursday’s chow. While the FOB kitchen is more difficult to work in than the kitchen back in the “rear,” or Germany, it is nice because “with the food precooked, all we have to do is warm it up.” (Lisa Burgess / S&S) 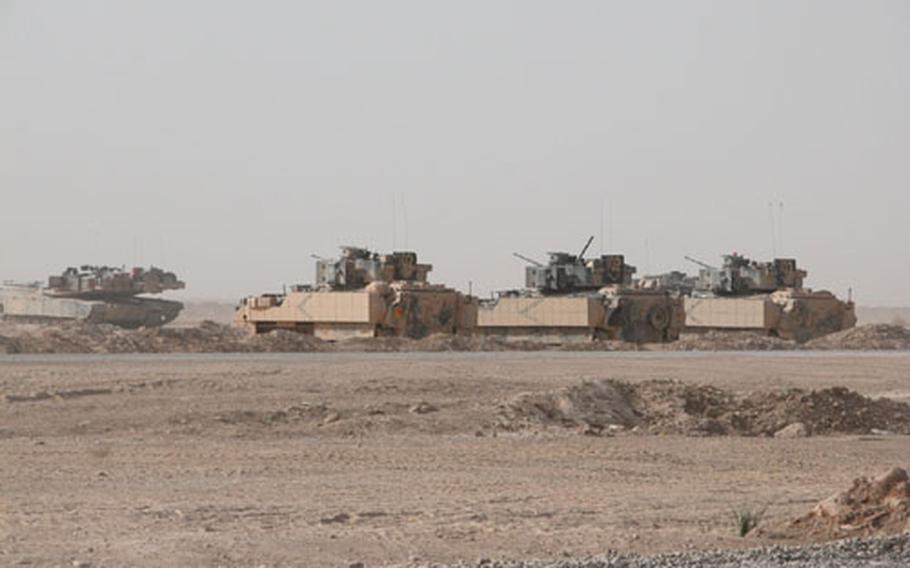 Dust and more dust. That’s what cavalrymen with the 1st Squadron, 4th Cavalry Regiment and their vehicles get used to in the austere environment of Forward Operating Base McKenzie. And sand fleas, too. (Lisa Burgess / S&S) 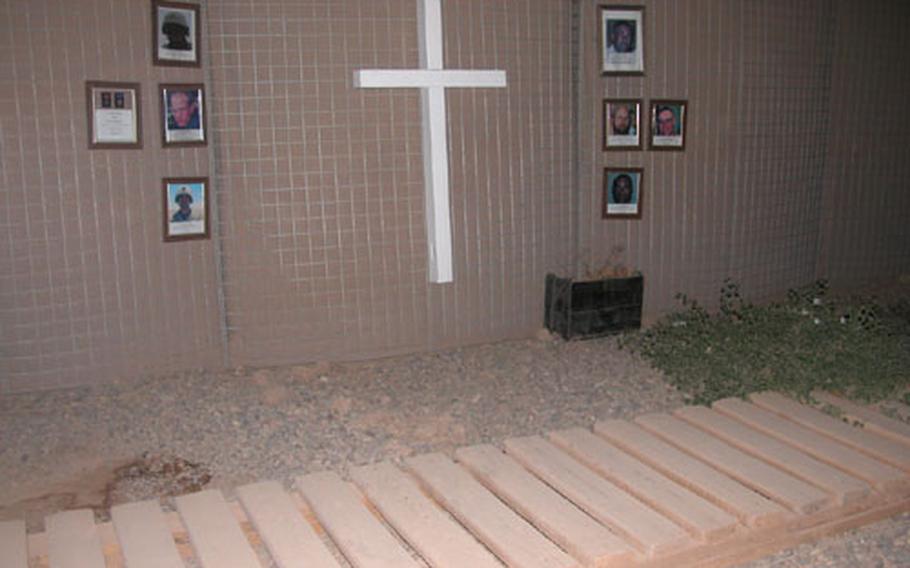 The Wall of Remembrance at Forward Operating Base McKenzie. (Lisa Burgess / S&S)

FORWARD OPERATING BASE McKENZIE, Iraq &#8212; The current home of the 1st Squadron, 4th Cavalry Regiment is on a dust pile in the middle of a desert, not far from a town where U.S. soldiers get shot at daily.

But since the Germany-based 1-4 Cav arrived in March, it has been making the place more livable &#8212; and more secure &#8212; for itself, and some of the Iraqis living nearby.

Bunkers have been cleaned out, painted and partitioned, and air conditioning and water towers added, according to Maj. Keith Barclay, the squadron&#8217;s executive officer.

Showers have been added, so that instead of one shower head for every 50 soldiers, there is now one shower for every 24 people, he said.

One of the bunkers has been transformed into a Morale, Welfare and Recreation facility, with a movie theater, performance stage, library, and Internet and phone room, among other amenities.

But much of the focus has been on improving force security, because both McKenzie and its sister forward operating base, Wilson, which is outside the town of Al Dawr, have had periods of almost nightly rocket and mortar attacks. The record was 21 rockets incoming at McKenzie in a single night in May. No one was killed.

Another problem for the 1-4 Cav troops is the town of Ad Duliyah, located directly south and almost unavoidable when driving supplies into the forward operating base, said Barclay, from North Shore, N.J.

The 1-4 Cav is responsible for an area roughly the size of the state of Delaware. It runs from Bayji, a key oil pumping facility, in the northwest, to Balad in the south. The Tigris River borders it on the east.

About two-thirds of the land is barren desert; the areas by the river are lush farmland. The squadron&#8217;s headquarters is on a dusty site officially called Samara East Airfield in Saddam Hussein&#8217;s day.

The heart of the camp is a cluster of concrete bunkers now used as offices and, to some degree, housing, although at least two-thirds of the soldiers live in &#8220;contained housing units,&#8221; or trailers, and others live in heavily sandbagged tents.

About a mile from the main encampment, there is an airfield, which is necessary because cavalry squadrons have their own air assets: Kiowa Warriors, small, extremely agile two-seat helicopters that &#8220;really add a lot to the fight,&#8221; said the squadron personnel officer, Capt. Nathan Springer of Oklahoma City.

The squadron took over the place from the 3-29th Field Artillery, part of the 3rd Battalion of the 4th Infantry Division.

The 3-29th did, however, help make the airfield habitable. Most of what Saddam&#8217;s military stored here, apparently, was ammunition. The artillerymen blew up something like 60,000 rounds, Barclay said.

While improving its base, the squadron is also working on improving life for the Iraqis living nearby.

&#8220;A large part [of the squadron&#8217;s] focus is on civil-military operations,&#8221; according to Maj. Michael McCurry, the deputy squadron commander.

McCurry, from Mountain Home, Idaho, has a very unusual qualification. He was county commissioner for three years in Idaho before rejoining the Army after the Sept. 11, 2001, terrorist attacks. That means he knows more than most Army officers about how local governments run.

But, he said, that doesn&#8217;t make it any easier to deal with the tangle of U.S. government, nongovernment, Iraqi government, and U.S. Army funding streams for civilian projects.

&#8220;Deciphering all these organizations out there to get the funding&#8221; for civilian works is probably his biggest challenge, McCurry said.