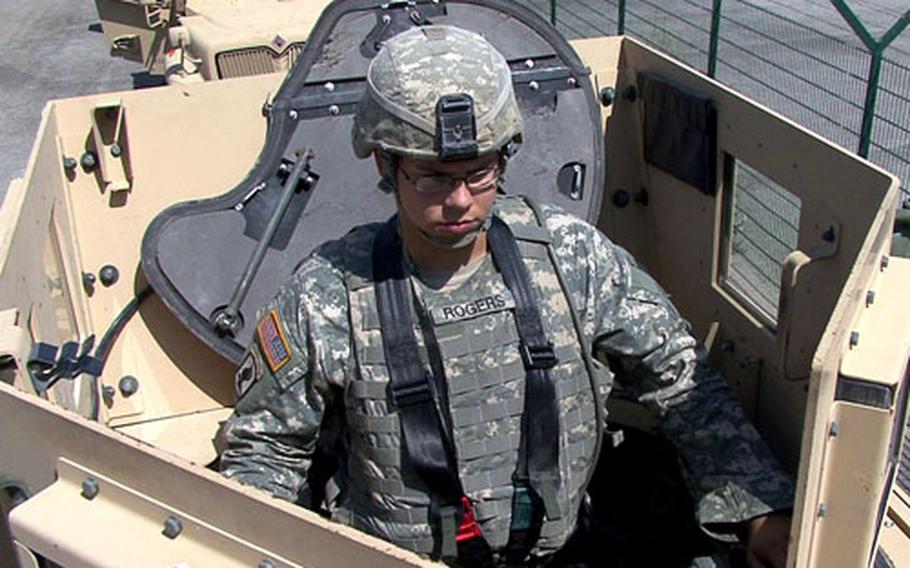 A soldier demonstrates the Gunner Restraint System in the gun turret of an MRAP vehicle. About 75 soldiers took part in the Army&#39;s first MRAP Operators Course in Europe July 28-31, in Hohenfels, Germany. (Christian Marquardt / U.S. Army)

HOHENFELS, Germany &#8212; Even with modifications designed to make the Army&#8217;s Mine Resistant Ambush Protected vehicles more maneuverable, there are still places in Afghanistan the personnel carrier won&#8217;t be able to go, according to an Army spokesman.

Last week, 173rd Airborne Brigade soldiers got to sit in the driver&#8217;s seat of the first MRAPs fielded in Europe as the unit prepares for a deployment to Afghanistan. However, the gently rolling, pine-covered hills of Germany&#8217;s Joint Multinational Readiness Center are a world away from the jutting, snow-capped mountains and rugged valleys of Afghanistan.

And while the Defense Department has contracted with Oshkosh Corp. to provide more than 2,200 MRAP All-Terrain Vehicles to soldiers and Marines in Afghanistan, the Italy-based 173rd troops will likely be driving the MRAP&#8217;s &#8220;Dash&#8221; model during their upcoming deployment, said James Johnson, a civilian contractor who is training soldiers to operate and maintain the MRAPs at Hohenfels. Johnson was watching the 173rd&#8217;s support battalion train that day.

During last week&#8217;s training, the soldiers stuck to the training area&#8217;s gravel roads, practicing scenarios such as reacting to roadside bombs and ambushes, according to Capt. Derek Hoffman, a senior maintenance observer controller. That&#8217;s the sort of driving that the 173rd soldiers are likely to do in MRAPs downrange, according to Maj. Nick Sternberg, JMRC spokesman.

The Pentagon has not yet announced where in Afghanistan the 173rd will deploy.

Commanders will choose the most heavily armored vehicle they can to protect their troops, but some areas are simply too rugged for the MRAP, Sternberg said.

The new M-ATVs &#8212; which could start reaching troops in Afghanistan next month &#8212; are meant to be light enough to go off-road while maintaining the V-shaped hull that provides protection against blasts from underneath. They also have an independent suspension system that will allow them to go off road into areas that conventional MRAPs cannot venture.

Still, no matter the modifications, there will be places that MRAPs can&#8217;t access, Sternberg said.

The same features that help protect soldiers inside the MRAP from roadside bombs &#8212; heavy armor and a V-shaped hull &#8212; give it a high center of gravity that&#8217;s not ideal for negotiating uneven ground.

The vehicles are rated to negotiate a 30-degree slope to either side.

&#8220;We teach them any time you start to go over an incline, if you ever lose control of the vehicle you always want to steer into the fall off. You never want to steer away because that is how you get rollover. Whenever you get problems, always slow down,&#8221; he said.

Dunbar said Humvees are faster, but MRAPs gives soldiers a sense of security.