Soldiers in Germany get a treat as chefs practice for contest 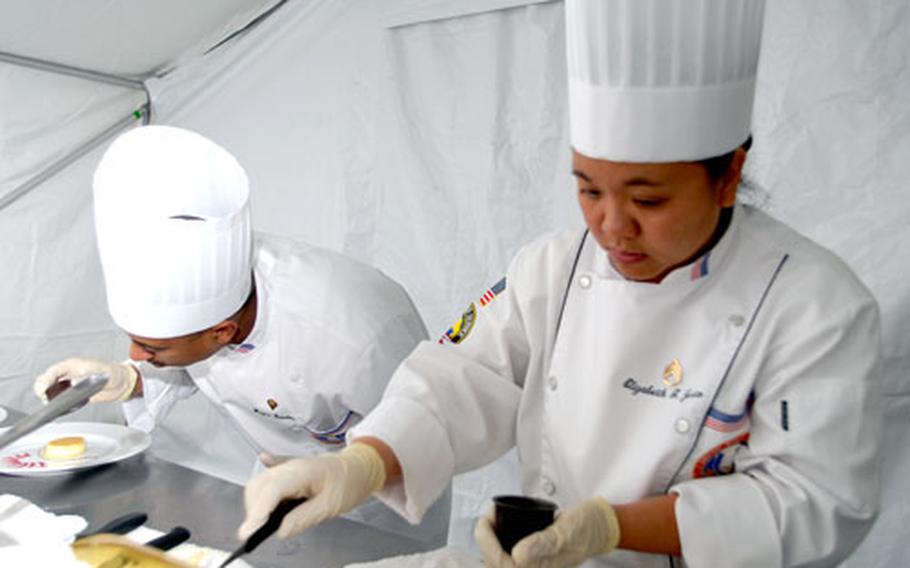 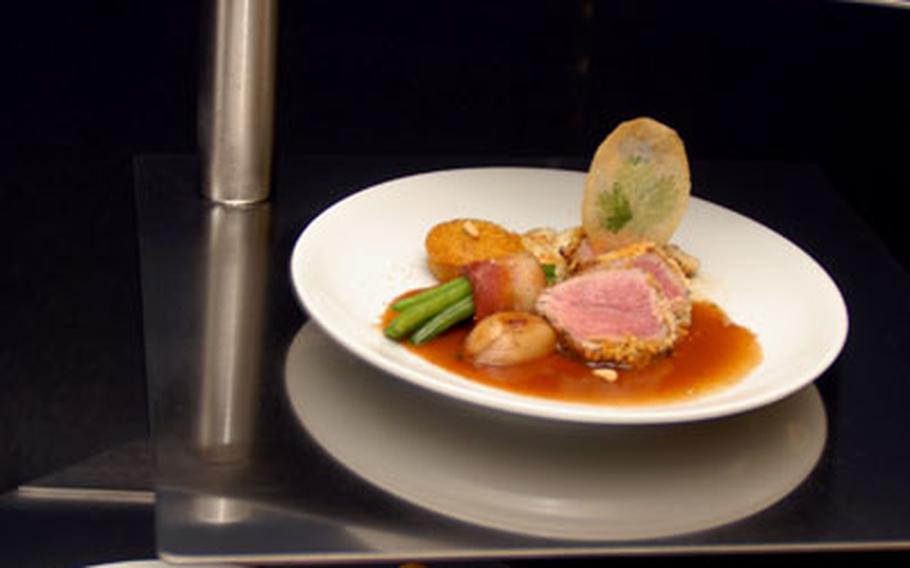 The U.S. Army Culinary Arts Team cooked up a practice meal Camp Aachen in Grafenwöhr, Germany, on Wednesday in preparation for the Culinary World Cup in Luxembourg later this month. The three-course menu included cream of rabbit soup and roasted rabbit tenderloin, bottom, a pine nut-crusted veal loin and squash soufflé, middle, and a dessert of cream caramel with macerated fruit and chocolate. (Seth Robson / S&S)

GRAFENW&#214;HR, Germany &#8212; The U.S. Army Culinary Arts Team is cooking up something special for this month&#8217;s Culinary World Cup in Luxembourg, and U.S. and German soldiers got a taste of it when the team prepared a practice meal at Camp Aachen on Wednesday.

In a tent used as a kitchen by the Army cooks, Sgt. Jesse Ward, 29, who normally works at the Pentagon, brewed up a huge drum of rabbit soup to go with the tenderloin.

&#8220;Everybody could use a little more rabbit. It is like a better-tasting chicken,&#8221; he said, as the tent filled with steam from the simmering broth.

The cooks used whole rabbits that had been skinned and gutted. They use the entire rabbit, including its head and organs, for the soup, the Boerne, Texas, native said.

&#8220;You could feed an entire battalion with rabbits,&#8221; he said, adding that Kentucky fried rabbit would taste great.

&#8220;It wasn&#8217;t so much that we were after rabbit, but we were looking at the flavor profile for all three courses. We went through different flavor combinations. After you eat this meal you have gone through a wide range of tastes and textures,&#8221; he said.

Despite its excellent taste, rabbit is not popular with soldiers, said Sparks, who works at the Army Center of Excellence Sustenance at Fort Lee, Va.

&#8220;We actually have rabbit in the [Army dining] system. It is served in certain dining facilities but we found that rabbit is not a big seller among our troops. If we had it in a [Meals, Ready to Eat], it wouldn&#8217;t be a popular choice,&#8221; he said.

The culinary arts team represents the Army&#8217;s best chefs. It was selected from individual soldiers who tried out &#8212; by cooking a four-course meal for 10 in four hours from a box of mystery ingredients &#8212; at the U.S. Army Culinary Arts Contest in March.

At the World Cup, the U.S. team will go up against military teams from 10 other nations.

The team will cook its meal and prepare a selection of cold food on Nov. 19 for 100 people who pay 30 euros each for the privilege of tasting it, Sparks said.