Soldiers in Baumholder get fitted for new tactical vests 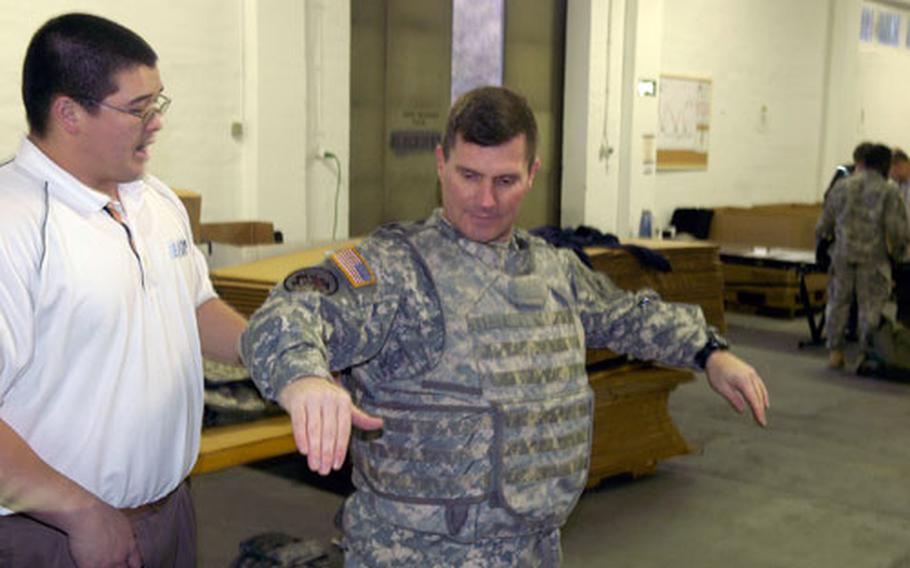 First Sgt. Michael Morton of the 1st Battalion, 6th Infantry in Baumholder tests the flexibility of the Improved Outer Tactical Vest, which the 2nd Brigade, 1st Armored Division is being issued before its upcoming deployment to Iraq. (John Vandiver / S&S)

BAUMHOLDER, Germany &#8212; The new Improved Outer Tactical Vest, complete with a quick release mechanism, would have come in handy when 1st Sgt. Michael Morton was wounded during his previous tour in Iraq.

&#8220;I definitely could have used it,&#8221; said Morton, who was among the group of Baumholder soldiers being outfitted Tuesday with the new body armor.

When he was wounded, the old bulky vest proved difficult to remove when medical treatment was needed, Morton said.

But with one pull, the new vest releases into two pieces, making it easier for medics to get to work on injuries and for soldiers to shed it quickly, according to the Army.

Soldiers from the 1st Battalion, 6th Infantry Regiment were issued their new vests Tuesday. The vests were the first to be handed out to the soon-to-deploy soldiers of the 2nd Brigade, 1st Armored Division.

The soldiers of the 2nd Brigade, who are slated to deploy to Iraq this spring, also are among the first from U.S. Army Europe to be issued the equipment, said Maj. Wayne Marotto, the unit&#8217;s public affairs officer.

A couple hundred soldiers gathered at the post&#8217;s equipment room to receive the equipment and get a briefing on how it works.

The new vests, which weigh three pounds less than the Outer Tactical Vests soldiers were previously issued, also provide added protection, according to the Army. The gear includes an additional 52 square inches of cover in the rear, protecting the kidneys.

Other improvements include a waistband that does a better job of distributing the weight around the body.

The old vest weighed soldiers down around the shoulders, said Staff Sgt. Adam Manganello, &#8220;It (the new vest) feels really good,&#8221; he said.

The new vest is cut higher in the armpit area, eliminating the need to attach the axillary protector to the deltoid axillary protector set. As a result, one&#8217;s arms can relax closer to the body instead of being pushed out, soldiers said.

And in addition to the quick release for emergencies, the new vests also provide an opening on the left shoulder, which allows access for medical treatment while still providing protection to the patient, the Army said.

A complete set of body armor with plates, deltoid axillary and groin protectors and side plates costs up to about $2,700, officials say.