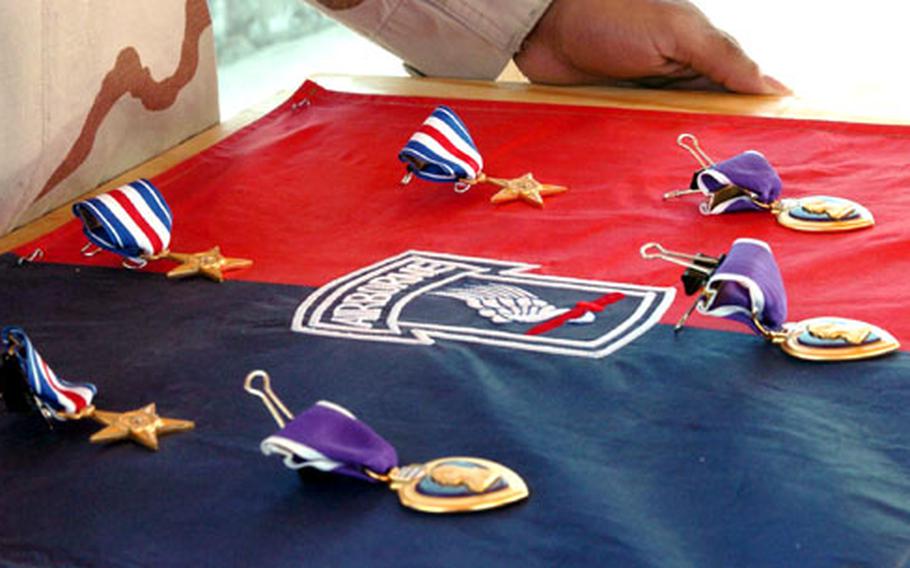 Three Silver Stars and three Purple Hearts are prepared for presentation to soldiers from the 173rd Airborne Brigade prior to an awards ceremony held Nov. 30 at Kandahar Airfield, Afghanistan. (Jon Arguello / U.S. Army)

Three Silver Stars and three Purple Hearts are prepared for presentation to soldiers from the 173rd Airborne Brigade prior to an awards ceremony held Nov. 30 at Kandahar Airfield, Afghanistan. (Jon Arguello / U.S. Army) 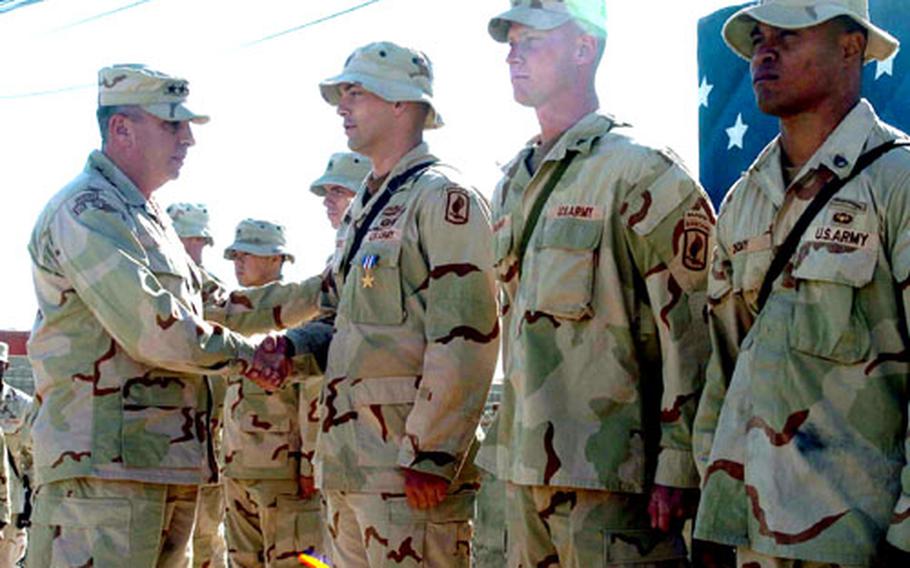 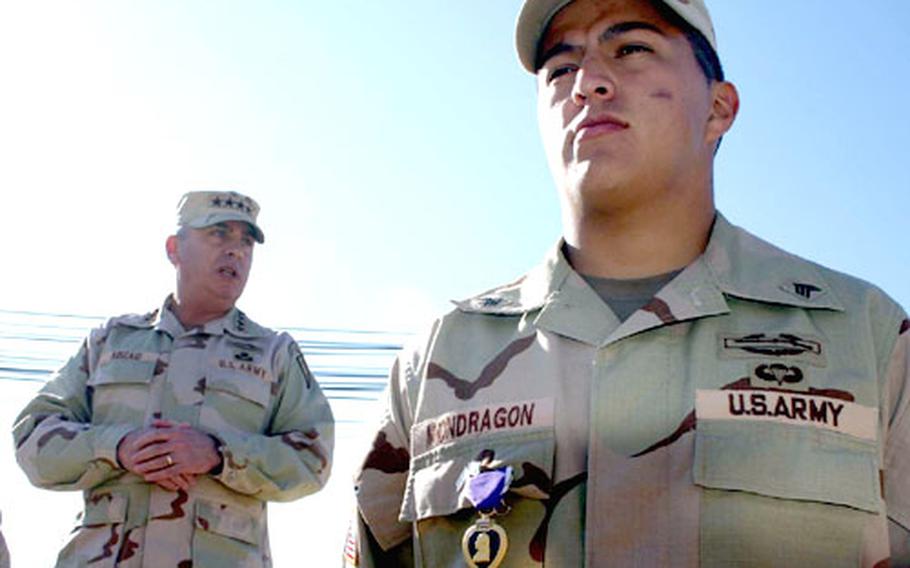 Three soldiers assigned to the 2nd Battalion, 503rd Infantry Regiment received the Silver Star on Wednesday for their actions during a gunbattle in Afghanistan in May.

Blaskowski and Choay are members of Company C, while Brannan is assigned to the battalion&#8217;s headquarters company. All three are based in Vicenza, Italy.

On May 3, the battalion&#8217;s scout element came into contact with enemy forces in the Arghandab River Valley. An air assault was then launched by other elements of the battalion, and at least 37 enemy combatants were reported killed in the engagement.

According to his award citation, Brannan led the scout team that day. He signaled the battalion and was told to maintain contact with the enemy to avoid their escape.

Pursuing a foe judged to be 10 times the numbers he led, Brannan&#8217;s small group came under fire, the citation reads. He and three other soldiers traded fire with the enemy from a group of boulders after their vehicle was destroyed by rocket-propelled grenades. He coordinated the fire of his separated units by running back and forth between the groups until other forces arrived via helicopter, according to the citation.

Choay received his award for leading a series of assaults against enemy positions under heavy machine-gun fire. At one point, he was hit in a leg by a rocket-propelled grenade, according to his citation. Separated from other elements of the company, he continued to attack enemy positions and eventually was credited with eight of the 13 combatants he and his men killed.

Choay gave credit to his squad and fellow paratroopers for their actions that day.

Blaskowski directed two machine-gun teams into position under heavy fire by enemy forces, where they maintained the tenuous position, effectively pinning down dozens of enemy combatants, while under heavy fire, according to his award citation. During a three-hour battle, Blaskowski suffered a leg wound while coming to the aid of one his soldiers.

Since U.S. troops entered Afghanistan in 2001, the Army has awarded 40 Silver Stars, according to Army records. Ten &#8212; or one-fourth &#8212; of the Silver Stars have been given to members of Combined Joint Task Force-76 since the Southern European Task Force (Airborne) took over in March. Four came posthumously.

&#8220;The actions of these three men not only directly and significantly contributed to the success of numerous individual engagements in Northern Zabol Province on May 3, but also were singularly decisive in the overall victory of the entire battle,&#8221; he said in a statement issued by the command&#8217;s public affairs office.