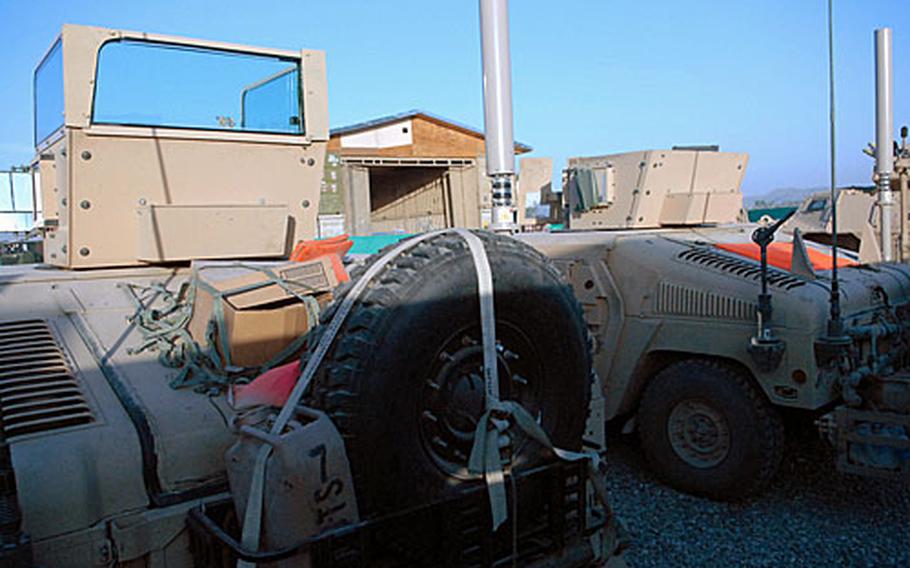 The Humvee on the left has the new turret modifications with additional side and rear protection shields. Three Humvees have received the new enhancements, "but these changes will eventually be the standard for the 173rd," said U.S. Army Chief Warrant Officer 3 Sean Mager. (Les Neuhaus / S&S)

The Humvee on the left has the new turret modifications with additional side and rear protection shields. Three Humvees have received the new enhancements, "but these changes will eventually be the standard for the 173rd," said U.S. Army Chief Warrant Officer 3 Sean Mager. (Les Neuhaus / S&S) 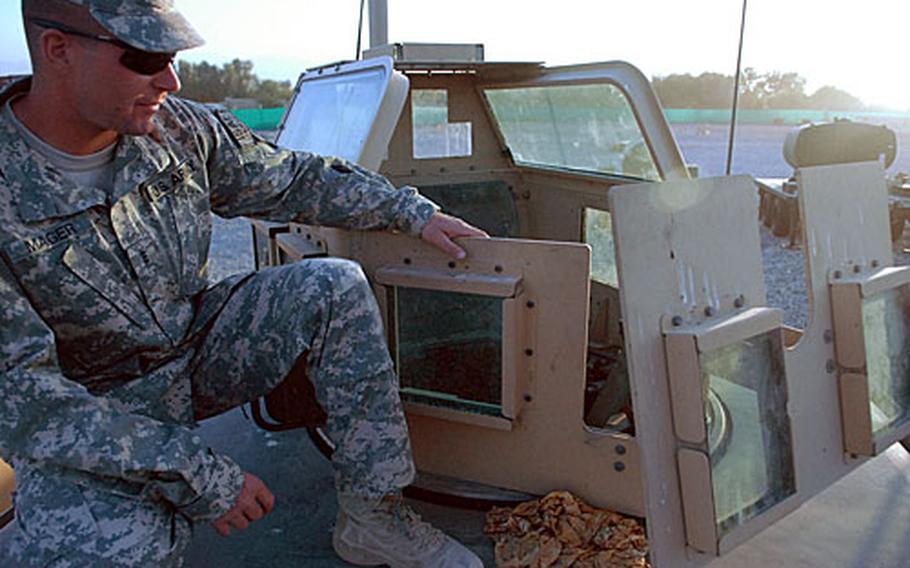 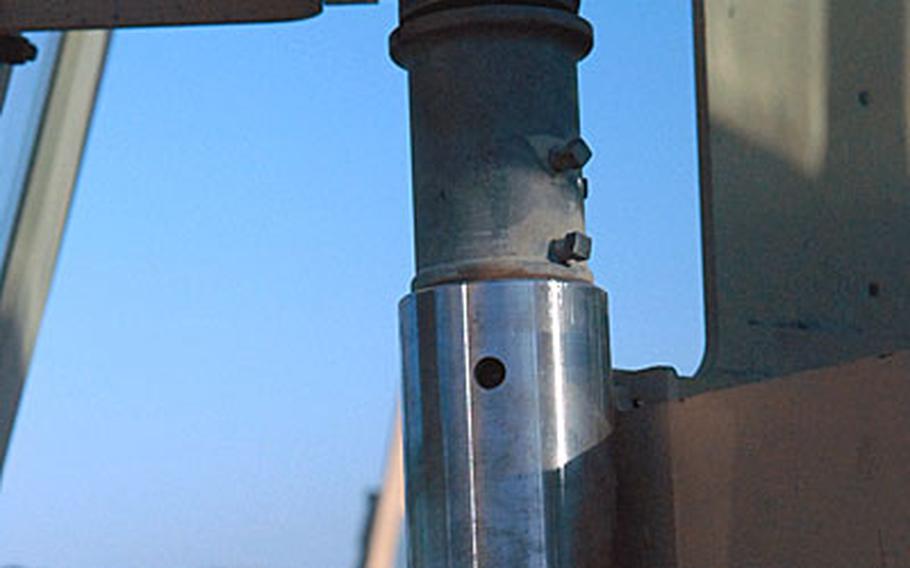 A spacer and bearing sleeve have dramatically increased turret gunners&#39; ability to fire overhead in Afghanistan. Many firefights with Taliban or al-Qaida fighters in the mountainous country often occur as troops pass on roads in between ridge peaks, forcing U.S. troops to fire at higher angles. (Les Neuhaus / S&S)

JALALABAD, Afghanistan &#8212; Three modifications made by soldiers in northeastern Afghanistan are being made throughout a fleet of up-armored Humvees to protect the gunner better and improve firing ability in the turret, U.S. military officials said.

Building up the turret&#8217;s protection wall; adding a secondary weapon swing-arm attachment; and creating the ability to point the primary weapon at a steeper angle all are new additions being made to protect soldiers who slog it out every day fighting Taliban and al-Qaida rebels.

&#8220;Everybody has known that all of these problems have been an issue, but every turret that comes out still doesn&#8217;t have overhead and side protection, or this other modification &#8230; to the primary gunner mount,&#8221; said U.S. Army Chief Warrant Officer 3 Sean Mager, 34.

Mager, a native of St. Louis, is a member of Company B of the 173rd Airborne Brigade&#8217;s support battalion.

The turret has undergone several changes through the Army Materiel Command and the Tank and Automotive Command, both of which normally handle changes to heavy vehicles within the Army, according to military officials. But the particular challenges of fighting in Afghanistan have been known for six years, soldiers said.

In the late 1980s and early 1990s, all a turret gunner had for protection was the &#8220;chicken plate,&#8221; as soldiers commonly refer to the old steel shield placed in front of the soldier atop the Humvee. Nothing else existed on the side, back or overhead.

The wars in Iraq and Afghanistan have shown the need for more protection for troops manning heavy weapons in the turrets.

Mager and his soldiers, who dabble in various welding, fabrication and machinist-type tasks, made the enhancements at the urging of soldiers complaining of too little protection and the inability to point the heavier, primary weapons at a steeper, higher angle.

Troops in Afghanistan often are targeted by Taliban fighters from higher ground. This sometimes forced soldiers to abandon the primary weapon and take up a lighter, hand-held weapon, such as the M-240 Bravo, which fires a 7.62 mm round in automatic sequence.

Now the troops can point the barrel of the main gun much higher. Mager&#8217;s men made this possible by adding a spacer on the mount and an additional bearing sleeve to the placement mechanism holding it all together.

&#8220;It was the first thing I noticed &#8212; it allows me to scan the mountainside better,&#8221; said Spc. Jason Carletti, 26, and from Zanesville, Ohio, who tested the newer modifications on a predawn patrol Monday.

Carletti suggested a locking mechanism of some sort, in order to better hold the swing arm in place while the vehicle is moving.

In the end, the effort to make modifications to equipment used in combat is a team effort, said U.S. Army Maj. Timothy McDonald, 36, who works with both the Army Materiel and Tank and Automotive commands.

&#8220;As the soldiers come up with these ideas, then there is action, which is quickly taken up the chain [of command] &#8212; it&#8217;s a continuous process,&#8221; the Killen, Ala., native said from Forward Operating Base Fenty in Jalalabad, roughly 70 miles southeast of the capital, Kabul.

However, he could not explain why the changes were just being made after six years of fighting by U.S. troops in Afghanistan.

&#8220;It was identified that these weapons systems could not engage [the enemy] to a higher elevation, so the task force itself, here in Afghanistan, came up with the modification,&#8221; McDonald said.

Commanders were unavailable for comment on the turret modifications.

Three Humvees have undergone the modifications, according to Mager. He originally had the idea while previously deployed to Iraq with the 3rd Infantry Division.